This page details one or more prototype versions of Pokémon FireRed and LeafGreen.

This page is about the debug builds of Pokémon FireRed and LeafGreen.

Every combination of version and language of the mass-produced games has its own debug equivalent; strictly speaking they are not prototypes, but rather the same source code as the commercial version with different compile-time settings.

The in-game help, ordinarily accessed by pressing L or R at almost any time, can only be accessed via the L button to avoid unnecessarily conflicting with the R+Start button combo that opens the Debug Menu.

Additionally, if the game was loaded by pressing R+A on the Continue option (or by selecting one of the preset saves from the first option in the Test Menu), the player can run through walls and ignoring event triggers by holding R as they move; they can also press R+Select to warp to preset locations (the Viridian Pokémon Center and select Kanto cities, some of which at illogical coordinates). 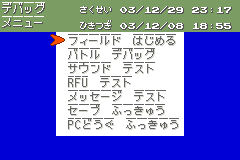 In the Japanese versions, most [font] characters are overlined, presumably to readily identify their width. 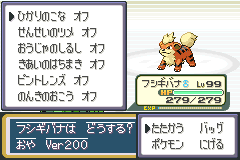 In the Japanese version, what is allegedly a version number is displayed on the Fight/Bag/Pokémon/Run screen.

At that point, pressing Start allows viewing the opponent's HP, whereas pressing Select opens a menu (containing boolean options) that can be closed with Start. 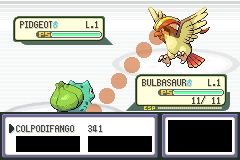 Pressing Start while selecting a move allows for selecting any move for animation playback (with Start or Select); there is no way to exit this feature.

Any battle can be instantly worn by pressing R+Select.