Pokémon Colosseum is a weird combination of Final Fantasy and Pokémon. GOTTA SAVE 'EM ALL, MAN!

There is a small debug function that can be activated with the following Action Replay codes:

With the code activated, pressing D-Pad Up will show or hide a bar that has Japanese instructions on how to use the debug function. Pressing the L button will cycle between pause (instant stop), slow (low frame rate), and play (regular speed). Pressing R will pause the game, like when pressing L sometimes, but is more accessible and doesn't need to be cycled to. 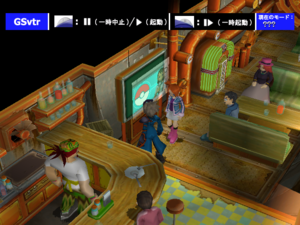 Kecleon, Minun, Spoink, Baltoy, Castform, Psyduck, Teddiursa, Wobbuffet, Wailmer, Porygon2, Xatu and Whiscash cannot be obtained as Shadow Pokémon. Baltoy, Teddiursa, Magcargo, and (technically) Psyduck and Xatu, however were introduced as Shadow Pokémon in the sequel Pokémon XD: Gale of Darkness. Interestingly, one of the game's early Japanese commercials showed the main character with a Castform on his team, which could be related to when it was originally slated as a Shadow Pokemon.

A dialogue string, meant to be said by the girl ("Eh!? Chimecho isn't a Grass Pokémon... It's a Psychic Pokémon."), might be related to the Shadow Grass Pokémon King.

For the sake of consistency, every Pokémon in every Pokémon game is given a Shiny variant, and Celebi is no exception. However, because the only way to obtain it legitimately was through distributions, the Shiny version of Celebi was left unobtainable through normal means.

Although the e-Reader content was removed from the international versions, the theme used for the menu screens, "virtual", can still be found on the disc. 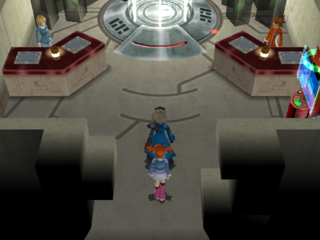 After completing the main story in the Japanese version, players could access the "Card e room" via the left door in the Phenac Stadium lobby, where they could battle VR Trainers by scanning Battle e cards. In international versions, both doors in the lobby lead to the battle area, though the Card e room is still seen in the demo that plays after waiting on the title screen. However, the Card e room is present yet inaccessible in international versions. There are translation mistakes like not capitalizing the first letter in the game's name. The word e-Reader uses a different letter "e" not seen elsewhere.

If you have gained access to the Card e room in the US version, you are able to use a Japanese e-Reader and e-Reader cards to battle VR Trainers. As the e-Reader itself is Japanese, all text on the e-Reader will be displayed in Japanese. You can not use an English e-Reader, and English e-Reader cards were never made available. Translation is nearly complete, with Japanese text still being displayed for the name of e-Reader cards that change the stadium, for the difficulties, and for the title card in the top left of the menu. In order to gain access to battles, you must load a program from the game onto the e-Reader. This program must be loaded from the US version, trying to use the program loaded from the Japanese version will not work.

In the European version, the game is unable to connect to the e-Reader. The Card e room's NPC dialogue is missing, and they will only display empty text boxes when interacted with.

To enter it, visit the basement of the Phenac City Pokémon Center with this Action Replay code.

(Source: Ralf@gc-forever (US and EU)) 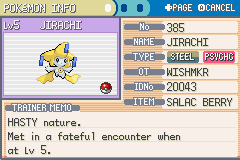 In the Game Boy Advance multiboot file sent from the WISHMKR Colosseum Bonus Disc, support for FireRed and LeafGreen (as well as Japanese versions for all games) is actually present and fully working. However, support for these games, either intentionally or by accident, is disabled by default. Internally, the function which checks the inserted game's ID will return a bitmask depending on which game is inserted. Bit 0 is set if the game is non-Japanese. Bit 1 is set when an out of region game is inserted. Bit 4 is set for Ruby or Sapphire, and Bit 5 is set for FireRed or LeafGreen. When returned value is checked, however, it will check to make sure bit 0 is set, and then bit 4 must be set as well. By dumping the multiboot file, decompressing the main code, and then nopping out 020134CC (to allow Japanese games) and 020134D4 (to allow FireRed/LeafGreen), the WISHMKR Jirachi can be transferred to all US and Japanese Pokémon games except Emerald. Support for Emerald is seemingly missing, however it was also released much later than Colosseum.

Content from the Japanese bonus disc (such as the Celebi event) was left in the full game. In the US version, its translation is incomplete as various graphics remain Japanese. "LIGHT BALL" is misspelled "LIGHTBULB" when receiving the event Pikachu.

The European version is considerably buggier. Its additional issues include missing text and corrupt graphics.

This Action Replay code will make it appear upon starting the game.

(Source: Ralf@gc-forever (US and EU))