From The Cutting Room Floor
Jump to navigation Jump to search
This page contains changes which are not marked for translation.
Other languages:
English • ‎italiano • ‎한국어

Pokémon Trading Card Game is a Game Boy rendition of the classic card game played on schoolyards around the world.

While all the text displayed is in capital letters only, the text in the American version of the game is actually stored in mixed case ASCII. There is a hidden switch to enable the use of small letters, by using the GameShark code 00000DCD. This also makes it the first game to spell the word Pokémon as "Pokémon" and not "POKéMON", at least internally. The European versions, however, have all their text stored in upper case only.

There is also an unused room located behind the duel room in Challenge Hall. It resembles some sort of storage room, and the doors may have led to it earlier in development. All that remains is a basic layout.

Screenshot of the debug menu visible in the start menu.

The main debug menu was accessed from the in-game start menu. While the menu at 04:43D2 was commented out before release—as evident by a single ret—at least the look of it can be recovered by using the following Game Genie codes:

There is also a start-up debug menu. While it can also be called in-game (since it has a quit option), the actual game boots using this menu's sub-routine. Use the following codes to activate it:

Since the European versions are multi-language, you will have to either have a save game with the language set, or you will have to skip the menu the first time around, otherwise it will display the wrong (gibberish) string, as the game doesn't default to any language when confronted with an invalid language setting. It's notable that in all versions, all options of this menu have been translated.

This will boot the game as usual.

This switches between the two duel modes.

This option will skip the title screen and directly put you where you last saved. If there isn't a saved game, it will start from the beginning.

This test seems to be gone for good. It calls a single ret. Judging from the name, this option was there to test various color features. 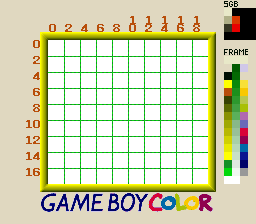 This test SGB Frame shows the using palettes and a dash grid over the whole screen to mark tile boundaries.

This will show the standard language menu, either in English-German-French or English-Spanish-Italian, depending on the version of the game.

This option will start a sprite viewer.

This test is also gone. It calls a single ret. Judging from the name, this option might have tested hdma effects or vertical windowing effects (as used in the credits).

This menu allows one to generate random booster packs. This was possibly done to check if the random seed tables were correct and correct sets of cards were generated.

This will play the credits.

This option will quit the menu. If the menu was called from the boot-up code, it will reboot the game and then display this menu again. Else, it will work as expected.

More debug strings were left over, though:

There are two unused Super Game Boy borders that can be accessed from the debug menu. Game Genie code CA1-7FB-D5D will keep the selected initial border throughout the game. Turn on after the selected border is displayed or the initial border will be absent. 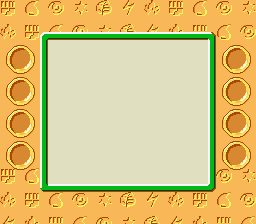 An alternate palette likely leftover from testing from when they were deciding what palette to use. Game Genie code 020-1FB-E6A will load this border at startup.

Used for testing border coordinates and palette usage. All palettes that were loaded into the SNES's VRAM while the border is loading will display on the SGB section of the border. Game Genie code 030-1FB-E6A will load this border at startup.

The images of the boosters that appear during the intro were changed outside of Japan to reflect the appearance of those distributed in the relative region.

The Japanese SGB border has writing on the Poké Ball outline, which was removed from all subsequent releases abroad.

The back of the cards was changed outside of Japan to reflect the appearance of the cards distributed abroad.

Jynx's Lv. 23 design was revised to be purple rather than black in international versions, due to unfortunate similarities to the blackface stereotype.

In the US version, both Ninetales cards misspell its' name "Ninetails". This was corrected in the European version.

Oddly, the description for Base Set Ninetales' Fire Blast does spell its name correctly in the US version.

The Nintendo 3DS Virtual Console version does not emulate the Game Boy Color infrared hardware, leaving the Lv. 15 Mew and Lv. 64 Venusaur unobtainable via Card Pop! and no way to assemble the Mysterious Pokémon Deck from the Pokémon Dome deck machine. Due to Card Popǃ being disabled, a bookcase in Ishihara's House cannot be interacted with as it refers to the "Phantom Cards" from using Card Popǃ. In addition, trying to interact with the Clerks at each Club for the Battle Center and the Gift Center will act as if the Clerks are not present, due to the game disabling the Battle Mode and the Trade Mode as all Game Link Cable features are neither supported nor emulated. Furthermore, since the Game Boy Printer cannot be used, the "Print" function from the PC has been disabled, the only change that is directly mentioned in the manual for the game. Also, because the game is locked in Game Boy Color mode, it cannot be played in monochrome Game Boy mode or with its Super Game Boy borders.

As with Pokémon Snap, Lv. 23 Jynx has been altered to closer match the newer design of the Pokémon. The face, hands, and the background were changed from dark purple to a lighter shade of that color.