PokéPark 2: Wonders Beyond is the sequel to PokéPark Wii: Pikachu's Adventure, it features Pokémon from Black and White, and stars Pikachu, Oshawott, Snivy, & Tepig. The four must go solve a mystery to save the world, all while making & playing with new friends they meet along the way. It's like Twitter... for Pokémon. But with a lot more black holes.

Found in the Field folder are some early versions of maps. 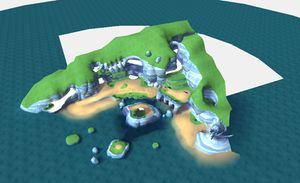 Here is the first map, it seems to be an early version of Seasong Beach. 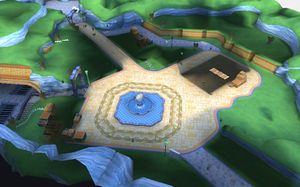 An early version of what appears to be Cove Town. 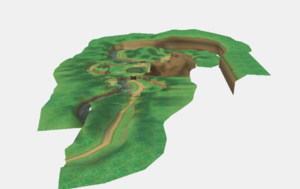 An early version of Windmill Way in the Arbor Area. 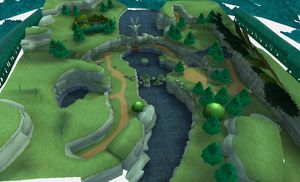 An early map for what appears to be Verdant Court in the Arbor Area. 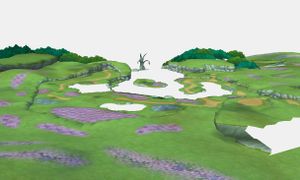 Another early map of what appears to be Verdant Court. 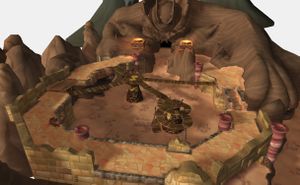 An unpolished version of what's most likely Rockridge Fort in the Crag Area. 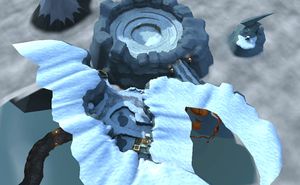 An early version of the Colosseum in the Crag Area. 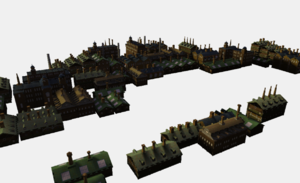 An early map version of the Train Depot in the Tech Area. 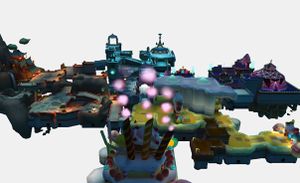 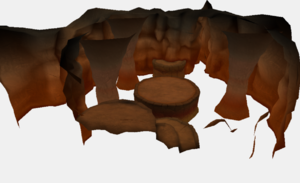 An early map for the cave in the Colosseum (specifically for the version that is used for Rhyperior's Skill Game). 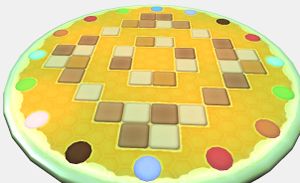 An early version of the fighting arena that you fight Coffagrigus in. 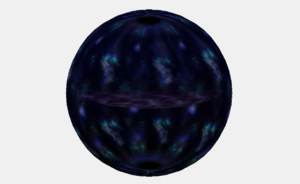 An early version of an unknown map. It somewhat resembles the background of the Darkrai boss fight. 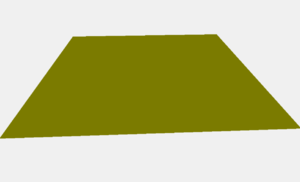 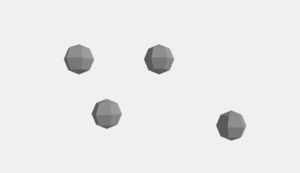 Some strange floating spheres foundin the files for the Flight of Fancy Attraction. They were likely used to test the collision detection that was put on the gems, since they're modeled at a similar size to those.

An unused object found in the Gimmick folder. It has the same set of 4 files as most do in this folder, and its naming scheme suggests that it would be used during the Darkrai boss fight (the Fd6501 in its name is also found in the name of the map where the fight takes place). It's possible that it was a test platform at one point, since it somewhat resembles the one that is used in the final game. Interestingly enough, this object doesn't have any textures of its own. The game colors the object as it's loaded into the game, meaning there is no need for it to store any textures. The game does this for a number of objects and textures, but never for one of this size.

PokéPark 2: Wonders Beyond stores all of its maps in 2 .dac files in the Field folder. The names of the two files in each set are the same, outside of one having "Res" at the end and the other having "Dat" at the end. 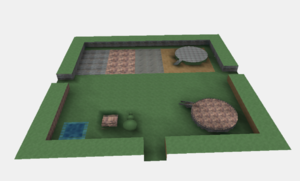 A test map containing some basic objects and textures. There's a few circular platforms, one with a guard rail and one without, and one of these causes the camera to be locked in a weird position. A stationary, uninteractable Mankey is found in the map as well, and while he can be knocked around, he cannot be talked to. 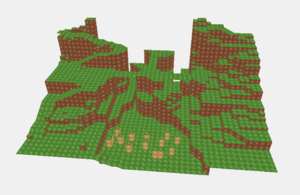 Another test map that was likely used for testing terrain. Like a lot of the unused maps, the textures that make up the surfaces are all simple test textures comprised of 4 squares with either A, B, C, or D in the middle. All of these textures go unused in the final game as well. 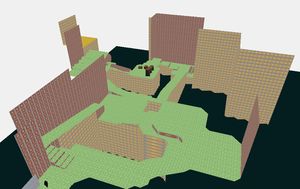 Another test map containing some letters all over the terrain, however there's a little more to it than that. Textures exist for some of the drums found in the first game, PokéPark Wii: Pikachu's Adventure, so it's likely that the Obstacle Hop Skill Game from that game was going to be tested here. 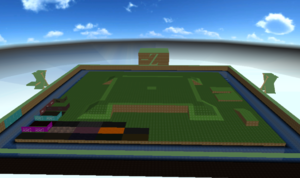 This one is pretty interesting; it's one of only 2 test maps to have a proper working skybox, as the others require one to be loaded in separately. This is by far the map with the most unused textures, with about 30 making up the entirety of the map. Some of these textures have different names on them, possibly suggesting that this was originally created to be an event test of some sort, however the large number of squares might instead suggest that it was originally supposed to be a real map before being turned into a test one. 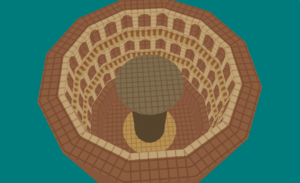 Seems to be an early version of the Tournament map. This one also has a working skybox, and just uses the same texture for it that's found in the previous map. The skybox is strangely big compared to the colosseum-like structure in the middle, especially compared to the other maps in the game... it's currently unknown why this is.

While on the subject of maps, it's important to know that the test stages found in the game’s files almost exclusively use unused textures. They’ve all been organized here by which stage they appear in, with one final section dedicated to the ones that appear multiple times. Many of these textures, like the ones used in the final game, have the option to appear in lower quality at a differing number of levels. The number of levels each one has can be viewed by hovering over the image (for example, if the quality can only be dropped 1 time, then it will be listed with 2 levels).

The skybox model found in the last 2 unused rooms, simply labeled as "sky".

A texture sheet found in the files for Wish Park's main model. While the Wish Palace portal and bridge are both things found in the final game, they're both treated as entirely separate entities, and are actually found in the Gimmick folder with much better textures. Viewing Wish Park's models doesn't even show these textures present where the objects would normally be found; they were likely used as placeholder textures while their separate models were being created. 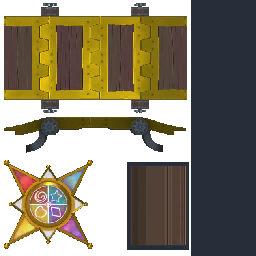 An unused texture found with the Driftblim Stop's textures in GimmickTaxiStopA. At least a part of the texture is used in the first game, PokéPark Wii: Pikachu's Adventure. 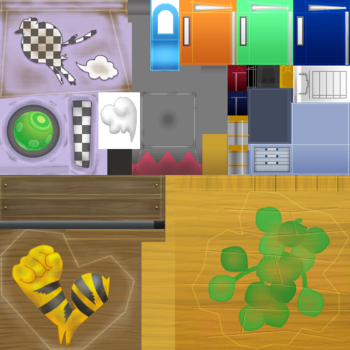 Found in the file AtRuleTex.dac, which is a file in the Archive folder that holds the screenshots used during the Attraction introductory menus. The icons that show the motion control inputs all appear to be unfinished compared to the one used in the final game, appearing much more rudimentary (this is especially visible with the different diamonds). Also, you can tell that it’s from a Japanese version of the game since there’s no comma in the score counter. 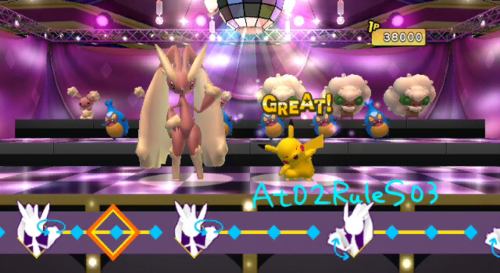 The menus that explain each Attraction have animated Wii remotes to show that kind of motions the player should perform. While these animations are all stored in a separate file, a few exist in the file AtRuleTex.dac, the same one that At02RuleS03 is found unused in. The naming scheme for files relating to the Attractions are always numbered based on which one they're tied to (starting from 0 and going to 3), and these are no exception.

Found in the file MenuAttraction.dac (which is the file that holds different textures & animations used by multiple Attractions), there are 4 different textures that simply consist of their names. Their names are never shown like this, only ever being represented by plain text or accompanying a special background (which already has the text on it).

Some more Japanese text, this one saying "stop". It's found in the file MenuCommon.dac in the Archive folder.

"Pikachu" in Japanese. This is found in the Archive folder under PrepareMessageRes.dac. Based on the name, it's possible that it was used as some sort of placeholder.

An unused texture found exclusively in the Japanese version of the game. It's clearly an early texture used for the title screen, and is found in the folder for it, too. The red text roughly translates too "It is a dummy image". 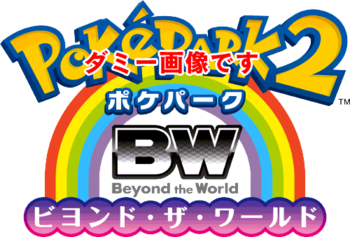 Another unused texture exclusive to the Japanese version, this one is found right below TitleLogoDummy.tpl in the same file. It's current use is unknown, and it originally likely served as one of the block used to make up a menu (the game stores the different menu backgrounds as chunk-like textures, putting them together for the final menu).

PokéPark 2 has a file system that's not exactly the best at saving space. Lots of files are repeated multiple times in the code, especially when it come to the sounds, to the point where there can be 5 or 6 copies of the same sound found in different .awb files.

These two drum riffs appear multiple times in the files, but are most interestingly found with the other music tracks for the skill games. One is just an extended version of the other.

A short motif that's not seen in the final game. Who knows what this could be for?

Another sound file, this one is found in the file "S_Field_BGM_streamfiles.awb". It's 8 seconds of pure silence. No reason for it to exist, really. Fittingly enough, this is one of the few audio files that's not connected to a cutscene that isn't repeated elsewhere in the sound folder.

All of the voice clips in the game are found in the file S_POKE_VOICE_streamfiles.awb. Interestingly, the Japanese version of the game has 1024 voice files, while the English version only has 992. Testing reveals that not all of them are used, however!

The 63rd voice clip in the file, this is a much more shrill version of her normal cry. It's never played once during testing, so it's presumably unused.

The 160th voice clip in the file, this would play when Audino gets angry. However, Audino is one of the few Pokémon that's programmed to never actually get angry, and only runs away once her lowest mood point is reached.

ResdientMessage.dac (which is a file found in the Archive folder) has a file called PlaceName.msbt; this holds data for the splash text that appears when you enter a different area in the PokéPark. Looking at it through a hex editor shows that text exists for the different areas of Wish Park to be named as well at the very end of the file. as well, It's not known exactly why this was cut, but chances are it's due to the fact that there's no loading zone between the 4 main areas of Wish Park.

Each version of the game has a different way of separating the hundreds from the thousands in all of the different counters that appear in the game. The Japanese version has nothing, the English version uses a comma, the Italian version uses a decimal point, and all other versions of the game use a space.

While the flavor text seen in almost every Attraction changes for most languages, the exception lies in the Japanese and English versions (as it normally does in this game). They share mostly the same words, but while they might be the same, they have extra decorations in the Japanese version and were simplified for an unknown reason for the international release.