Pokémon Picross is, as the name suggests, a Pokémon-filled Picross game, using a similar (if not identical) engine as Jupiter's earlier Picross 2. While this game is from 1999, the idea of combining Pokémon and Picross dates back to at least 1997, as a Picross minigame is present (albeit inaccessible) in the version of Pokémon Gold and Silver that was playable at that year's Spaceworld event, using a setup similar to those of prior Game Boy Picross games.

For whatever reason, the game was cancelled despite being finished and having passed through Nintendo's lot check. While the idea was later resurrected and released for the 3DS by the same developer, this first iteration never saw the light of day until September 2020, when the final build was leaked online. An English fan translation is available. 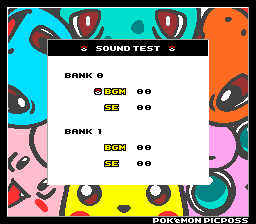 There are several graphics banks left over/modified from Picross 2, including remnants of Mario and Wario's sprites.

Present twice in the ROM, at 1F8010 and 1FC010, is this hidden credit for music composer Toshiyuki Ueno. The exact same string can also be found in Picross 2, which isn't surprising given how this game was used as a base when Pokémon Picross was being made.