From The Cutting Room Floor
Jump to navigation Jump to search
This page contains changes which are not marked for translation.
Other languages:
English • ‎polski • ‎日本語 • ‎한국어

Pokémon Crystal is the updated companion to Pokémon Gold and Silver, with a focus on Suicune and mobile-based online functionality (though the latter is exclusive to Japan). It is also notable for being the first Pokémon game to include a female protagonist. Go Kris!

All the unused data from Gold and Silver remains in the code of Crystal, virtually all of it unchanged aside from a few exceptions, which are documented below:

Data for an unused base cry can be found in the ROM at 0xF35D3. This is a leftover from Pokémon Red and Blue, and just like in those games here it isn't referenced by any pointer table, therefore there is no ID associated with this base cry.

This rearrangement of the Pokémon Center music is used once the player successfully connects to the Mobile System GB service for the first time, and is therefore never heard in the international versions. Its ID is 66.

This theme is used when accessing the Mobile menu, and is therefore never heard in the international versions. Its ID is 5E.

This theme is used on the mobile connection screen, and is therefore never heard in the international versions. Its ID is 5F.

The music from the opening sequences of Gold and Silver remains in the ROM, despite there being no use for it in Crystal:

The unused Opening Demo track from Gold and Silver. Its ID is 52.

The unused Opening Demo 2 track from Gold and Silver. Its ID is 53. 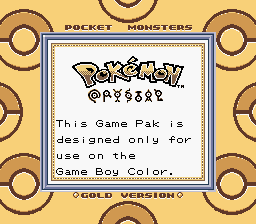 Even though Pokémon Crystal is only compatible with the Game Boy Color, it retains an unused Super Game Boy border programmed into the game. It can be enabled by setting the flag at offset 146 to 03. It is a leftover from the Japanese Gold version in all releases; given that the border does not fit well with Crystal, it was likely that it was never intended to be used at all. To enable the Super Game Boy features on real hardware or on an emulator, use the Game Genie code 031-46F-E6A (Note that because the SGB checks for the bit after booting, you must first power it up with any game that has SGB enhancements inserted into the Game Genie, then insert the Crystal cartridge with the Game Genie to see the hidden features). It is worth noting that music was planned to play on the error message screen that appears as load functions are present.

There are several other unused palettes that are leftovers from Gold and Silver. Game Genie codes ??9-A8B-91B and ?69-A7B-B31 will load any of these unused palettes. ATTR_BLK settings are not actual palettes but rather attribute settings and they appear black, and thus they won't be documented.

In Gold, the default name for the player's rival when a blank name is provided is SILVER (シルバー in Japanese), which remains true in Crystal. Coupled with the fact that the game is programmed to load the Gold border when in SGB mode further suggests that Crystal was developed from Gold rather than Silver.

In contrast, the default name in Silver is GOLD in English and ゴールド in Japanese.

All 26 forms of Unown have Shiny variants, but ironically enough only "I" and "V" are accessible due to how both Forms and shininess are dependent on IV values.

Found at the beginning of bank 43 (address 0x10C000) is this early iteration of the title screen which comes with its own tilemap, tilesets, and even preliminary palette data. Namely, the Pocket Monsters logo is much more dull, and its highlights are inverted for the most part. Part of the logo are actually background tiles, with the rest being an overlay, which is superimposed atop the crystal emblem. As for the crystal, it is also a fair bit more faded, as well as larger in size. Meanwhile, both the version name and "POCKET MONSTERS" text are swapped, and are both written in English, as opposed to only the later. No copyright date is to be found here as well, and neither is the running Suicune, though instead a unique Unown emblem can be spotted in the lower right corner of the screen.

Regardless of visuals, this title screen does function as intended, bringing the player onto the continue screen, with the only quirk being that it does not reboot the game after the music ends, unlike the final title screen. The bytes in the following offsets should be altered in order to disable the regular title screen's animation, loading the unused one instead:

Alternatively, the following Game Genie codes may be used:

The Burned Tower had its design updated in Crystal, which namely removed the holes which dropped down to the basement. However, both upper and lower floors still retain the data which defined where the player would fall/land, with it obviously going completely unused.