From The Cutting Room Floor
< Pokémon Crystal
Jump to navigation Jump to search
This page contains changes which are not marked for translation.

This is a sub-page of Pokémon Crystal.

The following were used in Gold and Silver, but remain in Crystal as unused leftovers:

Moreover, the following Super Game Boy-mode assets also go completely unused, due to Crystal only being compatible with the Game Boy Color:

For some reason, Crystal added a redundant tileset file among the graphics for the Mail backgrounds. The file in question is a copy of the Sentret silhouette used for the Blusky Mail, except cropped as to only include the bottom of the sprite.

These unused tiles are present within the tileset for Suicune's close-up during the intro cutscene. Likely used as visual references for when this screen was still being drawn.

Found among the graphics linked to the Mobile System GB-exclusive content is an early version of the animation used when connecting to the mobile system. Most notably, this tileset looks quite a fair bit rougher, with a more primitive sprite for the GBC and the mobile adapter. The cellphone sprite also wider, shinier, and with a shorter dialing animation. Also included is a smaller cellphone sprite, which appears to fit right in with the early linking animation. Meanwhile, the final game simply reuses the same phone sprite for both linking and dialing. The original cellphone sprite can actually be seen in a prerelease screenshot, revealing that it also once used a red palette, instead of a blue one.

In the Japanese version, when using the Mobile System GB, it is possible to access a special trade animation which depicts your Pokémon "traveling" through the adapter cable and into your cellphone. The color of the adapter actually changes depending on which model used, with three colors/models available:

However, there exist a fourth, unused color, which would have rendered the cable in green. This is likely the color once tied to the NTT DoCoMo/Astel adapter, a model which ultimately went unreleased. It would have also nicely completed the color combo of the originally planned four adapters, with one for each color of the Generation I games.

Not only that, but there are also four additional unused palettes, thought the don't appear to correspond to any know adapter model, released or not. These include purple, black, pink, and a gray one with blue accents. Due to being the last one in the list, the gray palette is seemingly used as the default if a mobile trade is triggered without any adapters actually being plugged in, which can most notably be seen when using the game's debug menu.

New to Crystal are some palettes which are exclusive to certain tilesets, allowing for different colors when compared to the standard interior palette. Of all of these, only the one assigned to the Ice Path contains colors which are never used anywhere.

While Crystal actually made use of a few unused overworld sprites, there is actually one character where the opposite happened. Indeed, the player's mother had her one and only movement script changed, with her now only moving left and right. This rendered her "walk north" and "walk south" animation frames unused.

The leftover pagoda tiles remain here, but unique to Crystal is this rather odd tile, found alongside the newly added Burned Tower graphics. Its right side matches with right-facing ledges, but otherwise it doesn’t really fit anywhere. These tiles do not appear in any block.

The leftover pier tile remains here, but unique to Crystal is what's in the second half of the tileset. Indeed, it turns out that the graphics for the Battle Tower are present, despite it having its own tileset, which sits at ID 04. It's then likely that the devs intended for the exterior of the Battle Tower to share a tileset with Goldenrod City, but ultimately decided against it, perhaps due to it bloating the size of the blockset, due to all the newly needed blocks. Moreover, this chunk of the tileset (aside from the flower shop and PCC tiles) actually lacks a proper palette, instead reusing the first half's data. Only the pier tile appears in a block.

The tileset for the outside of the Battle Tower, as mentioned earlier, contains the entirety of tileset 02, a majority of it going completely unused. Interestingly, this half is assigned the palette data for tileset 01, which causes some tiles to be miscolored. As for the Battle Tower graphics, only one tile goes unused, with it being a bit of window. Only the tall grass and flower tiles appear in a block, here 03 and 04.

In the laboratory tileset, the stair tiles were actually updated, despite still being unused.

The tilset used for the Goldenrod Department Store roof contains three unused tile, with the most notable one being an unused bit of counter.

The leftover tiles remain here, though all the unused blocks they appeared in were overwritten, as to leave space for the mobile trade and colosseum rooms. Besides those, of the newly introduced graphics, only one tile goes unused, with it likely a leftover from an early mobile room design.

The tileset for the Game Corner has an unused duplicate of one of the Prize Corner booth tiles. This is due to it being a leftover of the original Gold and Silver tileset, where the Prize Booth window only used one tile, which was expanded to two in Crystal, with those found in the second half of the tileset. Thus, the devs simply updated this tile, despite it being made redundant.

The boulder tile remains unused, but as of Crystal so do a handful of tiles originally used in Lance's room at the Indigo Plateau. These include the door and floor graphics. As for the newly introduced tiles, the only unused one appears to be some sort of ground decoration.

The tileset for the PokéCom Center, unsurprisingly, is never used in the International version, as the Goldenrod Pokémon Center uses its standard design there. In the tileset itself however, a couple of tiles do get unused, such as some sort of grating, red and blue plants, and an odd floor tile. These tiles do not appear in any block.

The tileset for the Battle Tower contains a handful of unused tiles, such as pieces of counter, some nondescript gray tiles, and a piece of wall. Only the latter tile appears in a block, with it being block ID 1B.

The pagoda tileset was expanded in Crystal, but oddly enough all the tiles that appear there go completely unused. These include a cuttable tree, the Kanto grass and bush tiles, a floorboard, a log, and most shocking of all, the Growlithe statue from the Space World '97 iteration of this tileset. It's more than likely that the devs simply pulled old scratchpads to use as references for when this tileset was being updated, which is supported by the fact that the log sprites aligns not with the final floorboard design, but with the one from the Space World '99 demo. These tiles do not appear in any block.

The small fountain/bird bath was touched-up, and actually gets used here. As such, only the ground tiles and the fence post remain.

The Hall of Fame floor tile was overwritten, but other than that all the other unused tiles remain untouched.

The tileset for the Radio Tower still contains the graphics for the original key card terminal. These tiles remain in the unused in block ID 16.

The leftover tiles remain here, but are now joined by some new ones. Indeed, some of the original rock formation tiles were made redundant when the updated Ice Cave graphics were created, this include the original stair and slippery ice tiles. Once again, only the cave entrance appears in an unused block, with it still ID 13. 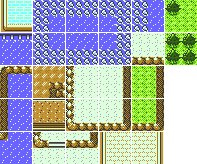