Pokémon Legends: Arceus takes players to the distant past and the Hisui region, the historical equivalent to the present-day Sinnoh. It makes changes to nearly every mechanic or aspect of the Pokémon formula, creating a more open-ended experience than any prior game in the series.

Additionally, you can evolve Pokémon that previously only evolved through trading with a certain item, making it finally possible to complete the Pokédex by yourself! (If you have save files from the last two games, that is.)

All the returning Pokémon in the game have their Abilities programmed in, despite them never coming into play. Moreover, despite Abilities not existing in this game, the new Pokémon were each given new abilities internally, almost certainly for future-proofing compatibility with Pokémon Home.

Interestingly, many of the hidden abilities for these Pokémon were changed in Pokémon Scarlet & Violet.

Every Pokémon that is not featured in the game has allocated slots that are never used. These also include learnsets that are seemingly copied from Pokémon Sword and Shield, though curiously Pokémon that weren't in those games also have learnsets featuring moves from said games.

Any Pokémon in Legends which is labeled as a static encounter or gift in-game is Shiny-locked. The overwhelming majority of these can be found Shiny in previous games, and their Shiny forms can be seen if transferred from said previous games to Legends via Pokémon HOME, but they cannot be both Shiny and native to Hisui.

While these Pokémon are encountered in required boss fights throughout the story, they have functioning Pokémon data and can be added to the party with cheats or hacks. Doing so shows that they have unique statistics that go completely unseen otherwise.

Slots exist for Mega Pokémon, despite being (mostly) stubbed out of Sword and Shield and Brilliant Diamond and Shining Pearl. Why these are included is currently a mystery, but it's possible that the idea of Mega Pokémon could be revisited through DLC. 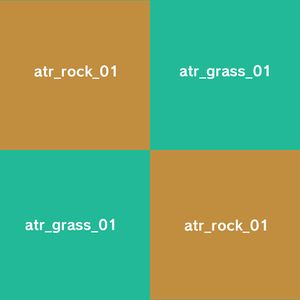 A checkermark with text saying "atr_rock_01" on the brown squares and "atr_grass_01" on the cyan squares. Likely a terrain floor collision test texture.

Likely meant to be the player's room in the present day. Only the floor and walls have collision, suggesting that this may have been part of a deleted cutscene before the player character is sent into the past.

Each Pokémon has an internal ID number seen in various files related to Game Freak-developed Pokémon games for the 3DS and Switch.

Wyrdeer, Kleavor, Sneasler, Enamorus, Overqwil, Basculegion, and Ursaluna occupy IDs 1001-1007. In Sword and Shield, the highest Pokémon ID number is 990, which belongs to Regidrago. IDs 991-1000 are unoccupied, but have the potential to be filled in the future.

Mountain Gale (the signature move of Hisuian Avalugg) is coded to have a chance of flinching the opponent, although flinching is not used in Legends Arceus. It is likely this is a future-proof measure for any future inclusion of the move.

Released February 27, 2022, and introduced the following: