This page details one or more prototype versions of Pokémon Mystery Dungeon: Explorers of Sky. 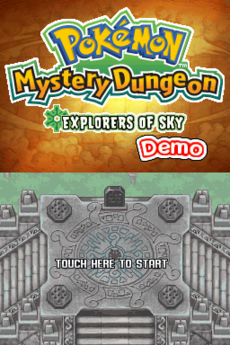 A kiosk demo for Explorers of Sky was dumped online, and it has various differences. The demo is present in the final game, and can be enabled by modifying a "variation" flag in the ROM's script engine.

Title screen is exactly like the final, but the logo was changed to add the word Demo onto it.

The demo has a warning screen about seizures, while the final game doesn't.

The demo has an ESRB screen showing the age rating and content warnings, while the final game doesn't. This time, it shows it in English and French.