This page details prerelease information and/or media for Pokémon X and Y.

Despite being announced 10 months before their expected release, Pokémon X and Y were in development for a total of 3.5 years, before the Nintendo 3DS was even unveiled![1] Even so, the games were still being worked on throughout 2013, made evident by several minor changes made between the builds seen in early footage and screenshots and the final release.

This teaser trailer was first shown in a special Nintendo Direct announcement on January 8th 2013. 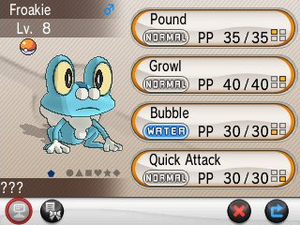 On May 14th 2013, several screenshots were released, several of which depicting an earlier version of the Pokémon menu screen. Differences include:

During the E3 trailer shown at E3 2013, a Gardevoir was shown using the move Fairy Wind. In the final game, neither Gardevoir nor its pre-evolutions can learn this move by any means.

A Shiny Gogoat appears in footage shown during the E3 Developer Roundtable at E3 2013, which differs greatly in coloration from the Shiny Gogoat seen in the final release of the game.

In an early screenshot shown on the official Pokémon X and Y website, Oblivion Wing is shown to be lacking the background change and detailing to the beam seen in the final release.

In a trailer showcasing Mega Mewtwo Y, the Pokémon uses Focus Blast. The background appears red, while in the final game, the background is blue.

Retrieved from "https://tcrf.net/index.php?title=Prerelease:Pokémon_X_and_Y&oldid=822261"
Categories:
Cleanup > To do
Games > Games by content > Prereleases