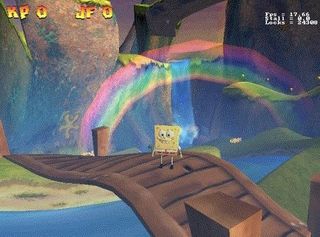 Seen on the right is the earliest known photo of the game, featuring SpongeBob in an early version of Jellyfish Fields.

A trailer that was included in the 2002 SpongeBob Halloween DVD, this seems to be a later build than what the photo above has, though still has a large number of differences.

A strange video that can be found on Video Detective. It seems to be a much later build of the PS2 release (indicated by the brightness of the skybox), but still not complete.

There are two hints videos for this game released. One has been featured on the 2002 DVD SpongeBob SquarePants: Sea Stories, and another on the game itself. Both videos use an earlier version of the game.

Some concept art for the game can be found on Darrin Leblanc's website, including what may be an early design of the Chum World clownfish and a few alternate versions of the Eel enemy.