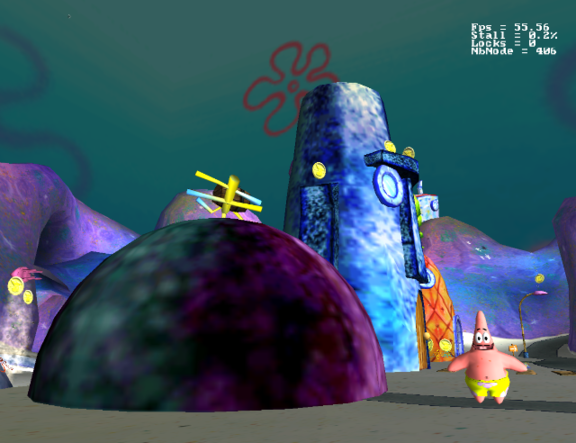 A display with details regarding the game's performance can be enabled by using the following command in SCRIPT.TSC:

Alternately, you can use one of the following codes, which will also render player coordinates:

An animation and sound effect for an unused Whirlpool attack can be found among the assets for the Mermaid Man costume.

In addition, there is an unused line from the French Narrator describing the attack.

Thanks to various evidence, it is known the game was at some point meant to have GBA Link functionality with the GBA version of the game. To make this happen, collaborative efforts were made between the developers of both versions, but difficulties arose at some point relatively late in development, leading to the feature being scrapped.

In a 2019 interview with YouTube channel Who Needs Normal?, Producer Billy Joe Cain gives his thoughts on what led to the feature being dropped:

At the end things started getting all fast, and although our team was small, just trying to make that kind of thing happen was not going to occur. I was really disappointed about it but even then, we tried to get in touch with Vicarious. I'm sure just as much as they tried to get a hold of us. But nobody had time to communicate because they were so busy trying to rush to get their own products out.

Present at the root directory of the GameCube version is a file named radar.bin. This is actually a working GBA ROM which was clearly intended to be used in a more finalized form for the scrapped GBA Link functionality.

The ROM can be manually loaded on a GBA, and a looping test demo will play on the GBA, shown below:

Attempting to connect a GBA with the ROM loaded to the GameCube will result in a simultaneous crash on both systems.

Voice clips describing another version of the Jellyfish Rodeo mini-game present in the GBA version using GBA Link remain in the game's audio files. Certain levels would have a special Jellyfish Rodeo Tent that appears when a GBA is connected and you would enter one to start the mini-game.

Apparently, you would initiate the mini-game (at least in Bikini Bottom) by going into a special tent with a Jellyfish inside.

Audience of Kids
It seems the audience of kids were meant to do more than just express their disgust at the Dutchman's Treasures.

The axdemo folder has the standard GameCube SDK midi files and sound tests. 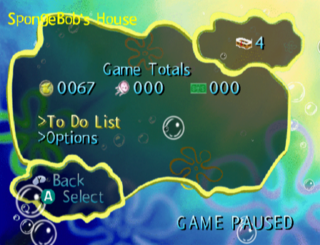 In the GameCube version, press and hold L, R, B, X, use the control stick to select a level and press Z to enter. In the PlayStation 2 version, hold L1, R2, Square, O and press SELECT to enter. The level names will appear in the top left corner. 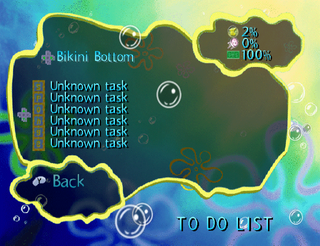