Possibly one of the more popular SpongeBob flash-games, Invasion of the Lava King is a RPG, with no turn-based combat.

Two unused graphics that were meant for a level editor.

An unused game over screen.

A crudely drawn arrow in a circle.

On the title screen there is a button labeled "Level Builder", however the game always makes it invisible. By altering the game's code, you can make the button visible and access the level builder the developers used to make the various maps. The tool functions for the most part, however saving and loading appear to be broken due to it relying on functions from MDM Zinc, which the final game was not compiled in. 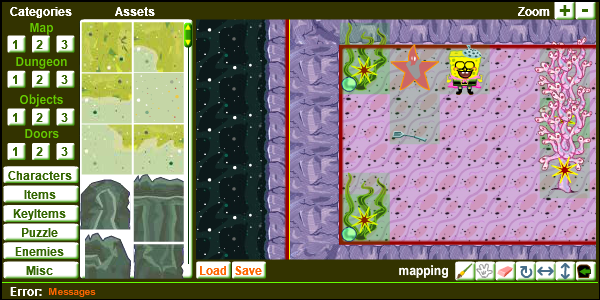 Text found in a preloader referencing a "Focus Keeper," whatever the heck that is.

Placeholder names for the leaderboard, including Bomberman!