Enter the password D3BVG-M0D3 (Debug Mode) and the game will start with a stage select added to the sub-screen, as well as give you all the items in the game. Among these items is the Power Ring, which if equipped will make SpongeBob invincible (he's still knocked back by attacks) and allow him to jump higher.

Alternately, enter -THQ-0NLY- (THQ Only, referring to the publisher) for the stage select or 1T3MS4FR33 (Items For Free) for all items.

Note that increasing and resetting the "stage number" reflects on how far into the game the player is in regards to a specific area, with 1 being the beginning and higher numbers being later in the game. 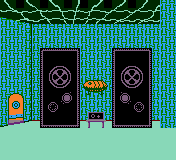 There is an inaccessible room off to the right of the Outer Town map. It can be accessed by using a hex editor and changing the value 04A945 to 00, 01, or 05. From the looks of it, it appears to resemble SpongeBob's living room from the Season 1 episode "Jellyfish Jam".

If one tries to run the game on a Super Game Boy, Game Boy Pocket, the Japan-only Game Boy Light, or the original Game Boy, it will display an error message with an image of SpongeBob with a surprised look on his face from the episode “Hooky”. Additionally, this error screen has the name "SquarePants" miscapitalized as "Squarepants."