Tighty Whitey Tumble was a game where you were to fling SpongeBob by his underwear and see how far he went. The game was released to celebrate SpongeBob's 10th Anniversary. 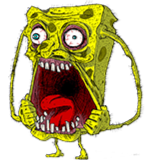 Found in the source files for the game is a rather disturbing image based off the classic internet meme Spengbab. It was likely used as a placeholder before SpongeBob's graphics were finalized.

Several lines of placeholder text for the preloader and main menu which go unseen, as they are hidden or replaced by proper strings in-game.