A SpongeBob browser game that wouldn't have been very noteworthy had it not been for a few rather disturbing unused sprites.

On a sprite sheet for Mrs. Puff (atlas0) in the Krusty Krab, there is a creepy humanoid character on the right with a hyper-realistic mouth, popping eyes, and ears, whose section in the sprite sheet is named "t_tmpYummer". A separate pose of the character's hands are on the atlas2 sheet.

The image itself was created from three sources, the Anatomy Notes page on eye popping, the Wikipedia page on adult teeth, and some generic stock photos of ears; the head seems to have been computer generated.

The original creator of Yummer, a developer from Seven2 has come forward and confirmed Yummer was made around 10 years ago as a modeling test. They kept the model around and it was an inside joke around the office. They used it as a placeholder so it was very recognizable as needing to be replaced in their work. The devs explored what it would be like in the game if a character would peek around a pole behind Mrs. Puff or behind Mr. Krabs (It was undecided at the time, and the character was also undecided). But decided against it in the end. They wanted to highlight as many SpongeBob moments as they could to honor the series. They forgot to remove him from the atlas and the rest is history. His name is Yum (Yum, not Yummer) because yum is the exact opposite of what you would use to describe him.

In one of the sprite sheets for outside of Sandy's Treedome, there is a sprite for a destroyed version of Sandy's suit. It was to be part of a puzzle where SpongeBob would need to wear one of the water helmets, and it acted as a clue.

By modding the game, it is possible to create the Suit object in-game. It uses just the name "suit" in the code. 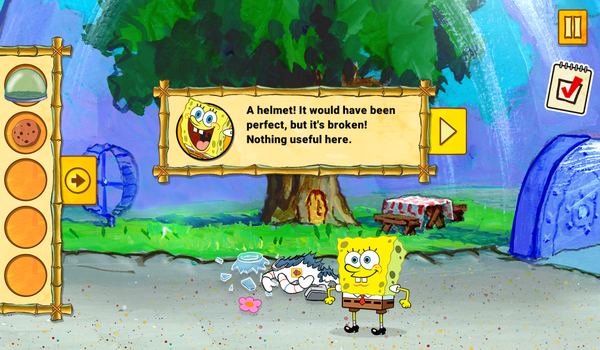 All code for it is complete besides creating it in the scene. It uses the otherwise unused SuitDialogue text. 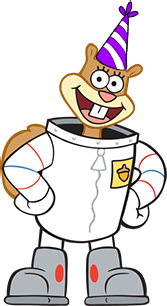 There is a sprite for Sandy at the end of the game without her helmet. The sprite is called "t_partySandy".

There are sprites of SpongeBob's walking pose that are the full design of him in that pose. In-game, walking SpongeBob is made of multiple separate parts. These were probably just used as references.

Used in the destroyed Sandy suit object when summoned into the game.