SpongeBob SquarePants: Battle for Bikini Bottom Rehydrated is a remake of the 2003 console original for newer systems (including PC for the first time as the original PC version was completely different from the older console version) with updated graphics, even more references to both classic and modern moments from the show, and notably, a new multiplayer mode decorated with several cut elements from the original.


Unfortunately, Nickelodeon rushed Purple Lamp to complete it during the summer, most likely in an attempt to have it coincide with The SpongeBob Movie: Sponge on the Run (Which, ironically, ended up getting delayed and having its theatrical release be cancelled due to COVID-19), and that lead to a 7 GB day one update. Despite that, it's still seen as a generally faithful recreation of the cult classic.

A police boat found in Bikini Bottom, likely meant to be seen near the police station. A similar police boat is in the intro cutscene map but unseen by the player.

The geometry of the original game's Bikini Bottom can be found among Sandy's Treedome which, given the filename, was likely left in by accident. It has no textures. 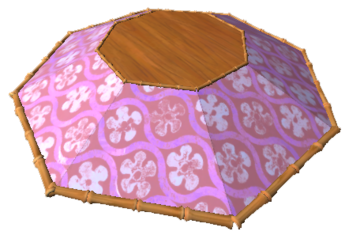 A skate ramp. Based on its appearance and file name, it was most likely intended for the ramp used to get to the SpongeBall Arena in the hub. For some reason, it doesn't show up there after defeating the final boss like it did in the original.

The same unused version of the Patrick's Dream level from the original game still exists in the game's files, but now it's completely textureless. Interestingly, while most of the map uses the same geometry as the original level, some parts of the map are in higher quality, implying this level barely went through the "rehydrating" process before history repeated itself.

A test level that tests all the enemies' behaviors, with each enemy having its own door. At the end of the room is a giant door with Squidward's moose head. Inside the door are all of the game's enemies in a straight line. They appear idle and seemingly can't be interacted with by the player. 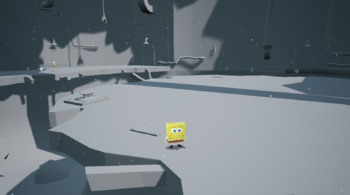 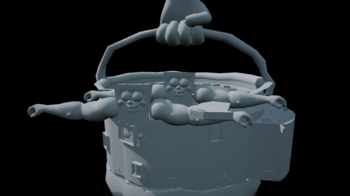 The unused fight against Robo SpongeBob with his Anchor Arms still exists here as well. However, like Patrick's Dream, it's untextured. There is also no fight against him, but above the area, there are 2 duplicates of the Anchor Arms Robo SpongeBob model T-posing. The model seems to be a direct rip from the original since the inside of the head is still modeled. The stones Patrick throw are there as well. There is also Sandy in a T-pose, and Squidward using his normal idle animation.

A file that lists debug files that were present in development builds of the game. This includes a program database for the main executable that would later be removed for the game's release.

The internal codename of the game is "Pineapple", according to the strings in the executable.

In the initial Steam release of the game, launching the game will launch Steam VR alongside it. For whatever reason, the Unreal Engine 4's Oculus plugin is in the game's files. It was eventually removed after an update. The file "OculusVR.ini" is still present, however.

Released on PC only.

Released on PC only.

Released on PC only, more specifically the GOG version.

Released on PC only, more specifically the GOG version.

Released on PS4, Xbox One and PC only.