This is a sub-page of SpongeBob SquarePants: Battle for Bikini Bottom Rehydrated.

Barnacle Boy in the Computer 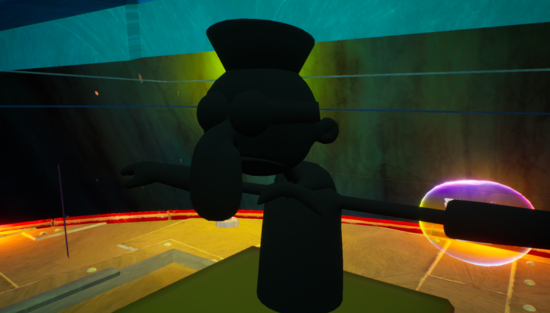 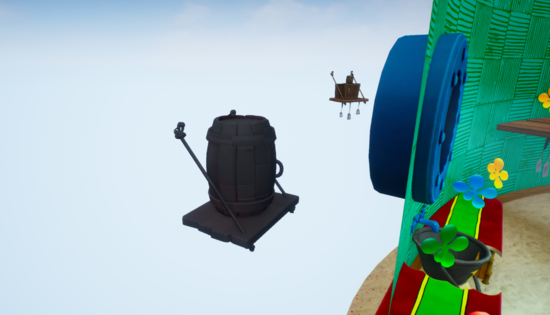 Similarly, the two shelves found outside of SpongeBob's kitchen in the original game are hidden away here as well.

Also outside of SpongeBob's house, there is a strange rectangular prism with a grey default looking texture. This appears to be the same texture the barrel above uses. This was where the TV screen was in the original. 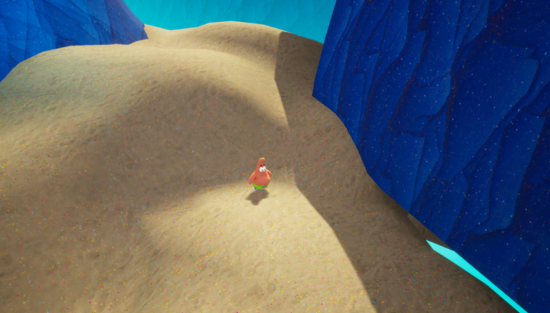 Patrick can be found hidden away out of bounds behind one of the chalets at the top of Sand Mountain. This is the same area where a few tikis were hidden in the original. Patrick here is used for a brief moment during the cutscene after completing Squidward's mission there. This is also the case in the original, except Patrick is invisible at all times. He only becomes visible during the cutscene after completing Squidward's mission.

Sock in the Movie Theater 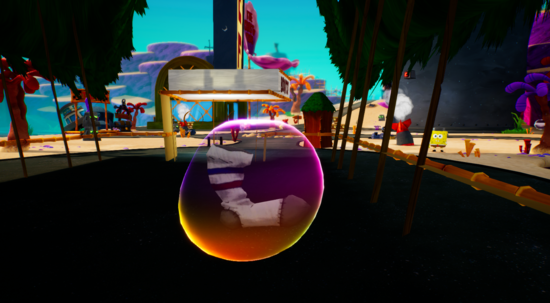 There's a hidden sock inside of the Movie Theater, imported from the original. In the original game, this sock was disabled, not allowing the player to see or collect it. This is separate from the other socks, because when collecting it, the game says the player has 9/8 socks in the area. With the recent patches, it is now impossible to collect this sock.

Plankton in the TV 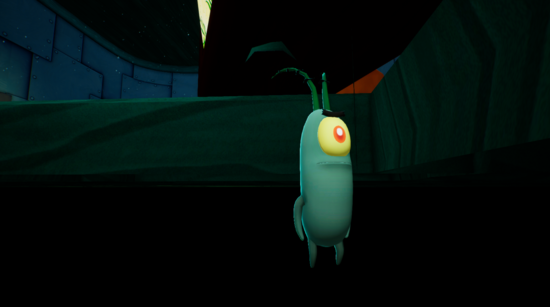 Plankton is hidden under the TV at Shady Shoals. This Plankton is unrelated to the one on the TV, because that one can be seen out of bounds as well. This one, notably, can almost be seen without the use of a debug camera. You can only see his antennae this way though. 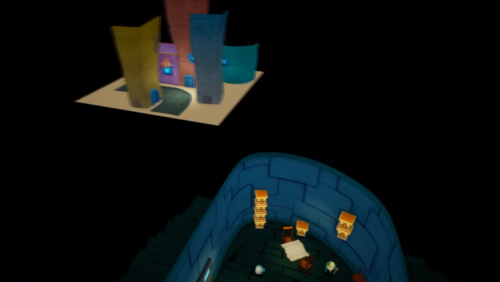 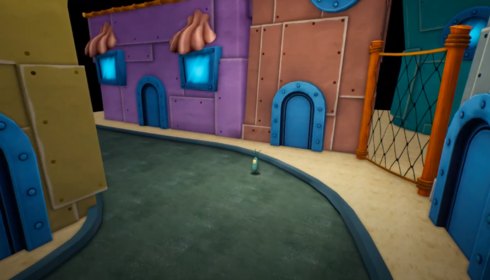 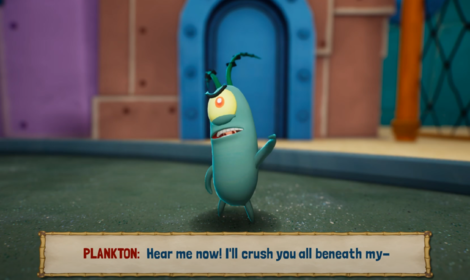 Also, just outside of the Shady Shoals walls, a small downtown Bikini Bottom set can be seen, again with Plankton. This is used for the cutscene when interacting with the TV here. This is also the case in the Chum Bucket. This was in the same location in the original game, except it's invisible at all times, and only becomes visible during the TV cutscene. 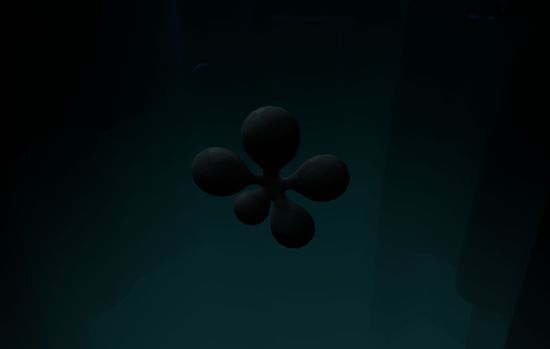 Just like in the original, a hidden shiny object can be found right under Mrs. Puff at the start of Rock Bottom. Unlike the original game however, this one is static, has the default texture seen above and is not interactable. 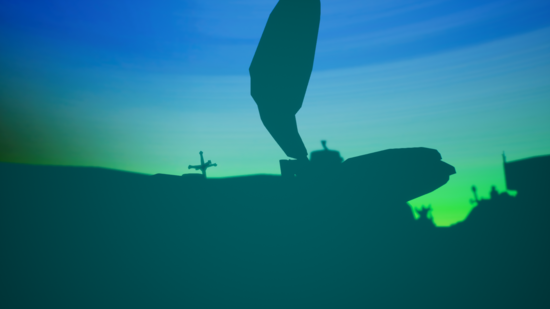 Outside of the Krusty Krab is..."a second Krusty Krab!?". This is most likely a mistake. 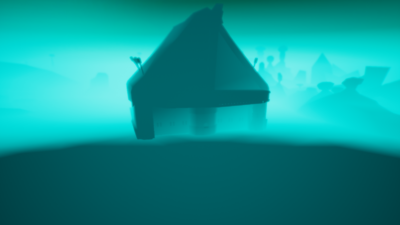 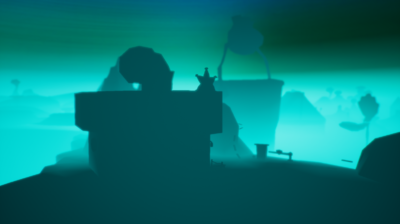 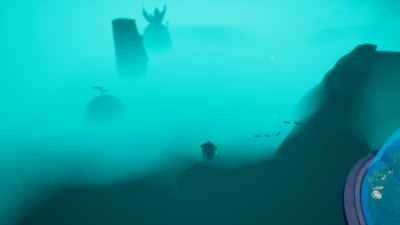 In addition to this, the hubs outside of the Krusty Krab and Sandy's Treedome actually use the model from the original game, but with more "foggy" textures, both for a visual aesthetic and as means to disguise the fact the old model is used. This is most noticeable with the movie theater, the police station, and the coral formations. Oddly though, while inside the Krusty Krab, Sandy's Treedome isn't modeled outside, but SpongeBob's house, Squidward's house, Patrick's house, and Downtown Bikini Bottom are modeled. This is impossible to see normally, and further away from Sandy's Treedome to begin with.

Chum Bucket and Police Station outside of Goo Lagoon 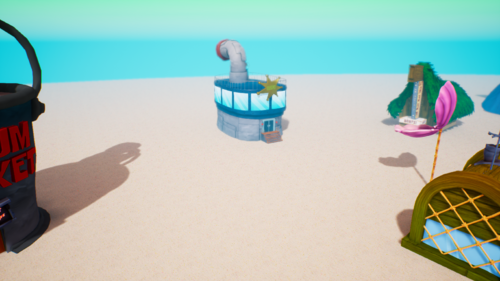 In the out of bounds area at the first section of Goo Lagoon, The positions of the Chum Bucket and the police station are swapped, most likely by mistake. 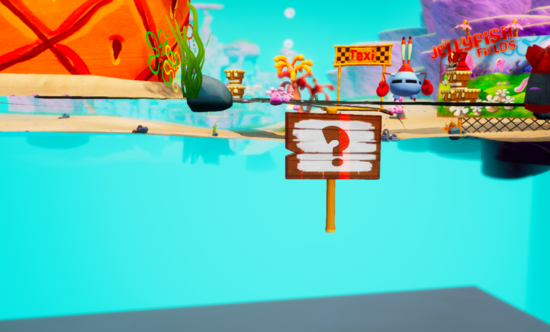 There is a sign in Bikini Bottom under the ground which reads "Reminder: To activate this button, press X." This appears to be the trigger that causes this message to pop up when approaching this area for the first time. 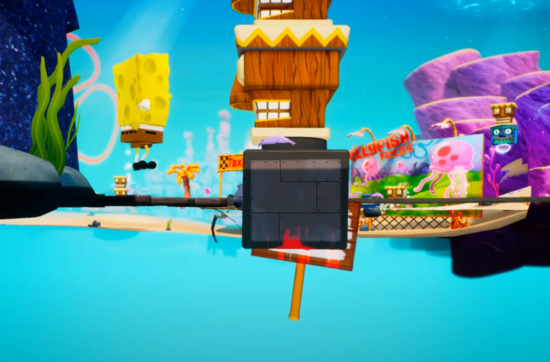 Near the previously mentioned sign, there is another under the tikis and switch that needs to be ground pounded. This too triggers the message instructing the player on how to press this switch. 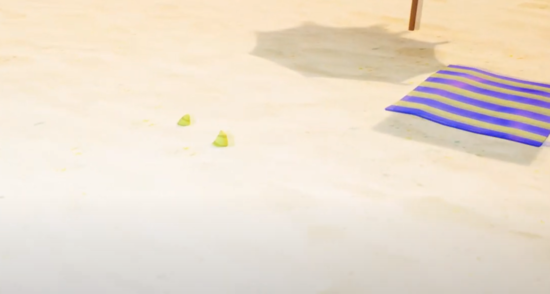 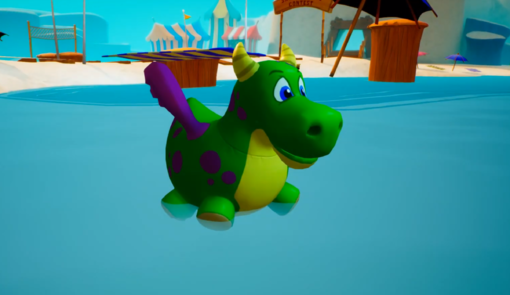 When looking in the distance towards the entrance to Goo Lagoon, two small nubs can be seen in the sand. Upon inspection, these appear to belong to a hidden inflatable dragon found just under the sand. 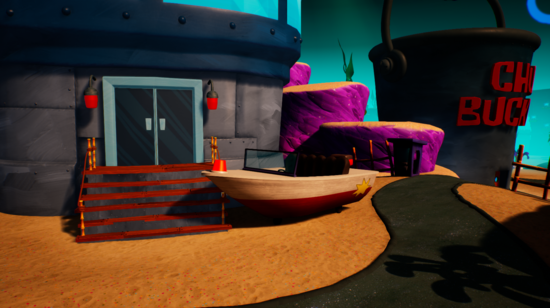 In the intro cutscene map, there's a Police Boat at the Police Station, which is completely unseen as the camera never points towards it. When the Chum Bucket is first shown, the camera almost backs up far enough, but still not enough to see it by normal means. It has slight differences from the unused model however, such as the windshield being stretched down a bit. 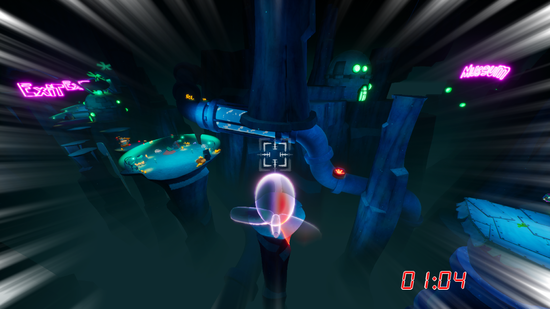 This is found in Rock Bottom after the museum section, oddly in the air. Its use is currently unknown.

Retrieved from "https://tcrf.net/index.php?title=SpongeBob_SquarePants:_Battle_for_Bikini_Bottom_Rehydrated/Out_of_Bounds_Objects&oldid=1113294"
Categories:
Cleanup > To do
Subpages