SpongeBob Moves In! was a city builder by Nickelodeon, using the SpongeBob crew in the form of a freemium game, but can no longer be played as the servers have been shut down.

This picture of a whiteboard can be found inside Data\Raw\Spreadsheets\Working Docs as SBMI_LandMap.jpg. It appears to be a layout of the map. The picture dates back to February 10, 2014, almost a year after the game's release. 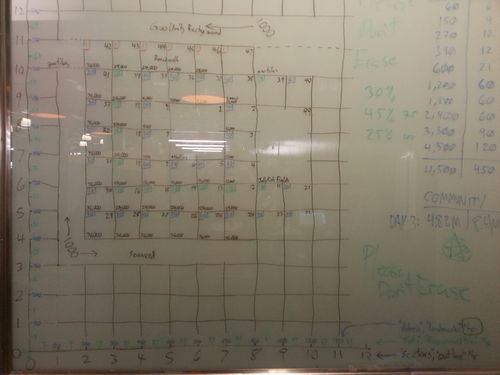 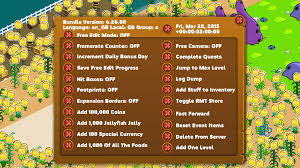 There is a large debug menu in this game, accessible in the settings menu. It offers a lot of options to change gameplay, reset daily reward times and show a FPS counter. This can be turned on by modifying global_settings.json, but this is dependent on what platform you play the game on.

For iOS users, modify the string "show_debug" : false below ios but above googleplay and amazon to "show_debug": true to the enable debug menu on iOS.

For Android users, because there are two different stores to purchase the game from, modify only the section from the store the game was purchased from. Change the string "show_debug" : false to "show_debug": true for either the googleplay or the amazon sections, this is present in the OBB (cache) file (later copied to the game's Android/data).

Restart the game after turning DEBUG on, and text will appear at the bottom of the screen, as well as the settings menu will show the DEBUG button, to indicate DEBUG is enabled. Oddly, Reset Device ID (IOS) in the DEBUG options is also present in the Google Play and Amazon releases. When DEBUG is clicked, a menu with the following options will appear, in the top left corner, it shows the current game version, language, locale and group. These options can be triggered by touching the (X) icon on the right or left of the options. A click SFX will play if you choose an option, or after a while the SFX will play to show the option was activated depending on the task. Characters move then get stuck until you exit the debug menu. The temporary options take effect for the current gameplay, after restarting this is disabled.

Free Edit Mode: Allow you to move and place any objects anywhere, including debris! Can be toggled on or off. The only thing you can't do is store any item into your inventory or sell/delete them.

Save Free Edit Progress: Saves the progress to your device from using Free Edit Mode.

Framerate Counter: Shows a movable display of how much FPS the game is currently running at and also shows the last time and date the game was saved to the server as well as the device memory. If it's green, the game is running at more than 30FPS, red is less than 30FPS, yellow means the FPS is very low. If tasks take long, the FPS counter will freeze until the task is done.

Increment Bonus Day: Increases your current daily reward streak by 1, an internet connection is required to take the reward.

Hit Boxes: Shows hitboxes for objects and characters, will severely slow down performance.

Footprints (TEMPORARY): Shows footprints when characters touch the ground, can slow down performance.

Add 1,000 Of All The Foods: Adds 1,000 of each kind of food to your current balance, even for food currently locked, this takes a while to process, so don't close or you can break your save, listen for a click to know when the task is done!

Reset Device ID (IOS): Resets the device ID for a player on an IOS device, this has no effect on Android platforms.

Date+Time Display: Adds days per 24 touches and 1m of time per touch to the current game time to speed up jobs and actions. Amount of uses of the option write to your save, removing the code in it (carefully) will set time back to normal.

Free Camera: Allows you to move the camera anywhere, zooming out too much may cause your town to be inverted. Can be toggled on or off.

Complete Quests: Completes all current quests, with their rewards, this can take a while to process depending on the performance of the device and the amount of quests there are currently.

Jump To Max Level: Levels up the player to level 35. Subsequent uses just give level up rewards, at low levels, this will get you LOTS of quests, this can also take a while to process depending on the performance of the device and the current player level if it's low.

Log Dump: Dumps a log of the game, a message appears for dumping the log for emailing the developers or personal use. This is dumped in a location depending on what device you are using this on. On Android platforms, it goes to Android/data/com.mtvn.sbmi.(googleplay or amazon)/files/LogDump the file is named LogDump in the folder.

Add Stuff To Inventory: Adds various items to the player's inventory, some items are for higher levelled players, but all can be used at any player level. Some have odd textures and missing text or one of those two. Some are just working items. This takes a while to process.

Toggle RMT Store: Turns off IAP communication with your App Store based off your platform, preventing players to make IAPs where the buttons say locked and clicking them has no action.

Delete From Server: Deletes your profile from the server (if connected) and the device. It also generates a new Player ID (SBMI_XXXXXXXX), so you can start over with a new player ID, this may also cause your save data to be corrupted if this is done quickly or if the internet connection (if you have one) is slow and forces the game to redownload some assets.

Add One Level: Adds one player level to the player, no XP (Happiness) is added and the player is rewarded with the normal level up rewards as well as the level up message, if the player is at level 35, the reward will be given and the player will not level up but the message shows for every subsequent use.