This page details prerelease information and/or media for Streets of Rage (Genesis).

Around 1990, after Capcom released Final Fight on the SNES, Sega found out about the game’s great success. The big blue S then decided to come up with a game similar in genre to Final Fight. After buying a Super Nintendo to examine the game, they decided on a police/detective type story (which will reshape later on). Sega’s conceptualized game’s title was D-SWAT (Dragon-SWAT that is), and development was started.

Sega decided on three fighters who all share similar tae-kwon-do-type abilities. The characters all appear pretty different, considerably, from their final counterparts. The names and descriptions were changed to prevent sexist/racist issues. 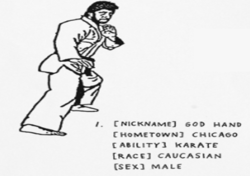 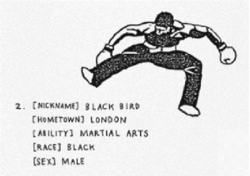 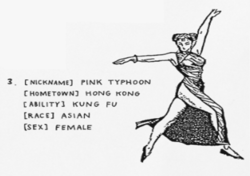 Curiously, Pink Typhoon's design appears to be recycled from 1989's The Revenge of Shinobi. In that game, the "Chinatown" stage featured a woman matching Pink's appearance which would use kicks to attack the player.

The storyline was shortened and made more simplistic in the final, but was long and in-depth prior.

At this point, the work on the actual game started. The basis of gameplay has been put together, and the most differences we will see are mainly going to be in the graphics. As you will see in some early screenshots, the scores' last two digits will be something besides 0’s. Nothing gives you points in the tens and ones in the final, so this is a unique feature.

Adam’s early name was Wolf, Axel’s was Hawk, and Blaze’s was already finalized. They lacked last names and their ages were placed on the same line. There was once a rumor that Adam and Axel had these names in development, but this shot holds the rumor true.

When looking closely, you can see that Adam and Blaze have different expressions on their faces. Also, towards the bottom, “SEGA” and “1991” are switched. There is no “TM” by the logo, either.

Like in the profiles in the intro, Adam and Axel’s names were originally Wolf and Hawk.

Changes to the design of a couple of stores were made, too. "RACH'S SHOP" appears to have had mistakes in its design, because if you look closely, the "RA" looks to have something right in front of it that doesn't line up with "SHOP". The part of the stage in the early shot was changed for the final, so it was matched in the final shot as closely as possible.

What's really interesting here is the "Pine Pot" store in the background was originally called "Time Out", while using the same style of font. A fire hydrant was removed, and a road sign was added in. Plus, the early build was once meant to have another enemy type (maybe a different boss because of the location in the level). It was a fat guy that wears a hockey mask, long socks, and shorts. Nowhere in the final game would this man appear.

The garage has no door in the early build and the wall to the left had five copied strips of its design. A fire hydrant would be removed from the final. Also notice the original "uncensored" Nora (gray was added to her thighs in the final), which remained uncensored until very close to release.

The boss of this stage was originally Abadede (the third stage’s boss in the final), before Antonio replaced him. He was designed to wield an ax, removed in the final.

While the boss in stage 2 is still Souther, the wall was designed pretty differently. The bricks weren't vandalized as much, there were five posters, the graffiti was moved around, and no windows were present. Note that the timer is at 75; the highest the timer starts at in the final is 60 on any difficulty in any stage, explained below. The boss' health meter isn't shown at the top. The large numerals appear to have their final design, suggesting this is a slightly later build. In addition, Player 1's score appears to function, which will also be explained below. The latter two features may also apply to other screenshots.

This video shows several differences (although not huge) in the appearance and programming of stages 1 and 2:

Most of the larger numerals for the timer, lives, etc. are designed differently.

The only stage appearance difference between the early and the final here is the fence being brown instead of gray. However, there are a couple differences with the enemies. The Hakuyos were given a brown coloration, and the Galsias had early designs for their heads. While their boots and legs were pretty much the same, their hair was bouffant-style.

Antonio was originally the boss of the third stage, and Abadede was originally the boss of the first stage, meaning they switched places in the final game. Again, there is no boss health indicator. Also worth mentioning is Player 1 having three special attack uses in reserve. It isn't possible to have more than two at any point without hacking, unless this was changed for testing.

Stage 4 went through a couple noticeable changes. The earlier build’s bridge was designed to be less complete (as was the game itself, ironically) with a more cracked and crumbly ground. The metal bars were silver before being changed to red later on. Enemies with bouffants appear in the earlier build, but it’s unknown if the caped enemies appeared in this build too. The caped ones do appear in the later build, but not in the final game.

For this boss area, the back wall has a large opening in the middle that was filled in and given red lines at the ends.

This part of Stage 5 appears to be the same, minus differences mentioned before.

Metal columns were placed in the background before being removed. The red-and-white decal at the top used triangles in its design before changing to stripes.

The most notable difference at the end of this stage is the door leading to Stage 8 is missing, likely an oversight screenshotted by mistake. The Hakuyos in this shot appear to be wearing blue and red, colors that are absent in the final version. Not only that, the Galsias wearing red have red hair, which would be changed to white.

For some reason, the HUD shows the exact same information as the early stage 5 screenshot.

In the final game, there are no four-pane windows in the background; only two-pane ones are used.

A few other screenshots show some stages that don't appear at any point in the final, but may have been replaced.

A cut stage set in a dark alley was showcased in some early screenshots, before being removed entirely from the game. 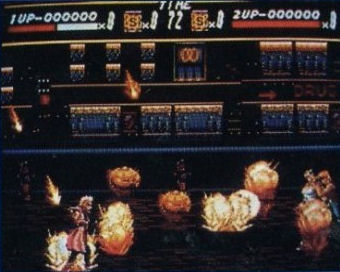 Another cut stage set in what appears to be a dock was also previewed before being removed.