Sega's take on Final Fight (before they got an actual version on the Sega CD), featuring a rocking soundtrack by Yuzo Koshiro. Until Streets of Rage 4 (via the unlockable "retro" characters and Estel), this was the only one in the series where players could call a police back up and shoot a rocket launcher at the bad guys. It's called Bare Knuckle in Japan, which is weird because the main characters clearly are not fighting with bare knuckles.

All three characters on the title screen are fully sprited, but obscured by overlapping. Adam and Blaze are rendered on the same background layer, so not even disabling layers will show the full sprites. Adam's sprite is also lowered off-screen by 4 pixels, presumably so he doesn't cut into the title logo.

Souther has three palettes, but the second one is unused. It makes his hair red, his shirt green, and his overalls yellow. This can be seen by adding the Game Genie code PMBT-DK6A and battling Souther at the end of Round 2. Most likely it was supposed to be used for his double reappearance in Round 6, where the default colors are used instead. 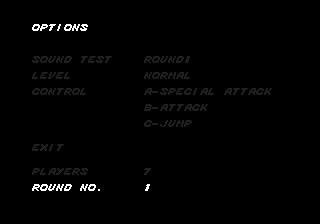 At the title screen, hold A + B + C + Right on the second controller and select Options to add settings for lives and a level select. The 3DS port has these options enabled by default. 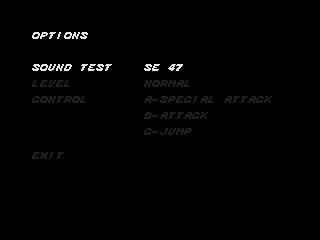 The Options screen's sound test has an unused "SE 47" table entry, which doesn't play anything. Normally the game would loop around from "SE 46" to "ROUND1", meaning this cannot be seen without some memory modifications.

There is an unused, higher-pitched version of Adam's voice clip. This can be heard by enabling the Game Genie code: 4EKA-BDE4 and selecting "VOICE1" in the sound test. Whilst it is a separate sample from the "VOICE1" sample used in game, it consists of the same audio data but is played at a higher sampling rate.

A simple logo change. As stated earlier, the game is called Bare Knuckle in Japan and Streets of Rage internationally.

A couple of voice samples were altered for some reason for the re-release on the 6-Pak cartridge. The version on the Sega Classics 5-in-1 compilation for the SEGA CD (alongside the other games that also have voice samples in it) had all of the voice samples replaced with "high-quality" ones to take advantage of CD capabilities.