This page details one or more prototype versions of Streets of Rage 2 (Genesis).

This very early prototype of the Genesis Bare Knuckle II (aka Streets of Rage 2) contains rough versions of the four playable characters and the first stage. 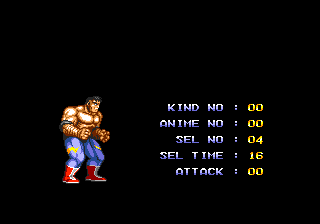 As mentioned above, selecting Options on the main menu will take you to this screen. Every existing character except Barbon is selectable here.

The numbers on the right side are as follows:

If you keep scrolling to the right past Jack, things kind of glitch up. The game will not crash, you can still control things like normal, and you can just scroll back left, but the indicators will not be on-screen anymore. Exiting and reentering this menu will restore things to normal.