After 26 years, Streets of Rage 4 heralds the return of the franchise, now developed by French studios Dotemu, Lizardcube, and the Canadian studio Guard Crush Games. Series mainstays Axel Stone and Blaze Fielding team up with newcomers Cherry Hunter and Floyd Iraia to clean up the streets (once again), this time from Mr. X's white-haired children, The Y Twins. Also, Adam Hunter is finally back and playable again, sporting some sweet sunglasses to boot.

Placed inside the "fx" folder of the Margaret enemy (the ones that throw vials at you) is this "smokebomb" named animation. Probably intended for a scrapped variant of these enemies.

This is an odd one. Inside the folder of the destroyable objects of the game, there is this named "bonustv" sprite from Sonic Mania! Likely intended for an easter egg or a secret stage based on a classic Sonic game, probably to commemorate the 30th anniversary of the franchise. In a past Livestream interview with Jordi Asensio, a designer for Streets of Rage 4, he talked about how difficult was trying to include Joe Musashi, of The Revenge of Shinobi fame as a playable guest character, due to how SEGA operates and handles licensing rights. The developers very likely ran into similar issues again and dropped the whole collaboration idea.

Some broken pieces from the vase object that can be found on the Chinatown stage. Perhaps intended to be used just as stage decoration or after the player breaks one of them. 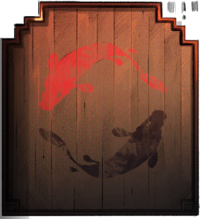 A piece of wood decoration for the Chinatown stage, meant for one of the rooms of the dojo. Discarded in favor of some fancier graphics. You can see this piece of decor in one of the images in the game's gallery. Curiously, there's also some pencil testing on the top right of the image.

Related to a scrapped sequence in-game where the player's character breaks the wall the connects to the next stage, instead, this happens on a short cutscene that looks very different. 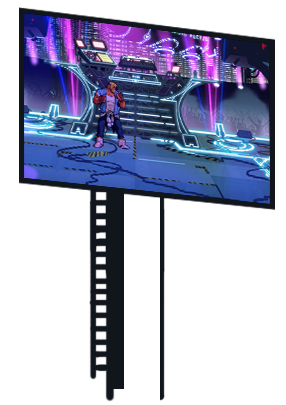 A big screen meant to appear in the background of DJ K-Washi's arena. The game screenshot is a placeholder that serves as an example, and it suggests that it would reproduce what would be happening in the game while you fight the boss. The placeholder screenshot also shows an earlier design for the stage. It's hard to tell in which part of the background where this would fit.

Two very simple graphics, which are likely leftovers from the engine and tools used during the development, and/or from testing the floor properties. Found on the Stage 2 graphic folders, oddly.

Thanks for Playing Screen 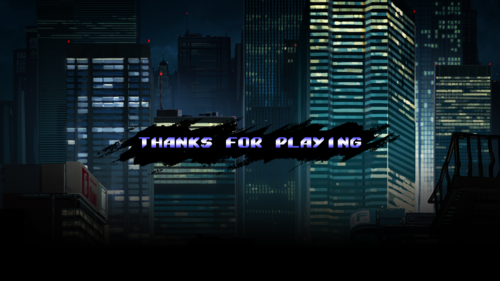 Leftover end screen that was used extensively during the demo presentations in gaming events (like the Pax 2018, which the filename indicates). It's located in the "menus" graphic folder. 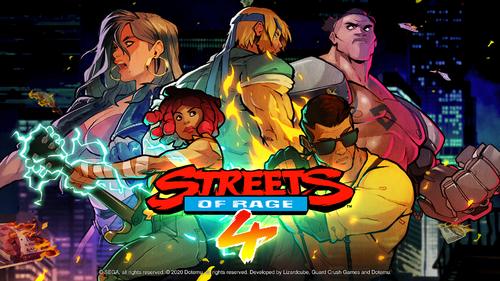 Likely a mockup of the title screen and/or a placeholder used during development. It may have been intended to be used in the Gallery, but even there it goes unused.

In the game files, there are folders with a full set of graphics with unique colors for these five enemies (respectively: Diamond, Donovan, Signal, Galsia, and Dylan), named "base". As the name implies, very probably it was used as the base for making new color variants for the enemies and wasn't really intended to be ever used as actual variants.

Several Galsia images with a red circle and a blue arrow can be found inside the "sprdummy" folder, along with a placeholder for the pipe weapon. Likely used as references to test out the engine physics, different types of damage, or even the hitboxes during development.

Despite being only partially visible, Victy/Roo was fully drawn in the style of the game. Don't ask why.

A part of the elevator below DJ K-Washi's arena that leads to the airport take-off is actually visible in the game files. The transition just happens in a cutscene and not during the gameplay, but apparently, that wasn't always the case.

Placed in the internal playable character folders is a complete rip of the Streets of Rage 2 version of Shiva (sprsor2shiva). While this version of Shiva is encountered as a hidden boss fight, only the third and fourth installment versions are selectable. Weirdly enough, in a short video posted by Dotemu you can see this version being used like a playable character (sorta). 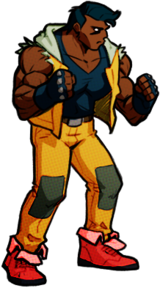 A very weird and completely unused Galsia that uses the same sprites of the B.T variant was left unused into the game. Its most notable difference is a headbutt grab move that is exclusive to him (the animation just re-uses the hurt sprites in a clever way). It's likely that this version of Galsia was used a lot during development as a placeholder boss since it has a lot of traits that are more commonly seen in the boss characters, like the abundant super-armor frames on wake-up and its large health bar. 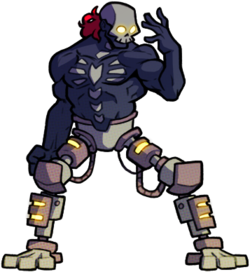 An unfinished version of the Koobo enemy named CHR_Koobig. While its behavior is very similar to the used Koobo, it's very glitchy and doesn't work as intended. It has missing hitboxes on the stomp move, most of the sound effects and voices are absent, and it isn't considered a "heavyweight" enemy (like Big Ben). Interestingly, the "Koobig" name might imply that this version was once planned to be an oversized variant of this enemy that unfortunately didn't go far into development. 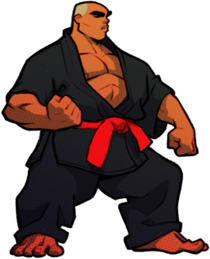 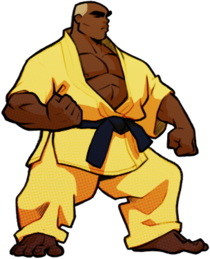 Two variants of the Goro enemy, respectively named Tatsu and Tora (karate2 and karate_tiger in the game files), go unused in the main game. They both more-or-less act in a similar to the used Dokuja variant. While Tora is mostly a faster version of Dokuja, Tatsu attacks the player from both sides with a flurry of punches, before finishing with the strong one. Tora's color scheme seems to be a reference to Jim Kelly's role in the classic action movie, "Enter the Dragon". Both variants ended up being used in "Mr. X Nightmare" DLC's Survival Mode with no changes. 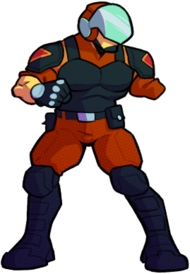 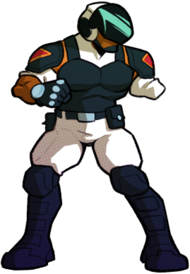 Two alternative versions of the Ralphy and Dunphy enemies, which behavior are more focused on dealing powered-up attacks with the shield, that are strong enough to make the player bounce off the walls. Each of them has slight differences from each other but they act mostly in the same way. Both are compatible with weapons and work normally if you force them to spawn with any valid ones. While Dunphy was already used in the main game with another behavior, Ralphy was completely unused until it ended up being used in the "Mr. X Nightmare" DLC's Survival Mode. However, it just acts like (if not identically to) the default variant (Murphy) and wields a Halberd weapon when spawned.

Shown in some early gameplay footage, Blaze's Air Special was originally a powered singular dive kick before being replaced with an upwards, repeatable kick, presumably for greater combo potential.

A completely unused blitz attack for SoR1 Blaze can be activated back into the game with the use of external programs (such as Cheat Engine). Despite the fact that blitz attacks did not exist in Streets of Rage 1, she has one in her list of "actions", which is locked by not having a properly assigned input. If a input is assigned to it, works perfectly without any issues. The true reason for it to be scrapped is currently unknown but it was likely meant to be unlocked by playing the Survival Mode (like the rest of the alternative moves).

Weirdly, despite looking like a blitz attack, it's registered in the game as an air special but works without having to jump at all... Also makes use of the unused SoR3 vault sprite for it. With the exception of Roo, none of the SoR3 characters have an air special attack, just like in Streets of Rage 3. Likely another scrapped move meant to be unlocked in Survival Mode.

This music was used in the first gameplay trailer uploaded March, 26 2019 by Dotemu. Olivier Derivière shared it in 2022 on his twitter. According to him, this theme was just a temporary track for development purposes and was never intended to be part of the game.

A completely unused track (named 846343275.wem in the PC game files) that was used in the demo presented at the Pax West 2019, for Stage 1, after the car crash. It's a rather weird piece of music, that prominently features a reversed sample of a dude singing in Portuguese. It wasn't present in the game files on the release but was added to the game files after the Mr.X Nightmare DLC update. It ended up being repurposed for the Level Select/Loading Screen for Stage 1, where it sounds a lot more muffled and the "lyrics" were removed, giving place to louder city ambiance sounds. The composer is Olivier Derivière. On Twitter, he confirmed that it was always meant to be a placeholder, while the dev team was waiting for Yuzo Koshiro's music.

When asked about this version on his Twitter, Yuzo Koshiro said: "That's a demo version that once I sent to Dotemu to check if it's ok. All the instruments in it are plugins at the point. If they love it, I record live instruments and replace them. I didn't know it was hidden."

Named as 103994451.wem in the game files (stage5-3_BOSS_SOR2-v2-01 on the Switch). Judging by the Switch name, it was probably an early alternative boss theme meant for Barbon, since he is the main boss for the stage and is originally from Streets of Rage 2 as well. The composer is currently unknown.

A slightly different version of Barbon's Boss theme, under the name "103994451.wem" in Steam version. According to Motohiro Kawashima on his Twitter, he stated that it's the music "in the state before mastering" .

In the game files, some enemies are referred to by early, or placeholder names.

The Japanese physical version of the game came with a big poster ala Bare Knuckle III: its backside compiles all the move sets of the 4 initially available characters. The names of the blitz and special moves are also available in-game in the Extra section. The move names in-game in the different languages are all direct translations of the English names. But the big poster does give different names for some moves of Cherry and Floyd.

Changing the game's language to the Asian ones also changes its logo to "Bare Knuckle IV" on the menu, story mode intro, credits, and changes Skate's name back to Sammy. in a similar way to the previous entries in which the game name changes to "Bare Knuckle" when playing the Japanese versions. The cinematic intro, however, stays with the "Streets of Rage 4" logo regardless of the language chosen.

(Almost) All versions of the game got a day one patch to fix various issues, however, the Xbox One version remained in 1.0/launch Version for some weeks.

Here is a list of the main differences of that build: