Streets of Rage 3 is the third game in the Streets of Rage series. It greatly expands upon the previous sequel, introducing many new play mechanics like running attacks, special moves with weapon and even a charge gauge that allows players to perform special attacks without penalty. However, the game was met with mixed reception, mostly because of its darker tone, experimental soundtrack, and the higher difficulty in the overseas versions that led to the game being considered too hard for the wrong reasons.

The amount of unused content indicates that the game as a whole may have been rushed.

Two unused motorbike stages exist in the game: one where you ride in the wasteland to get to Mr. X's base while avoiding a biker and his petrol bombs, and the second where you are on a bridge trying to get to the White House/city hall while trying to avoid Donovan and co. Surprisingly enough, both of these levels take you to where you're meant to go, depending upon whether you let the general/chief die or not, suggesting that these came after the battle with Jet.

However, in Streets of Rage 3 the unused levels are completely unplayable. The pointers for the graphics and palettes are corrupted, and the Wastelands ends almost immediately while the Bridge crashes the game when it ends. There's no slowdown problem in Streets of Rage 3, but if you make the characters visible, the reason for this soon becomes apparent: The riding graphics are no longer being used. Instead, the normal graphics are being used, which looks very strange.

It is possible to restore the graphics by copying the relevant data from a Bare Knuckle III savestate. However, on closer inspection it appears that large parts of the data for the levels, such as the graphics and palettes, were deleted entirely during the conversion with other game data moved to fill the space (for example, the position where the palette for the Bridge level should be is filled with code that appears after the palette in the Japanese ROM). This certainly explains the graphics corruption, and also means that editing the ROM to play the levels correctly (like in Bare Knuckle III) would be quite complex.

The bugs where the Bridge crashes at the end of the level and the Wastelands ends as soon as it begins also appear to be due to this overwriting of data. If the graphics and other data are copied from a Bare Knuckle III savestate into a Streets of Rage 3 savestate, these bugs no longer occur.

Round 6 is one of the most innovative stages in the game as, instead of moving from left to right beating up punks as in standard stages, you must move around the various floors and rooms of the Syndicate building to release General Ivan Petrov/the Chief of Police in time. As it turns out, there's more to Round 6 than you'd think!

The motorbike-riding sprites for Axel, Blaze, Sammy/Skate, and Zan are also in the ROM, except the pointers for loading the graphics were altered and the data in the levels wasn't updated, resulting in the game trying to load graphics no longer in that spot of the ROM, causing slowdown.

These unused sprites, located in offsets 00095000, 00095400, 00095A00, appear to show an unused defensive throw move. Even in the American version ROM, Blaze's clothes are red in these three sprites. The first of these three sprites is very similar to one of the static jump attack sprites, but there are some differences.

A couple of sprite frames seeming to relate to the same animation in the ROM. What these would have been used for is unknown.

Unused vault frame (likely a mistake, as his vault animation should start with this frame). Found at A9F00

Shiva's basic punch animation based on Streets of Rage 2 lies unused in the ROM. Neither the player or AI enemy version use it (skipping to the palm strike portion of the combo instead) in this game, but Streets of Rage 4 does use these correctly for SOR3 Shiva.

Zan actually went through a huge change during production, which can be seen in some pre-release shots and in motion on the Sega Video Magazine #January 1994. The following five frames are found in the Japanese ROM, uncompressed:

Still, for some reason, the second sprite from the left is actually used in the final. Frames of this earlier version of Zan are significantly different from what's usually shown. The early Zan is more muscular, anime-like, and has sprite shading similar to the style in Streets of Rage 2. His feet look more like boots, whereas the final Zan's look more like loafers.

The aforementioned used frame can be seen if the player does a frontal hold attack while holding forward. It's the move that knocks down the opponent. However, if the player pays close attention, it's clear that this frame looks out of place compared to the others in terms of design. His other early frames that go unused have more in common.

The first frame from the left is most likely the first frame of Zan's dashing animation, indicated by the little lines next to his feet. The third, fourth, and fifth frames appear to be part of the same animation, although it may not be a complete one. It may be a jumping attack of some sort of an air throw, which would suggest that he is the replacement for Max.

Despite the game using the early design version of the attack, a proper, new-design sprite exists. Found at D5480. This oversight was fixed for his Streets of Rage 4 appearance.

The final Zan also has an unused animation, which would have replaced the early Zan frame. It isn't used due to an oversight, but this animation can be seen with Game Genie code CJLB-ENCL. Interestingly, these sprites would finally see official use in the Streets of Rage 4 Mr. X Nightmare DLC as Zan's alternate offensive special, Guillotine.

An unused crouch frame for Electra exists, and was even redrawn in her censored form for Streets of Rage 3.

Frames based on Storm's cheering from Streets of Rage 2 can be found, but go unused as Storm's on-foot sprites were completely removed.

An unused frame for Tiger, with a stance/fist strongly resembling Hakuyo from Streets of Rage 2.

Bare Knuckle III actually has an animation for the title screen that isn't shown due to the fact that the game cycles quickly into the demos. It can be viewed with Pro Action Replay code FFF6B0:0001.

Track ID 35 in the sound test appears to be an early version of "Deep Hole" from Beyond Oasis. The tune is unofficially known as "Early Beyond Oasis Tune", and is titled "BGM IV" on the official soundtrack. Its original purpose is unknown.

"Kama de Coco" (26) is unused in the American and European versions due to Ash being cut.

A number of unused sound effects and voices can be found in the Bare Knuckle III ROM, none of which appear in the in-game sound test. Interestingly, one of them is an unused version of Axel's famous "Ground Upper!" sound. 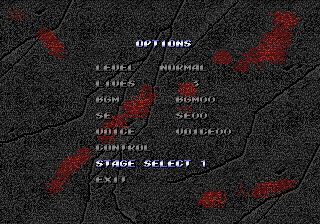 In the main menu, highlight Battle, hold Up + B (now highlighting Options) and press Start to add a level select to the options menu. However, only up to level 6 can be selected. Game Genie code CC2T-JAC2 will allow levels 7A and 7B to be selected. 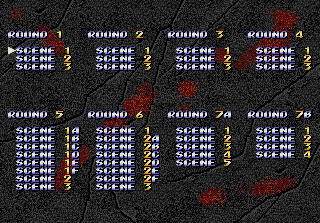 Another more comprehensive stage select is hidden, and can be accessed by PAR code FFFB01:0010. Unlike the options stage select, this allows you to select exact scenes, including the two missing bike scenes. Works in both Bare Knuckle III and Streets of Rage 3.