From The Cutting Room Floor
< Proto:Beyond Oasis
Jump to navigation Jump to search

This is a sub-page of Proto:Beyond Oasis. 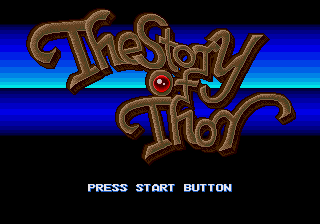 This prototype of The Story of Thor (Beyond Oasis in America) feels more like an engine test than anything else. While the date in the header is July 1994, it was actually released by scene group PROGRESS on April 30th, 1994. The final version was released in December in Japan.

At this point, the player begins with six different weapons, each more functionless than the last. They can be equipped, but don't do anything or have associated sprites yet.

Each weapon besides the ALTKNIFE has a basic placeholder name: SWORD+1, SPEAR+2, BOW+3, etc. Six weapons aren't part of the starting inventory. Set 0BEE or 0BF0 to the appropriate item ID to put one of the unused weapons in one of the two unused slots.

While the swords in the prototype are merely palette swaps of the base sword, each sword has a unique hilt and blade in the final version. The shine around SWORD+4 isn't present in the final.


The BOW+2 was changed from a palette swap of BOW+1 to a yellow bow with a unique handle and arrow tips.


All four of these spear weapons were thrown out and replaced with bomb-based weapons: three throwing bombs and one explosive crossbow. Pretty good trade.

Keys and elemental gems are in the prototype...sorta. They can be placed in the player's inventory, but they don't function at all. The silver key in the prototype was replaced with an HP UP heart in the final.

Here are their names and item IDs. Even at this stage of the prototype the keys were changed from what they were supposed to be; check out the item names and compare them to the actual key graphics.

The map screen hasn't been implemented yet, and an area select (the same one that can be found in the final through a code) appears in its place.

Map Page 31 lists a number of test maps. Besides TES6 DRAGON, which loads the dragon boss' head into VRAM, all of these maps simply lead to a black screen and freeze the game.

The view from the top of the MOUNTAIN2 map changed from being the highest point in the mountain range to somewhere in the middle.

A nearly complete set of graphics for a Barbarian enemy that doesn't appear in the prototype or final versions of the game. All he's missing are hurt and death animations.
These sprites don't match the more detailed style of the other enemy graphics. They must have been drawn very early in development.

The second idea for a sword-wielding enemy was this knight with shield, drawn in the same style as the other monsters in the game.
He too is missing hurt and death animations, and ultimately, the only enemies in the final game who have swords are simple soldiers.

An alternate version of the Knight's idle pose is stored at the end of the Barbarian's graphics bank. This design's shield isn't pointed on the top and features less detailed shading.

A set of key icons that match the ones found in the prototype, extra silver key included.

These wooden bridge tiles are part of the MOUNTAIN5 tileset, but they're not used in that or any other map.

The prototype does not have region lockout. In the final, this text is very different.

This same text is present in the European Streets of Rage 2: 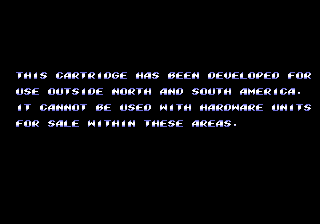