Beyond Oasis is the story of Ali, a prince who found a magical Gold Armlet. Throughout his adventure to stop the Silver Armlet's user (including dungeons, breakable weapons, food items, puzzles, boss battles, and sidequests), Ali can summon water, fire, shadow, and plant spirits.

Ali also has a versatile-yet-weak knife, but once he gets the infinite Omega sword...!

There are several hidden options available on the title screen:

These require a 6-button controller. Before using these, make sure the Diary screen highlights an empty save slot by default when you open it.

On the title screen, hold any of the below sets of buttons while pressing Start twice (the first to open the Diary, the second to start a new game). A sound will confirm the code was entered correctly.

Note that these codes don't always appear to work, and it normally helps to hold Start for about a second each time you press it. 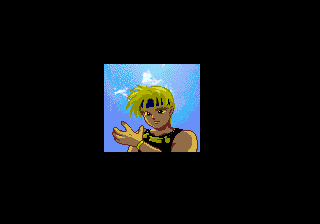 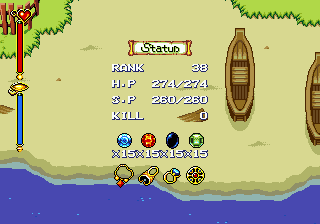 The rank given appears to be random, with 21-50 having been seen so far. 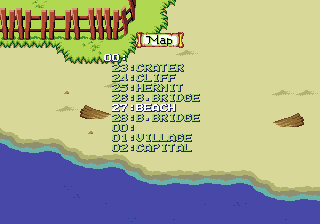 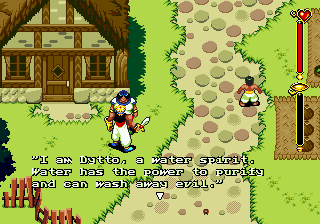 To access the dialogue viewer, hold X + Z during gameplay and press A or C to close the menu you just opened. With X + Z still held, walk up to an NPC and press B to talk. The game will now cycle through the story text. 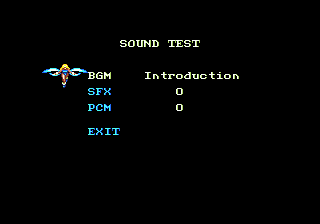 On the file select screen, highlight an empty slot and press B + Start. On this menu, press C to play a sound, B to stop it, and A to fade out. While a song is playing, some stars fall from the top of the screen.

Interestingly, this menu and other data somehow got copied into Crusader of Centy.

Among the sounds present in the sound test are some from Streets of Rage, another game Ancient worked on in regard to the audio. At least some of these are unused.

A slightly different message is at 062E58: 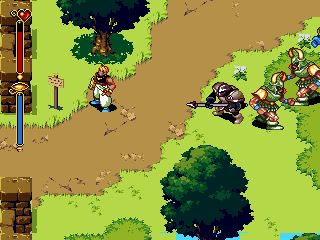 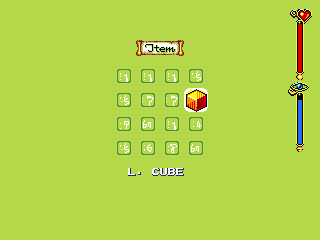 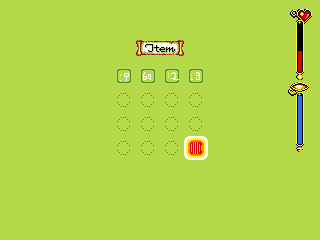 Present in the game are 19 unused items, IDs 0x2B-0x31 and 0x33-0x3E, all of which use placeholder graphics. None of the items can be used as weapons, food, or equipment, although 0x2B-0x30 can be dropped on the floor.

Oddly enough, the Large Cube, which does make an appearance late in the game, sits amongst the mass of unused items at ID 0x32.

The Japanese and European title screens are pretty much identical, while the US version changes the name and background.

Menu controls are different between regions:

This is a rather confusing change and seems counterintuitive to how menus work in most other Sega games. The player presses the B Button to attack, so maybe someone on the localization team thought the attack button should be the confirm button...?

The European version is actually based off of a slightly earlier build than the US game, so there are a few text differences between versions. Differences are underlined in the comparisons.

The Japanese and European versions have the game's title before the credits. Instead of making new graphics that say "Beyond Oasis", the US version just cuts out everything but "Staff."

The US version changes a few of the staff titles in the credits. The European version branched off from the US prototype builds before these changes were made, so the European and Japanese credits are identical.

There's an added space after the comma in the US version.

"Back Ground" was corrected to "Background" in the US game.

Yuzo Koshiro is no longer fruit and/or vegetables.

"DEADS" was corrected to "DEATHS" in the international versions of the game.

The Japanese version has instructions on how to display the "BEST 5" list from the title screen. For some reason, these instructions were removed from the European and US versions.