With larger character sprites, blitz attacks, and a better variety of stages, Streets of Rage 2 improves upon its predecessor in every aspect, helping the series transcend its roots as a mere Final Fight clone and into becoming a beat-'em-up classic in its own right. Yuzo Koshiro once again composed the soundtrack, this time he teamed up with Motohiro Kawashima. Together, they created, arguably, one of the greatest video game soundtracks of all time. 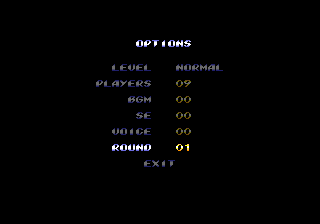 Hold A + B on the second controller and select the Options menu to add two extra skill levels (Very Easy and Mania), a setting for up to 9 lives instead of 5, and a stage select. The 3DS port enables these extra options by default.

This track, composed by Motohiro Kawashima, was named in reference to a street he lived by at the time. According to Yuzo Koshiro, this was an early track from when Kawashima was learning to program in MML for SOR2's music tools/engine.

It was later used in the underground portion of the fifth stage of Streets of Rage 4, when the retro soundtrack is enabled.

Track 04 plays an unused, slower version of "In The Bar". The Data Disks remastered release of the SOR2 soundtrack refers to this as "In the Bar (Alternate Ver.)"

Despite the name, Koshiro hypothesizes that this version was him tweaking and making improvements to Go Straight after his final deadline. How it ended up in the sound test remains a mystery.

An animation for Donovan in the air with a pipe, and using it exists, but goes unused. This concept was later put to use in Streets of Rage 4.

Viewing the Stage 8 elevator with a larger screen size, through use of a save editor, reveals a hidden door/wall set that can't be seen normally. The tiles can also be seen loaded into VRAM.

There is an unused animation in the game for Jet's appearance: he rises up from below the screen. It was likely changed because of how slow and long it is.

The Japanese and European versions use the Roman numeral II in their logos. The US version just uses a regular 2. The "Streets of Rage" part of the logo is lower in the American version.

Blaze's flying kick was slightly more risqué, showing her panties in the Japanese and European versions. The risqué sprite is also seen when selecting the game on the Nintendo 3DS.

When you see Mr. X in stage 8, he's smoking a cigar in the Japanese version. This was removed from all of the other versions. 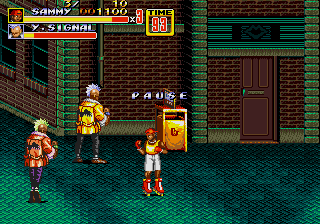 In the Japanese version, you can pause and press A to see how many enemies you've defeated. The first number shows how many you've defeated on your current credit, while the second shows the overall total.

This feature was silently removed from the European and American versions, although it's still possible to see the kill counts on the high score screen by pressing A.