This page details one or more prototype versions of Antichamber. 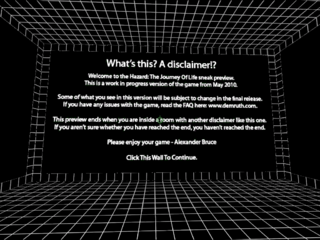 Hazard: The Journey of Life is the original name for Antichamber when it was in the alpha testing stages. There are three versions of Hazard: two of them are Unreal Tournament 3 mods and need that game in order to run, while the other is a standalone demo.

The Unreal Tournament 3 mods are similar to Antichamber in terms of puzzles, but have different signs and a different gun. The standalone demo contains only one puzzle and the old version of the gun.