This page details one or more prototype versions of Bayonetta (PlayStation 3, Xbox 360).

The Bayonetta First Climax Demo was first released on Xbox Live and PlayStation Network in Japan on October 8, 2009, and internationally on December 3, 2009.

The demo allows the player to experience the first half-hour or so of Bayonetta. You can choose between the tutorial, the "The Witch Hunts" chapter (called "The Falling Clock Tower" in this demo), and Chapter I.

To Be Continued Video

The demo displays a short teaser video after the results screen. Only the audio remains in the final version, in ra20.dat.

The file that contains the textures for this video and the results screen, result890.idd, also has some images that go unused. Many of these are later seen in the final version's credits.

result890.idd contains an unused tagline for the demo, as well-- "Foreplay" instead of "First Climax". 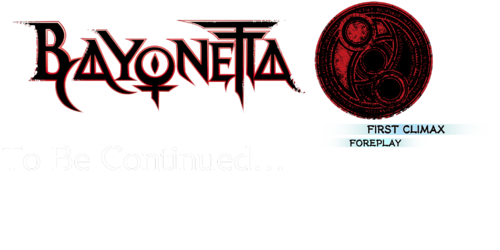 bg0070, bg0071, and bg0072.dat are models of a simple sphere with a vertically-flipped test texture. These files are absent from the final version.