The March 28, 1994 Prototype of Bonkers was released by drx during the February 23, 2008 proto release. This is the earliest of the Bonkers protos in that release and, for being 5 months and 4 days before the final build, it definitely shows.

Aesthetically, almost nothing remained the same in the final, including minor sprite revisions and palette tweaks. Audibly, it's a similar story to Star Fox, where only two of the build's tracks survived in the final game. In this case, it's an early version of the main theme, and the music for the Level Complete screen, which doesn't exist yet at this point. 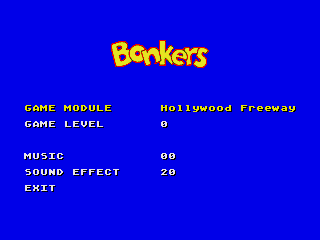 This appears as soon as the game starts. Game Module selects the level, while Game Level selects which act of the level to start on. Most levels only have up to 10 acts coded, and from then on there's either repeats, a bare background, crashes, or a blank screen with the level's music playing. Exit takes the player to the Sega logo (see below), and then the Junkyard stage. This option was later renamed to "Whole Game" to make it more clearer as to what the option does. The font used is the one from the Atari 8-bit computers. 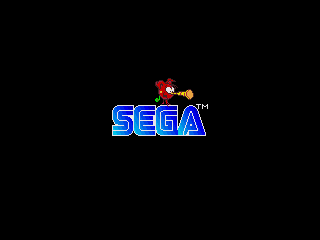 One of the available options in the Game Module section is Logo, which shows an animation that didn't make it in the final game. Bonkers' friend Toots from the show hops from the left onto the Sega logo. Much more familiar to fans of the show than the random animations that played in the final. 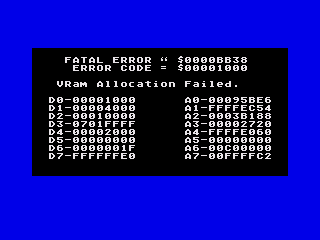 This comes up whenever the game crashes. Often it can be seen when you pausing and unpausing at certain levels (most notably the Museum). It can also come up when screwing around with the debug options. It can also rarely pop up at seemingly random times.

Pressing Start within a level will bring up an act select counter. Though, it somehow doesn't seem to always correspond directly with the same Game Level option at the title stage select screen. Selecting Exit to go to the main game, and then pressing Start and choosing any number with A, will always end the player up in the next consecutive level regardless.

Debug mode can be accessed when pressing Start within a level and pressing C. Pressing B lays out objects. There are a few other options available, but none of them will make much sense to most people. The debug implemented is too slow and not too welcoming to mess with.

What's considered the first level of the proto (as the player is directed here after selecting Exit, as mentioned before), this level is completely different from the final. In the final, the goal is to block the machine on the other side by throwing bricks to block him. Here however, Bonkers don't have much anything to do but just avoid what's coming at him. At first, he's confronted by a bunch of pogo sticks, then tires. 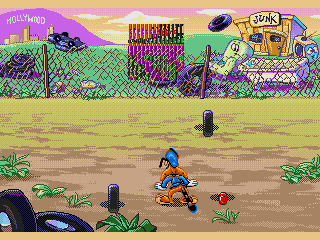 Eventually, the level moves onto a second act which definitely lingers longer, with more tires flying in. 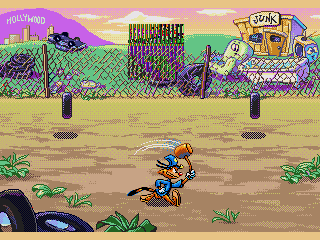 Sometimes, Bonkers can get a hammer to hit away any obstacles for a brief period of time, not unlike in Donkey Kong. 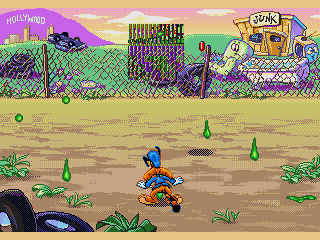 One of the later levels shakes things up a little, and throws blobs of slime into the mix.

The items that the raccoons steal appear to keep their graphics up to the final (bar their palettes), while everything else is completely different. All raccoons in the back go back and forth, while some make it up front, and others often get stuck. If Bonkers keep hitting them, the level eventually will move on to the next, but there doesn't seem to be a final level that's obtainable. One very important difference to note is the projectile. In the final, Bonkers just shoots straight ahead wherever he's positioned, and it hits whatever is in your path. It's a bit more convenient in this build, though the timing isn't as great. 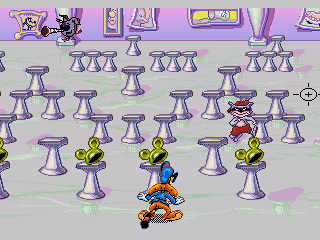 At random times, Toots will jump onto the screen with a screwed up palette. He doesn't seem to have any purpose implemented yet.

A VERY primitive execution of what was to become the final attempt. There really isn't much to see in this level. The player can drive around aimlessly through the small paths laid out. What ya see is pretty much what ya get. Two other police cars race around the area aimlessly. The controls are also somewhat different, and plays more like a traditional topdown racer. Pressing A (instead of holding it) will give the car a slight temporary boost in speed, after a short revving animation. With enough luck, by flooring into the many corners of the map, Bonkers can drive out of bounds. This can asimilarly be done to go back in bounds. 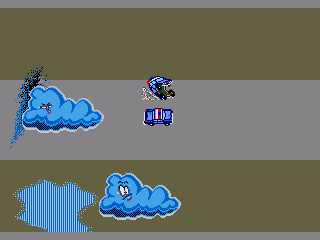 These clouds can be seen often. When approached, they become angry and emit thunder, after which a puddle of rain appears under them.

This level shares the same music as the Junkyard level. In the final, Bonkers has to collect all pieces of Fall Apart Rabbit before the timer runs out and the bomb explodes, if that makes any sense. The bomb in this prototype is instead a rocket. The gameplay is much the same as the final; destroy crates that jump around to collect the body pieces. Unlike the final where Bonkers does a karate chop to break boxes, you just press A next to them and he'll either push them, or break them right there. Unlike the final, Bonkers won't lose any pieces if he gets hurt. Whenever he stops moving, Bonkers will be left in whatever animation frame he was last in.

The screen that shows how many pieces of Fall Apart Rabbit the player has currently collected is accessed with the Start button in this build, instead of the C button in the final. The final game would rather receive a proper pause menu to make up for the change.

Fall Apart's right hand also was changed so that it's extending like the left one, most likely to avoid layering issues with his tail.

As soon as the level starts, that gray box underneath the cat on the left shot runs away from the player. This level can only be reached by choosing Exit, and going past the Museum Heist stage. It's unknown what this level was, nor what it was going to be. This level is quite small, and loops in all four directions.

This is another interesting look at how the game was starting out, as can be seen by the hand-drawn pictures and crudely-painted whatever-the-hell-that-is (a snowball cart with a sunroof?). The place is also crawling with cats and birds for some reason. Perhaps this was some sort of early idea for a bonus level?

This trash can is loaded into VRAM in the Junkyard level, but isn't used anywhere.

Retrieved from "https://tcrf.net/index.php?title=Proto:Bonkers_(Genesis)/March_28,_1994_Prototype&oldid=1245760"
Categories:
Cleanup > To do
Subpages