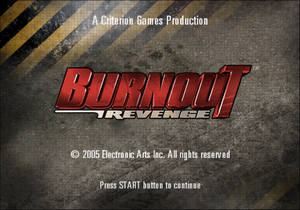 Most of the actual assets in these builds are from late May, and the very last July demo uses a full MainUS.bin string file from way later build, which is close but not identical to the one found in Alpha 7.

The main few things that are different between the PS2 and Xbox Madden, Standalone and Magazine demos is the color of the initial loading bar, changing from yellow to red, to blue and then finally to white and pink.

The title screen text differs between the PS2, Early Xbox and Late Xbox demo builds as well, with the Press Start string being longer in the PS2 demo, and the $Production string, being removed by this stage, since they used a more recent and full MainUS.bin string file. The ™️ symbol on the logo is also white in the late Xbox demo, just like in the final game.

The legal information video was changed for the European demo builds.

And the Burnout4 folder on the Official Xbox Magazine disc contains an image named B4.png which is similar to what's seen on the Title Screen, but the logo is way more saturated. The OXM UK disc also has a pics folder with a smaller resolution version of the same picture.

This will be mostly focusing on the PlayStation 2 demo, but the Xbox demo may be mentioned every now and then as well. There's not really that many differences between these two anyway. 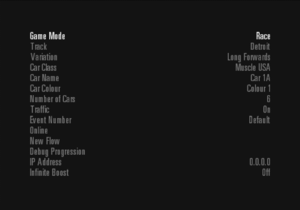 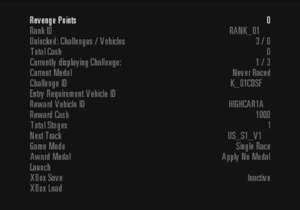 A debug quick start menu can be enabled by replacing the main menu with it, using one of the codes below. The playable game modes are Road Rage, Burning Lap, Eliminator, Car Viewer, 2P Race, 2P Traffic Attack, and 2P Road Rage. 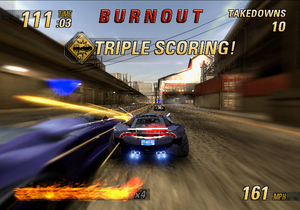 Road Rage is based off of the basketball game "Horse" and taking down an opponent adds a letter of "BURNOUT" to the HUD. If all the letters are collected, the timer freezes and the player gets a Triple Scoring bonus, and if the player crashes, all of the letters are taken away. Otherwise, the timer counts down starting from 3 minutes until the event ends. 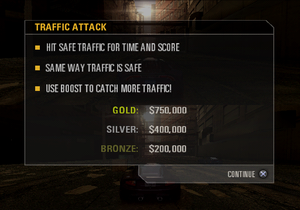 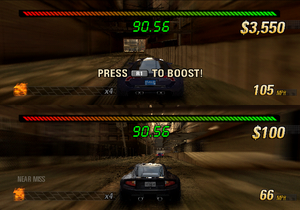 In Traffic Attack, single or multiplayer, you're given 100 seconds to get as many points as possible. The timer bar uses a red to green gradient, instead of a red to yellow, like in final. 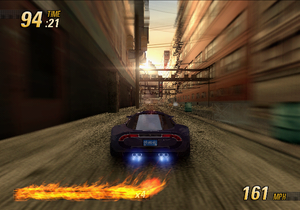 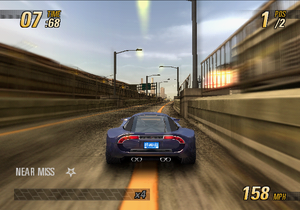 These two events aren't too different from the final version. Burning Lap simply counts up until you reach the finish line, and Eliminator, as expected, eliminates the last place every 30 seconds. 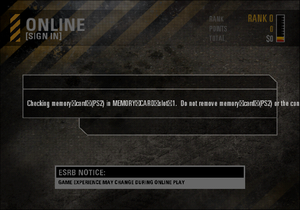 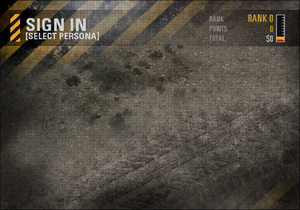 While most of the regular menu data has been excluded for these demo builds, two of them did survive. The menus are labelled as OPENINTERFACE/XBOXLOGIN and CONNECTINGPERSONA.

Several sounds are different, including the engine running, boosting, and Takedowns.

Has some leftover/unused sound files as well.
All of the sound data in FE.AWD, which includes sounds such as Main Menu and Online Menu sound effects, is identical to Burnout 3: Takedown.

The Criterion logo clip is different. It also doesn't have the scene mentioning Rabin Ezra's death, since it's about 4 weeks before it happened.

MAINMENU.m2v is an interesting little video. It shows off a car driving through an early version of Motor City. It is worth noting that this video was used in the game's menu when the game was called Rush Hour.

The boost bar has a different design, which can be seen in the final game’s tutorial videos. Present in GLOBAL.TXD\boost_base.

While there is no EA Trax available in the demo, its texture is a scaled down version of that in Burnout 3. Present in GLOBAL.TXD\EATrax.

There are two slightly different variants of the medal texture. One present in GLOBAL.TXD, and another in FEMAIN.BIN\b4medalicon and INGAME.BIN\b4medalicon.

As seen further above, the race results page displays the American flag due to Motor City being based in Detroit. INGAME.BIN\demo_results\* has three additional flags for Italy (Eternal City), Japan (Eastern Bay), and Switzerland (White Mountain) that are unused.

GLOBAL.TXD also has a bunch of crash pickups from Burnout 3. Most of these pickups can be seen in a trailer made for an earlier build of this game.

The texture layout for most the player vehicles are different, some even having colors that aren't present in the final game.

All of these are found under CAFE.BIN\stdctrl\* and none of them have a final counterpart, one that uses the same filename at least. Only inputText.tif survived in the final game, also as an identical placeholder.

Early names for all the Grand Prix events.

Cutscene clips for these holes can be found in the slightly later Alpha 7 build, though the strings here aren't present in that build.

Since none of the events are playable except one, all these strings go unused.

These strings are found in the full string file from the July Xbox demo. There are 44 song placeholders, even though the final build had 41 songs.

While using the quickstart menu, a couple of strange things happen. 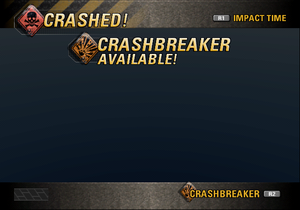 This game mode should load normally but in the quickstart menu, the game spawns the car in a coordinate out of bounds. Crashes on real hardware after the cross button is pressed. 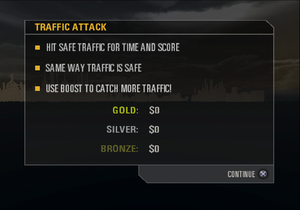 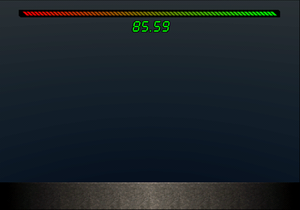 Same as Race game mode but all money targets are set to $0. However, Multiplayer mode works fine, it is probably missing data for single player. Crashes on real hardware after the cross button is pressed.

Retrieved from "https://tcrf.net/index.php?title=Proto:Burnout_Revenge_(PlayStation_2,_Xbox)/Demo_Builds&oldid=1167008"
Categories:
Cleanup > To do
Cleanup > Works In Progress
Subpages