From The Cutting Room Floor
< Proto:Crash Bandicoot 2: Cortex Strikes Back
Jump to navigation Jump to search

This is a sub-page of Proto:Crash Bandicoot 2: Cortex Strikes Back.

The June 15th, 1997 prototype of Crash Bandicoot 2 is a demo build showcased at E3 1997 dated around four months before the final NTSC release version. It was released on May 1st, 2021.

In the warp room, three button combinations can be inputted:

Unsurprisingly, some elements present in this build are incomplete and use placeholders lifted from the previous game. These are:

The demo normally allows the player to access four levels + boss on the second warp room, and three more levels on the first warp room via a cheat code. Sewer or Later, Hangin' Out, and Ruination are present only via demo mode, but can be playable through hacks.

Although the model and assets, minus dialogue, for his head and cutscene are in the files, they are disabled in this build. By inputting a cheat code, pressing and holding down R2 toggles between bringing up the head and returning the camera back to Crash. The game lags during this phenomenon. 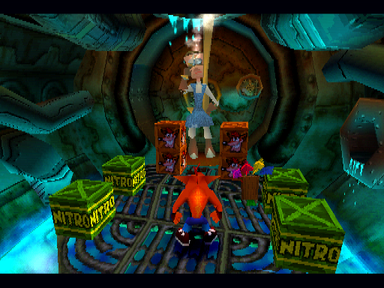 The level was completely re-done from scratch, and only some segments and ideas survived as recycled chunks of the final level design. The original layout resembles a labiryinth puzzle, forcing Crash to navigate wire meshes suspended above red-hot pipes and generally avoid sewer mechs, taking the level name more literally. It features lots of split-paths leading to dead-ends, which most of them contain ! crates. These switches would activate an outline bridge that would unlock an alternative passage to a specific path at the end of the level.

Overall, the level is in a primitive state. The ! crates don't seem to activate anything, and you can't complete it since Crash clips through the end portal. 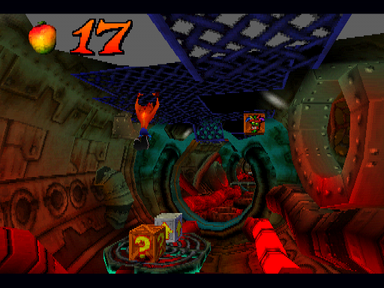