Crash Bandicoot 2: Cortex Strikes Back serves as the direct sequel to Crash Bandicoot, and sets the standard for the rest of the series by introducing Crystals, new abilities for Crash, an improved save system, and Coco Bandicoot.

It's bigger, deeper, even wider!

The level "Bear Down" contains one crystal and only one gem, but its entrance portal in the warp room holds a third crystal/gem slot with an internal name similar to those used for the secondary gems found in some other levels. The slot does not correspond to any gem or crystal, and if a gem is assigned by hacking, the lighting will also be incorrect. 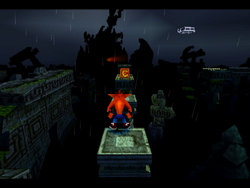 As shown in the June 15th, 1997 prototype, the level "Ruination" once featured a stone signpost denoting the "easy" and "hard" paths through the level. Although this signpost is no longer present in the final release, its object code and model data still remain in the game's files and are fully functional. It raises when Crash gets near it. Ignore the clear gem platform outline and the checkpoint's position, they were added by the hacker.

Not technically "unused", but in the level "Totally Bear", there are two boxes which are never seen during normal gameplay. These two boxes, a TNT and a life crate, are destroyed due to a mistake in drawing the TNT crate, as some TNT crates automatically destroy other crates when too far away.

The N. Gin boss battle has data for 20 missile paths, as shown in the beta versions of this game, even though only 10 are used in the final versions. Some of these unused paths are also mispositioned and can't hit Crash directly but will still damage him.

The levels "Diggin' It" and "Bee-Having" contain obj_hive objects which go unused as they do nothing since the beehive's position is calculated through the obj_bee_hive object.

Some of the in-game objects have different behavior not used in the final version of the game and that can only be accessed through hacking. These include a homing space bomb from the space levels used in early versions of the game, crate code leftovers from the first game, etc.

The E3 demo did not have a yellow gem path, as the gem platform was not there, and the gem path was instead a "hard" path, accessed by falling in the hole (the way up used the generic x-shaped platform encountered through the game). The scenery of the hard path is also directly connected to the main path, which is not the case for any other section where the camera instantly changes, and is also why a piece of it can be seen near the area with the bonus platform.

The zone "g1_aZ" is a leftover zone (an interactive area of the game, with collision, objects and/or cameras) from that version. It contains a small fraction of collision belonging to the pipe where the clear gem is hidden, but is placed as if the path would split at that point, as it did in the E3 demo. 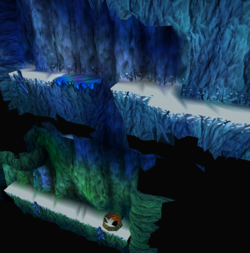 Using a level editor, it is possible to see that the end of Cold Hard Crash's bonus was originally connected to the first hole after Crash falls down from the ice-skating section, meaning that the platform would've gone up to that hole instead of near the bonus' start. This was probably removed due to being too unfair as the player would miss the death route and other crates on the main path.

The way the death platforms are named and set up in Air Crash would indicate that the player would be able to return to the main path while in the death route. However, this is turned off in the game.

In the files for the level "Road to Ruin", one can find some objects that are placed VERY far away from the actual level. These include a leaner, 2 falling platforms and 2 crumbly falling platforms. Putting them back into their (supposedly) original positions will make them clash with some of the existing scenery.

There are leftovers of some gem/crystal graphic slots, but most importantly, filled slots that originally would be 2D textures, which would be later replaced by the actual 3D models. This idea was most likely scrapped as these filled slots could be difficult to distinguish due to their similarities to the unfilled ones.

Another crystal slot that seems to be related to the fifth warp room.

These four placeholder images are loaded in the graphics data for the save icons until the save/load menu is accessed.

Grouped with the Ripper Roo files are some TNT textures with the numbers 1 to 8 on them. TNTs are never shown with the number 7 or 8 during the battle, making them unused.

Although the game does not have unused areas, it does have some unused scenery polygons never seen in the game from older versions of those levels. Them being "Turtle Woods", "The Pits", "Crash Crush", "Un-Bearable", "Hangin' Out", "Diggin' It" and "Bee-Having".

During the game's development, each game object was assigned a name to allow developers to identify the objects more easily. These names are still present in the game's files, some of which are noteworthy.

The ending unlocked after collecting all gems and crystals features a tall tower of gems at the start. However, there are 38 clear gems and 5 colored gems in said tower, totaling 43 gems, which would further prove that the level "Bear Down" was going to have an extra gem.

Excluding language, there are some minor differences between the different regional releases of the game:

(Source: Crash Bandicoot 2: Cortex Strikes Back - PAL, Crash Mania.net for the lab assistants glitch , the "demo glitch" in Rock It, & the "UIS" logo) 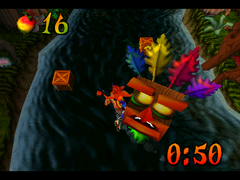