This page details prerelease information and/or media for Crash Bandicoot 2: Cortex Strikes Back. 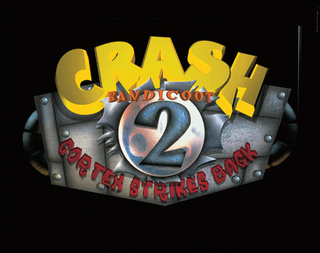 Early draft of the logo first displayed at E3 1997. Has considerably different lighting and choice of font colors.

Screenshots of a very early version of the game can be found in old magazines, including NEXT Generation, Computer and Video Games Issue 190 and Electronic Games Monthly Issue 95. They were taken from the earliest build currently known.

Just about everything is different in this old Warp Room. Most notably, the Cortex hologram appears from the center in a straight angle, rather than being projected by the flying camera bot. There is no lift in the middle of the room and both the surroundings and the crystal/gems display above each level is different too. According to Naughty Dog co-founder Andy Gavin, it was quickly put together for the E3 1997 booth of Crash Bandicoot 2, which does indeed use this warp room.

Diggin' It featured a considerably different color scheme and layout, with trees and totems on the side instead of icy rocky cliffs with ice. The first screenshot shows an unknown section of the level, while the second one shows the ending. The floor is entirely covered of a pinkish snow.

This screenshot shows the area where you usually get the crystal from in Sewer or Later, but the object placement is quite different.

This trailer comes from an old Official PlayStation Magazine demo disc. There are lots of early elements.

Starts at 26:24. It seems to be the same build used in the previous trailers.

Off-screen footage was recorded of the prototype being played on the show floor.

This prototype was used as preview in some magazine scans, but it's hard to determine if it's one of the builds mentioned above, but since the text font used in the levels is already the final one, it's likely to be a newer build.

It's possible this version was a tech demo and only a few levels were chosen to be available, which could explain why Hang Eight and Tiny Tiger were in different locations, despite older builds showing Hang Eight at the final location. It could also be the same one used at E3 1997, as the same levels shown in the magazines are present in that build, and Tiny Tiger is also the boss. 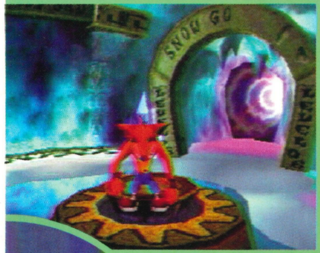 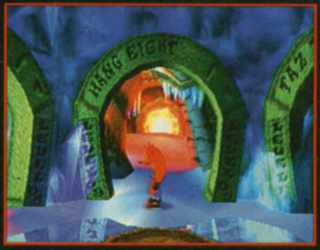 Back in 1997, MTV produced a one-off show called GameBrain that covered new video game releases. The staff received a prototype of Crash 2 for display in one of their programs, and it shows plenty of changed and removed material.

These very early screenshots came from a pack of six CD-ROMS containing a variety of press releases and multimedia, compatible with PC and Macs of that vintage, produced for the 1997 European Computer Trade Show. Some of these screenshots matches the same ones used in the NEXT Generation preview, meaning that could be the earliest known build.