By setting 0x02000014 in the RAM or 0x7FBD18 in the ROM to a non-zero value in the US version, or using GameShark SP/Codebreaker code E99B8028 EC01 on the US version, you can double the speed the game runs at. However, only visuals run at that speed - the audio still plays at the normal speed. As well, setting up a link game is impossible, as either game will fail to recognize each other, unless both games are using this code.

If one modifies the engine in some way, or goofs up in programming it, and the engine doesn't like it, it'll actually spit out an error! The following error was generated by modifying the pointer to the sound table so that it read garbage data. 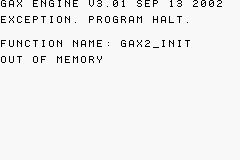 Check the below section for a list of potential errors that can show on this screen.

There is all sorts of development-related text for the GAX Sound Engine present in the ROM.

The following text is from offsets 0x51CBD0-0x51CDB4 in the Japanese version:

Related to initiation of the sound engine in the game, the GAX Sound Engine by Shin'en Multimedia.

Just after the above text, a warning signalling that the sound engine has run out of memory.

Some kind of comment on what the engine can and cannot do.

Some kind of warning.

Another set of warnings.

The following text is from 0x51CED4-0x51CF1D in the Japanese version:

The version of the sound engine, and its build date.

A piece of debugging text, most likely for finding errors in the sound engine.

Just like above, the version of the sound engine, complete down to the date and version number. This also contains a copyright and the name of the person that coded the engine. Version v1.99d of the same engine is used in Iridion 3D. B.Wodok = Bernhard Wodok.

A string is buried in the ROM that shows the way that the games communicate. However, this also shows that there was the potential for a third Crash Bandicoot Game Boy Advance game, which ultimately never materialized. This third game is also hinted once the final boss is defeated.

Each of the atlasphere levels have a name referenced from the level entries. These are Test, Prototype, Standin, Demo, Single, Double and Triple. The last 3 are the ones used in the main game, while the first 4 are for the multiplayer levels.

As is with most GAX Sound Engine games, the song writers' name is credited in the footer of the audio file.

From the main title screen theme.

The overworld theme for the game, where one accesses all the various levels.

Used in the level vs. Fake Crash.

Used in the level vs. N. Tropy.

Used in the three wakeboarding levels when the shark approaches.

Used in Island Intro and in Atlas Sphere levels.

Used in the level vs. Evil Coco.

Used in the level vs. N. Trance.

Used in the level vs. Evil Crunch.

Used in cutscenes featuring the antagonists.

Used in cutscenes featuring Crash and various other protagonists.

Used in wakeboarding levels, when the shark is not approaching.

In the level metadata there are time trial values set for the boss stages, even though they do not have time trials in-game. The values for these are all the same, with sapphire being 35:05, gold being 27:05 and platinum being 23:03.

In the character array for the atlasphere levels is an unused entry named "BONXBONX". Selecting it will return the Crash model used by Player 2 in the Atlasphere multiplayer mode, which is the exact same model only with green pants. It has no icon graphic.

The song "cutscenes" is a leftover from the previous game, The Huge Adventure. It's used in the game's opening cutscene.

Within the text engine, hex byte 0x02 can change the text to a white color, however, the only places white text appears is in text whose colors alternate, such as menu screens to show the currently-selected option. This therefore renders this byte unused because the color for the menu selector is programmatically changed.

Through memory editing, it's possible to start a level with Aku Aku's third stage, rendering Crash invincible for the regular duration that getting three Aku Aku crates provides, if the level allows for him. However, because Aku Aku's stage counter cannot be set to a value higher than 2 unless you hit an Aku Aku crate within a level (and it resets to 2 if you finish a level while invincible), this feature goes unused. The same routine responsible for this, however, does ensure that if Crash has his first or second stage, he keeps it.

While it is impossible for Crash and Evil Crunch to ever make contact as the AI will move Crunch away from Crash if approached, Crash can still take damage if the two do touch.

The European release has a drastically different version to the US release, which was the base design used for the Japanese localisation. The color of the gears was changed from silver to blue in the Japanese version.

The copyright screen was also updated because Konami released the title in Japan. While it remains identical between the US and EU releases, The screen also uses a more bold text.