Crash Bandicoot is more or less one of the killer apps for the PlayStation. Paraphrasing the original developers, "there was more content cut than content that made it into the final game". 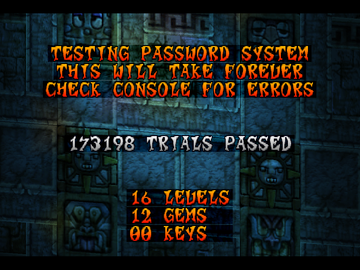 In the title/map/options/etc. level, if the game screen (GOOL global 18) is set to 14 (memcard screen) and GOOL global 1 is set to 10, a password test screen can be accessed, meant to test the integrity of the password encoding and decoding system. Spoiler alert, the password system functions perfectly. Once this screen is entered, you cannot leave it, as none of the buttons do anything.

The password test involves generating a random set of game stats, encoding them into a password, generating the inputs for the password using an "auto-password" system used exclusively for this test, type in the generated inputs, decoding the password, and seeing if the stats came out the exact same. The game tries to test one password per frame, but since the whole process runs through a lot of code and heavy operations, the game can only test around 20 passwords per second. The test runs forever, and if a trial fails then a few "no operation" instructions execute and the test simply stops running. Despite the instructions given, no text is printed to the console (no, not your game console) if an error occurs.

Stormy Ascent is one of the most infamous cut levels from the Crash Bandicoot series. Originally meant as the final level of the game, it was later cut mostly due to its brutal difficulty.
To access it, use this GameShark code to boot into the level:

Programmer and Naughty Dog co-founder Andy Gavin provided commentary for its exclusion from the final version:

"It was too hard and we didn't have time to make it easier. I wish we had put it in as some kind of Easter egg, as it was an awesome level, one of my favorite in the game. Long, a bit brutal, but it looked great, and had a real rhythm to it."

The level is available as DLC in the remake.

An eye-catching subterranean environment, this unused level was present (and also unused) in the disc of the April 8 prototype build. While all of its assets still exist on retail copies, and remain unchanged from the April 8th build, the game freezes when forced to load the level due to its older format, rendering it unplayable. The footage of the level shown above is therefore taken from the prototype. Its level ID is 04.
The level features a unique entrance not replicated anywhere else in the game, where Crash spawns airborne, and descends onto the scenery as if he had fallen down from above ground. However, the level itself is unmistakably unfinished - there are no obstacles or enemies present in this level, and the cave located across the wide acid pit leads nowhere, rendering it impossible to finish the level. There are various old fruits laid across the path, but do not appear as they refer to removed objects.

Not technically an unused level, although the last floor of "Sunset Vista" continues well after the point where the level normally ends. The world geometry gets progressively more incomplete and less textured. The collision and camera function properly, but there isn't exactly much to stand on. There is an invisible wall at the far right edge at the end.

An unused bonus round level, meant for super long bonus rounds, of which there are none in the game, meaning you'll need an invincibility or similar cheat to get to the end. It has been left in a vastly incomplete state, with wrong outdated textures and old files, such as the crystals at the start having wrong textures and Crash's warp in effect being rainbow-colored. Tawna is meant to be waiting at the end, but missing files will make her crash the game instead. It has a similar layout to the Brio bonus rounds, with different colors, and files for Brio are also present. It contains old versions of the code files WillC (Crash), FruiC (fruit and pickups), DispC (HUD and bonus round selection), ShadC (shadows and boss health meter), DoctC (witch doctor Aku Aku), BoxsC (boxes and explosion particles), WarpC (warp out), KongC (Koala Kong boss), BonoC (bonus rounds), GamOC (general game progress) and CardC (memory card save/load and passwords).

The normal ending after defeating Cortex was originally meant to, similarly to the ending in "The Great Hall", play a series of epilogues with each of the six boss characters. This cutscene-level has all the data needed for epilogues and even specific (placeholder) text for it, but the normal ending cutscene simply never plays them. With hacks, the epilogue can still be played just fine. The reason for their (partial) removal is unknown, possibly to make 100% completion have at least some sort of unique reward. In the NTSC-J version, the Pinstripe and Cortex epilogues have their translated level name as the title, possibly by accident/coincidence.

The fish in the levels "Upstream" and "Up the Creek" spawn a shadow, but it never appears in-game because the fish never set their shadow flag.

Ripper Roo spawns a shadow in his boss fight, but it never appears in-game because the shadow flag is never set.

Due to an oversight in how the screen shake variable is checked, at the end of the Pinstripe boss battle when Pinstripe shoots the generator, the screen is moved up slightly and then back down after a few seconds. The original intent is to keep the screen shaking until the boss ends and Crash celebrates, which looks very nauseating anyway. The oversight happens in this piece of code for the generator (shown as Lisp pseudocode):

At first, SHAKEY is set to -4. After the game finishes setting up its graphics matrices using the -4 value, it automatically flips the sign of SHAKEY and sets it one value closer to zero (in this case, -4 becomes 3). On the next frame, this code runs again: SHAKEY is not lower than zero, so it is set to -4. The game uses -4, sets it to 3, etc.. At the end of the boss fight, the value is set to zero, returning the screen to normal. This can be fixed if the branch condition is flipped.

The level "Lights Out" actually has a skydome, meant to be seen when Crash takes the yellow gem platform up and outside the castle. Unfortunately, this nice view is never seen in-game as the model for the sky isn't set to ignore the natural darkness of the level. Oops.

The generator that is destroyed in Pinstripe's boss battle plays a sound that is played at such low volume that it is nearly impossible to hear in-game.

The sound of the boomerang hazard in the level "Whole Hog", itself not used in the final game.

The Japanese sound effect for Brio getting hit (the English version being a sort of "doh!") plays at a stupidly low volume in-game and is therefore inaudible.

Four music tracks contain leftover note data that do not play a sound, either by accident or due to technical constraints.

Bonus round IDs are also not linearly mapped to levels. Which bonus level Crash gets teleported to and which bonus round ID to use is determined in DispC, based on which type of pickup Crash has collected 3 of and the level you are in.

Code for one object may not be the same across levels.

Every version of the game contains dummy files to pad out the game's disc content, likely as an anti-piracy/online download measurement. The PAL and NTSC-U versions of the game contain the file ZBSPTREE.WAD, which is a little over 300MB in size and is filled with useless garbage data. The NTSC-J version of the game contains the files ABSPTREE.WAD, the same size as the previous file, and ZTAIL.WAD, a 40MB file filled with zeros. The game never checks for any of these at any point, and thus they can be safely removed. The moral quandary here is whether you want to harm the integrity of your game or not...