From The Cutting Room Floor
< Proto:Crash Bandicoot
Jump to navigation Jump to search

This is a sub-page of Proto:Crash Bandicoot.

The April 8th, 1996 prototype of Crash Bandicoot is a preview version dated over three months before the final NTSC-U release version. It was released in October 12th, 2011.

A very unfinished test level. Oddities include Crash turning green upon getting to the top of the hill and the TNT box not having a countdown. Andy Gavin personally used this level to test the animations for spider and lab assistant enemies, its small size hugely shortening the rendering time needed for the level to load. The 3 crates each contain a Tawna token, and obtaining all 3 will cause the game to load the player into a Tawna bonus round. This level is normally not clearable due to a large gap, but with the use of invincibility, you can reach the end to see Tawna who will provide you with a 6 character password. Unfortunately, this password doesn't appear to do anything.

"Haha. That isn't a mini game. That's a recording of "level0" which was my programming test level. I was just testing spiders and the labass. It was always very useful to have a level that was super small (hence I could process it in 3 minutes instead of 6 hours). I'd just stick whatever creatures I was programming there first and do all the programming I could on them BEFORE putting them in a real level." 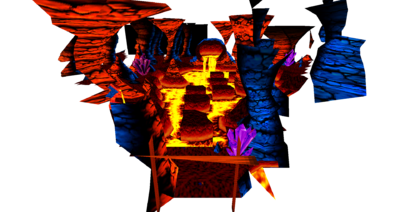 "Our first two test levels "the jungle, level1" and "lava cave, level2" were abysmal, and neither shipped in the final game. First of all, they were too open with way too many polygons. Level1 had over 10 million, whereas a shipping level tended to have around a million (a lot back then). Level2 was better, but not much."

"There are no lava levels, a staple in character action games, because Crash is orange. We made one in Demo, and that ended the lava debate. It was not terribly dissimilar to trying to watch a black dog run in the yard on a moonless night."

The level still contains its collision tree, too, and it shows more to the level than what we can see through extracting the scenery:

Just about anything can kill you here, even the walls. However, it has no enemies, obstacles, or any way to complete the level. Also, the acid doesn't kill you at all. Interestingly, the screen turns dark when Crash dies in this level, but the camera won't spin around his body.

By hacking, it's possible to see that the level does actually have fruit, the old fruit mentioned below. It appears in the main path of the level as a trail and over the platforms.

Bizarrely, this level still exists in the final game's code (as level ID 04), but as all of the levels playable in the retail build utilize a newer coding format, it freezes when forced to load, rendering it totally inaccessible.

A glitchy unfinished level. Also known as the waterfall level, this one was cut from the final game. Players dodged and weaved through falling platforms, catapults, slippery surfaces, rotating platforms, and the aforementioned waterfall you went in front of and behind while climbing to the top. Enemies here include red plants, skunks, turtles, and a cut hyena enemy. When you die on this level, you may start to glow for some reason.

There is no way to complete this level, as the player comes across a dead end. The end of the level bears a strong resemblance to Ripper Roo's boss level, implying that the waterfall level may have been intended to precede Ripper Roo's boss fight. In the final game, the level Up The Creek takes its place.

Interestingly, it contains data for an earlier version of the POW crate featuring red textures, which is only accessible through hacking, as seen in this image: 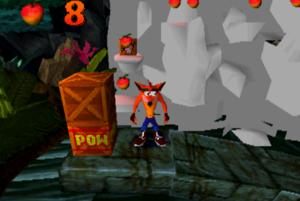 Also not accessible through attempting to use the level modifier 10 on the internal level list, this unknown level is more complete than the lava cave in terms of layout, but uses even older code. The layout of this level directly replicates the first level in Donkey Kong, and there are bouncy plants from the cliff level. There is also a grey textureless ball which goes down a path. Interestingly, its code file is named "KonOC", the same name used in Koala Kong's boss fight. Using a custom tool, it's possible to get a view of the level.

The last unfinished level in the prototype. Glitches include walking on thin air, being able to walk under the stage, random objects disappear and appear as Crash walks into them, invisible platforms, being able to walk behind the stage, untextured platforms, and as always there is no way out of the level. Due to a mistake in loading textures, they get scrambled near the beginning of the level. The HUD also appears broken.

This theme is present inside Jungle Roller's NSF file but, due to the lack of any music playback code it never plays.

Unlike the rest of the music in Crash Bandicoot, the music found in the test room is split into multiple sequences per track - this is strange as it's the first and only time it has done so. The volume to these tracks get quite loud so this is a volume warning:

This test theme is an arrangement of "Dance of the Sugar Plum Fairy".

The prototype for Crash Bandicoot contains a lot of unused objects scattered throughout the NSF files.

The contents of the NSF file for the Lava Cave contain an enemy named of SnakC for its code and something similar for its animations (which albeit in an older format, can be still opened). What the snake does, exactly, is unknown for now. The snake is inoffensive and easily killed.

A model and animation by the name of Shro(V/G) resides in the same location as the Snake. It looks like a pink ball with green leaves sticking out, similar to the plants in Upstream and Up the Creek, but much more simple. It is part of the fruit (i.e. loose pickups) code. 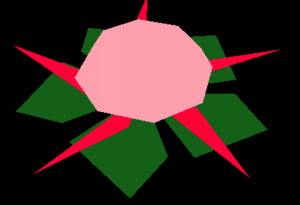 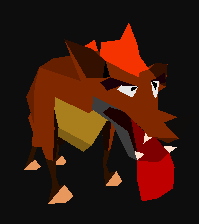 Obstacles found in the files for Boulders and Boulder Dash that act as roadblocks. They have low and high variants.

This roadblock is an obstacle found in-game when playing the Cliff level. You can destroy it by spinning into it. 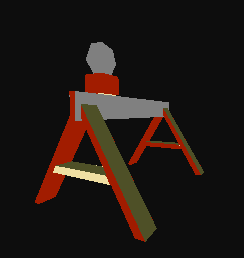 A falling rock obstacle found in the files for multiple levels but only used in the Cliff level. It has untextured brown and gray variants. 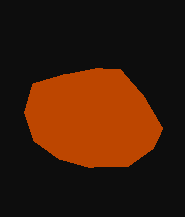 No, not the spin attack. A weird animation by the name of WiGSV. Unknown what it was used for, although the last few frames ARE still used in the final version as the post-spin animation.

It is possible to use early code from the game in levels postdating early levels that actually used the code. There are some differences with this early code: 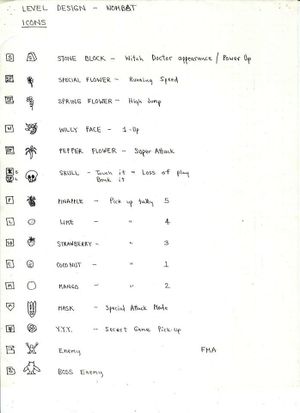 Some of the most interesting text in the executable file (PSX.EXE, the default name).

Probably an even earlier password system, used in the SGI version of the game.

Corresponds to files inside the S0000019.NSF (map, main menu, etc.) archive. cMapP is the game over screen, 1MapP is the first island and 2MapP is the second island, while 0MapP doesn't exist at all.

All correspond to the subsystems in the game. Interestingly, PBAK (demo) and CVTX (colored animation) files are not ever used or present in the files for this build.

A string of text representing the ID of the level that was just beaten.