Crash Tag Team Racing is a racing and platforming game built on The Simpsons: Hit & Run's engine (as evidenced by a similar file structure and tools to mod that game working with this game).

Being the successor to 2004's Crash Twinsanity, it features character models inspired by that game, and also contains some assets from it. The game was largely coded in Lua, and it's fairly easy to view and edit its scripts. 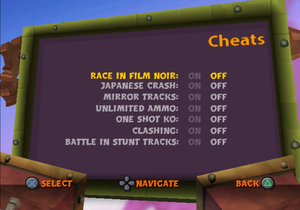 In addition to the already implemented button based cheats, there's an unused cheat screen with a couple cheats that are unavailable in any other way. Unfortunately, the menu was not fully implemented, so it doesn't save your preferences when you exit. Exiting the screen puts you into the extras screen, suggesting that was its original location.

There's a fully functional "Buckethead" costume for Crash, which gives him a textureless low polygon shape as a hat and appears to use an early version of Crash's model. Its spin model looks identical to the costume-less Crash.
It's not obtainable in-game in any way, however the game's coding suggests it being unlockable via cheat code, and belonging in Astro Land:

The controls.god file in the COMMON.RCF cement file can be used to bind a scrapped racing feature called the "scootch" to buttons.

It gives the player a sideways boost that damages cars on impact and maintains drifts. It's split into two directions (L2/R2 on PlayStation 2) and a stick X-axis (Right Stick on PlayStation 2) to replace the two buttons.

An unused skybox for Mystery Island known as skybox_adventure2.p3d can be found in the DEFAULT.RCF cement file.
It seems to have originally been for "Pirates of The Carburetor" similar to the "Tyrannosaurus Wrecks" Tracks.

The level list in the startup.god file in the COMMON.RCF cement file contains entries for three unknown levels:

Note: These are not the bonus arenas from the PSP link, those are called bonus1_arena and egypt_arena.

"Track.p3d leftovers" Leftover beta versions of Tracks, Battle/Stunt Arenas, and Hub Areas. These can be found within the DEFAULT.rcf cement file in the NTSC PS2 version.

"onfoot_hub" aka the area that was at the end of the prototype trailer is an unused hub area that was most likely used for testing and was probably made as a style guide for the Tomb Town race tracks. It can be found within the DEFAULT.rcf cement file in the NTSC PS2 version.

"bonus2_arena" is an early rough version of "Hardly Ever Land", this can also be found in the DEFAULT.rcf cement file in the NTSC PS2 version aswell.

There are prop layouts for a scrapped "Cone Attack" race track mode (as a 6th main mode) in the 0.RCF cement file of the NTSC-U Xbox version.
They exist only for Tyrannosaurus Wrecks and Astro Land tracks. One version of the demo also contains a layout for Track And The Beanstalk.

The MOVIES.RCF cement file contains an unused "weenie_placeholder.bik" FMV. On the PlayStation 2 version, it depicts an early render of a die-o-rama or gem collecting cutscene. Its name suggests that it was a placeholder at some point.

The MOVIES.RCF Cement file of the PlayStation 2 version of the game contains an unused early version of the cutscene for unlocking the shortcut for Deep Sea Driving titled "SinkShip.bik".

An unused Radical Enterainment logo can be found in the PlayStation 2 version of the game in the MOVIES.RCF Cement file.

The DEFAULT.RCF cement file contains level music from Crash Twinsanity (Cavern Catastrophe and Rockslide Rumble), with filenames such as temp_race_hth.wav, suggesting temporary placeholder use in races.

Note: The Rooftop Rampage theme also exists as tempba_rooftoprampage.wav, however it is used in one of the arenas unlocked by linking the PlayStation 2 version to the PSP version. That being "The Tragic Kingdom".

The various driveable cars in the game go unnamed outside of Multiplayer's Gift Shop, where they are listed as purchaseables for players to unlock during a multiplayer session, with the noteworthy exception of the PSP-exclusive cars: as these cars aren't available for purchase in the PS2 version's Multiplayer mode, and players can't buy cars from the Gift Shop in the PSP version, they go unnamed in the final game. Their names are still included within the game's text resources; these text resources can be located in adefault/default.rcf/art/frontend/frontend.p3d and adefault/default.rcf/art/frontend/frontend_pal.p3d, inside of the Frontend Text Bible labeled "frontend" for each.

While some of the PSP cars made an appearance in Crash Team Racing Nitro-Fueled as selectable kart bodies, these names were not used due to being first discovered after that game's release.

The Japanese version turns the "Japanese Crash" costume into the default one, as well as feature versions of the other costumes based around that model (although some costumes such as the "Nega Crash" costume are still the same). This also means that all of the costumes use Japanese Crash's different animations including the unchanged costumes.

Crash's icon within races was also changed to match his Japanese design. Despite being the first Crash game in Japan to feature a different in-game model for Crash, his voice clips remain unchanged from the international version despite some of the earlier Crash games giving him a new Japanese voice.

While the pre-rendered cutscenes still feature the original Crash, the Gags and Die-O-Ramas were given new versions featuring the Japanese Crash, presumably so as to keep some consistency. The loading screens are also altered to contain Japanese Crash as well as a redesigned ninja penguin.

All instances of crude humor were removed: