From The Cutting Room Floor
Jump to navigation Jump to search
This page contains changes which are not marked for translation.
Other languages:
English • ‎polski • ‎русский • ‎한국어

If The Simpsons and Grand Theft Auto had a love child, the result would most likely be The Simpsons: Hit & Run. Surprisingly, the end result is a pretty solid clone and what many consider to be the best Simpsons game. Not only that, but there's a lot of interesting unused content lurking inside, and we're not kidding when we say a lot.

I wish I had a dog with a saddle.

The "\scripts\missions" directory contains two empty folders labelled level08 and level09, and the "\art\missions" directory contains a level08 folder too. Inside of the second "level08" folder are two unfinished P3D files with vehicle data (which is used in missions to determine where the vehicles are positioned along with some other miscellaneous information). It's worth noting that it contains eight different start points when the game can only handle four vehicles at once. These were confirmed to be placeholders by a former Radical Entertainment employee.

The PC version has some temp.err files in many directories with content. The said files refer to using a development script to clean source assets before release.

The entire directory in art/frontend was copied over on the disc and never gets used by the game. It contains uncompiled project, screen and page files from Scrooby early from development, a proprietary screen editor of Radical, named after Scooby Doo for some reason. It also two uncompiled localization files for the base game text (in all languages) and the credits, also localized from that said tool. The images in it suggest the content was from the PS2 release. 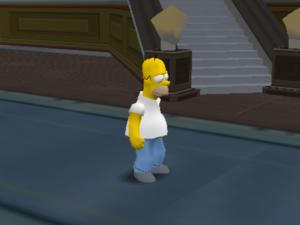 The interior and front garden of Mr. Burns' Mansion are modelled and present in Level 1, and can be entered through hacks or with cheat code/bug exploits. The mansion is almost identical to the Level 4 counterpart, with a few changes. The front/back doors are closed, there is an invisible wall present around the middle chunk of the garden, the interior Krusty Glass doesn't always load, no road nodes exist, all props are missing and the interact spot/moving set pieces in the office don't exist (the walls act as though they have been flipped and there's a hole in the floor where the table would be). 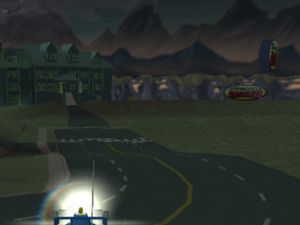 Due to time constraints and to make the artists' workload more manageable (as confirmed by a former designer on the Donut Team forums), the Rich Side/Springfield Nuclear Power Plant interior areas had to be cut from Level 7. If the player manages to get out of bounds to the Rich Side, however, plenty of leftovers can be found: 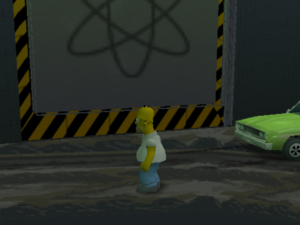 Behind the mysterious door. Spooky!

Just like the Rich Side, the Nuclear Plant in Level 7 is blocked off, but can still be accessed via hacks/exploits. There are no map leftovers, however. The sound triggers for the spinning wheel room and nuclear waste tunnel are leftover and functional. 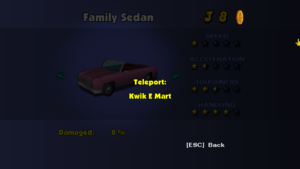 The menu in Level 1.

An unused teleport menu that was probably used to test the game can be accessed in the Windows version by changing byte [[[6C894C]+2c]+CC]+2DC4 to 1 (per level load) and pressing F2 at the Phone Booth menu. It replaces the normally used cheat code "all vehicles" Phone Booth sub-menu, so access to that is also required. The menu allows one to warp between various level locations that are preset via the level's "level.mfk" file (scripts\missions\level0X). There are some related bugs, however: loop scrolling to the left in the menu doesn't work, the camera can be buggy when teleporting and triggers to change ambient audio, ambient light and pedestrian groups are skipped if this is used.

In the files, by using text editing programs, the player can find three unused gags all meant for Evergreen Terrace (Levels 1, 4 and 7) and one for the Springfield Squidport (levels 3 and 6). These gags do not have a set place for where they appear, or have been commented out, making them unused. Setting a place for them in the game will allow them to spawn.

By using cheats or mods to go out-of-bounds in the level maps, the player can see some unused objects that are either erroneously misplaced or some leftovers that seemed to be from earlier in development.

In Level 1, there are two portraits that appear to be Simpson-styled versions of the painting "American Gothic". These were most likely intended for an earlier revision of the Stonecutter's Tunnel. 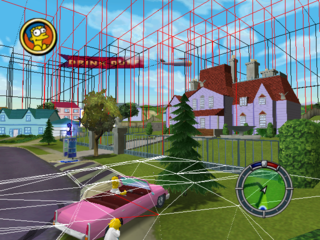 By using a cheat code in the in-game options menu, one can toggle a debugging tool for collision. The area where the player's character or car is marked red, while the areas that aren't are white. It continuously changes as you drive along, the areas shown being the closest to you.

Fair warning: on original hardware, this function is known to cause slowdowns.

The game's cheat code index contains entries for several effects with no assigned button code, hence they go unused. Most are currently unknown.

Each platform on which the game was released received a slightly different revision. In addition to this, the Windows version got a re-release later. Some of these changes were hardware related, others not so.

All console versions of the game are capable of displaying in Progressive Scan (480p). The procedure for activating this display mode varies by console. Despite the similarity that all console ports can display in Progressive Scan, the confirmation screen actually looks different between the PlayStation 2 and GameCube versions. The steps for those consoles are listed below their respective screenshots. As for the Xbox version, connect the console to the TV using a device that enables the console to output HD resolutions. Then, while on the Xbox Dashboard, verify that the 480p option in Video is enabled and insert the game to start playing.

There are three variations of the game's audio.

The refraction effect used by the Hover Car is different across all versions.

Additionally, the transparency effect doesn't appear to work properly on GameCube, causing the windows on the car to not be transparent. This may be a result of a technical limitation with the refraction effect, as the windows actually do use a shader that supports transparency.

The 'Best Sellers' re-release of the PC version features some very minor differences to the regular PC version.

The PAL version of the game features numerous changes to allow for different languages to be supported.