This page details one or more prototype versions of The Simpsons Game (PlayStation 2, PlayStation Portable, Wii). 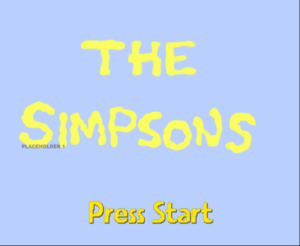 A build of The Simpsons Game for the Nintendo Wii was found and recovered from an EA RVT-H hard drive. It is dated July 6, 2007, which is around 3 months before final. Some aspects of this build are closer to the colloquially called New Generation (PlayStation 3, Xbox 360) version, and some are closer to the final Old Generation version, which means comparisons in this page will be drawn towards both releases. There are plenty of things to unpack here.

The textures for the game in Data Management of the Wii console are simple placeholders.

The root of the disc contains 8 batch scripts from internal development. The two starting with build have an option to fetch the latest assets from a Perforce depot.

build_moments_rpf.bat appears to be a script for copying assets for Wii Moments, and making a build of the game with them!

build_rpf.bat is a script to build the game with all assets.

make_simpsons_image.bat is simply a script to make the game image. Nothing too fancy.

Run_Before_Makemaster.bat appears to be a script to run first before using the above script.

run_simpsons.bat appears to be a simple script to run the game on a development Wii console, nothing too special.

RVM generator - part 2.bat appears to be a script to make the game image. Only this file is present so whatever is in a possible part 1 batch script will be a mystery unsolved.

stop_simpsons.bat appears to be a simple script to stop the development Wii console, nothing too special.

update_elf.bat appears to be a script to update the game executable.

This build by default loads into a debug screen, letting you choose whether you want to "Enable proper menu flow" or not. Choosing No Way will proceed you into a 2nd debug screen, which allows selecting a level to load on the spot. 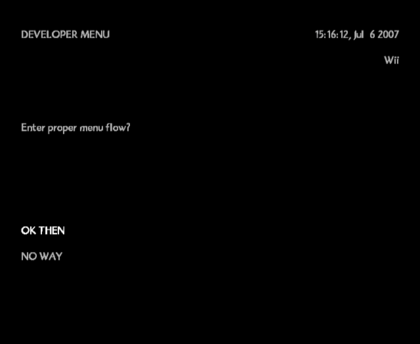 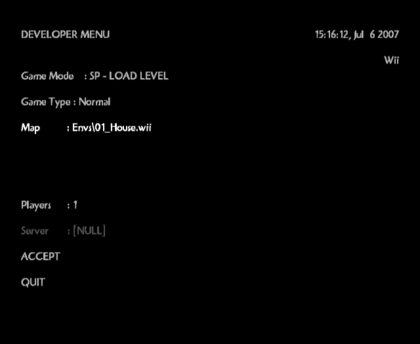 Some episodes use a different name that only survived into the final build through filenames and nothing else. Some episode names only differ in capitalisation or spelling changes.

This build has a bunch of interiors and an early design of Springfield in the form of a cut and unused bowling minigame. The interiors can at least still be found in the New Generation release.

There are two similar test maps named Metrics.wii and M_and_L.wii. They differ in some objects and characters that get spawned and the characters you get to control. Metrics is played with Homer and Bart, and M_and_L lets you play as Marge and Lisa.

The church looks mostly the same, the main difference being a missing desk by the main door, different floor color and there being only one staircase in the main room. Chur_Int.wii

Similar to final, but lacking the 2nd fryer behind the counter. It also has Jimbo Jones in the building, whereas in the final New gen version only the Squeaky-Voiced Teen. KRUS_INT.wii

The main difference in the Kwik-E-Mart is a missing shelf and some other objects. KWIK_INT.wii

Objects on the tables such as glasses have actual transparency in this build. In the final version they're opaque. Moes_Int.wii

There are no buttons to open the jail cells. Using the Player > FlyPlayerWithoutCollisions option through the debug menu shows that there is no collision inside those cells yet. POL_INT.wii

Heartburn, also known as Homer Bowling, is a cut minigame where you play with the Homerball, go through a track and end by crashing into a pile of Springfield citizens. It also happens to use an early layout of open-world Springfield. There are many changes found here, but this will just show some of the main recognisable buildings.

Note: Since this map also has a bunch of stuff like barriers meant for the bowling minigame, the Wii screenshots are taken using the Player > FlyCamera debug option inside the game, to get a better view.

Near the Simpsons house there's an extra road that leads to the Springfield General Hospital which doesn't exist in the final game. It is fully removed and replaced by the Springfield Retirement Castle.

This build only has one cutscene, which is an early draft of the Around The World in 80 Bites (80b_01.bik) cutscene. This cutscene, unlike the final game, was animated in 3D similar to the DS version instead of in 2D like the show, as well as having different lines and different camera angles. This early cutscene also contains the song "Oh Yeah" by Yello.

Every other cutscene uses the Rebellion logo as a placeholder. It can also be found in the final build as rebel.bik.

The in-game level select uses early Xbox 360 screenshots as preview images, and some of them remained somewhat similar to what the retail New Generation release had. Five of these survived hidden in the final game, but the rest didn't. They're stored in Frontend.wii\graphics\ui\menus\levels\ as single 512x256 textures, but in the final game they are stored in Frontend.wii\graphics\frontend\ as 256x256 textures, with two of the preview textures combined together. They have been split apart for this.