This page details one or more prototype versions of The Simpsons: Bartman Meets Radioactive Man (NES).

A prototype of The Simpsons: Bartman Meets Radioactive Man, with differences such as changed enemies and a different ending. 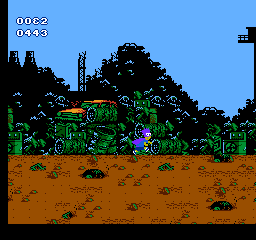 While the game is paused, pressing Up will warp you to a later part of the stage you are on. Pressing Select while paused will show coordinates for your location, Down will make Bartman invincible, pressing Left seems to affect the speed at which the game is running and pressing Right will enable flying, which was most likely used by developers to easily get through the stages.

The green mosquitoes in the swamp were originally cutesy fireflies. They were probably changed because they were unfitting.

The tentacle in the underwater stage had less detailed suction cups in the prototype.

The flying monkey was a pterodactyl in the prototype.

The Swamp Hag was less fierce looking in the prototype.

Interestingly, the hidden credits Easter egg was different in the prototype. Kym and Ted were moved to the right side, Ryan was added, and John and Tony were replaced with Kaitlyn and Phyllis. The spacing on the main credits was also changed.

The ending is completely changed for the final game. Instead of defeating the real Brain-o, the boss turns out to be a fake created by Larva Girl in order to get Radioactive Man's attention. The graphics for Larva Girl partially exist in the final game. It is worth noting that you can move around during the ending in the prototype; this isn't the case in the final version. 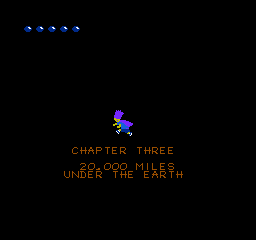 After the dialogue, the game takes you to a glitched Chapter 3.