While buying some jewels for Mr. Burns, Smithers bumps into the Simpson family...causing one of the diamonds to fly into Maggie's mouth! Rather than just taking the jewel out of her mouth, Smithers and his bone-stupid henchmen (that he's always had but you never see on the show) kidnap Maggie! It's up to The Simpsons to get her back.

There are a couple of unused characters in this game.

It seems Principal Skinner was supposed to hand the player a broom sometime in the game. Maybe for a school stage?

The stage 3 bosses have multiple palettes that are the same as the regular enemies.
This could reveal that they were meant to be more common enemies since they watch the Simpsons in the first two levels. https://www.youtube.com/watch?v=fLb_XNSfs-k&ab_channel=IlluminatiDad

There is also an unused Krusty enemy without his mask.

These tiles are used as filler for the player graphics.

These are the filler tiles used for the first half of the object graphics.

This 2x2 filler picture of Krusty is used in the latter half of the object graphics. The correct palette is unknown and may not exist in the ROM anymore.

This is found with the rest of the thrown item graphics, but it's not found anywhere in the game.

This should show up when picking up a health item, but nope.

An early version of Smithers' boss dialogue. This uses a unique dialogue balloon and is in all caps, unlike the final version.

These appear to be status icons for a bomb, a bottle, a can of soda and a slingshot. They were located in the game's graphics, near the character portraits.

This song is hidden in the game's data. It isn't available in the game's built-in sound test, but you can listen to it by loading the game's ROMset in M1 and playing sound code 0xA9. There is speculation that this was an unused boss theme for Smithers, which would be used before the final fight against Mr. Burns. Plus, every time the song loops, it starts to play a little bit faster than before.

The Japanese version is markedly different than other versions. Most of the changes are for game balance issues.
The PlayStation Network rerelease of the game gives you the option to play the Japanese version, so it features all of these differences.

The Japanese version adds two trailing zeroes to the score.

The Score Ranking screen was adjusted for the extra zeroes. The character heads were moved from the score to the rank number. 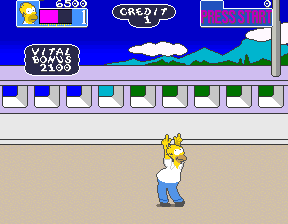 The Japanese version gives players a vitality bonus at the end of each level.

The two bonus games have time bonuses in the Japanese version. These aren't present in the World version. 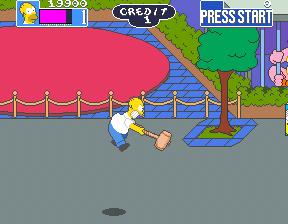 In the World version, weapons can't be used in the air, a restriction not present in the Japanese version. 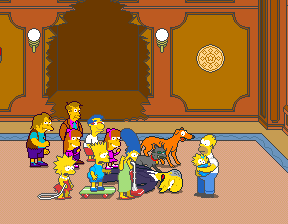