This page details one or more prototype versions of Virtual Bart (SNES).

A very early build of Virtual Bart has been floating around the internet for quite some time, and it has plenty of differences from the final.

Bart in the center of the screen was him in the virtual reality machine.

The kid's last name was added to the name tag in the final.

Another student's full name was put on her tag as well. The space mutant's upper body in the final was darkened, and given the name "DARREN".

In the prototype, the experiment happens behind a wall. In the final game, there's a door to the experiment. "Volunteer Needed" was also changed to "Victim Needed".

Bart wore a dark blue helmet with a pointy antennae in the prototype. His clothes were a less saturated along with some small objects on the wheel (these objects appeared to have been assigned the same palette as his clothing).

The opening cutscene in the prototype appears crude and unrefined compared to the final. Notably, Homer isn't nearly as fat as he should be, the borders surrounding the animation are of a dark yellow-green color instead of black, and the ice cream truck isn't seen out the window.

In the prototype, the first stage music consists of the children's songs "This Old Man" and "Pop Goes the Weasel", each looping eight times before switching melodies. In the final game, it was replaced with the Mr. Softy theme.

The paper airplane enemy was a remote controlled plane in the prototype.

The frisbee was static and had a red dot in the prototype. The final game made it animated and dropped the red dot.

The juggling clown had less detail and a yellow nose in the prototype.

The bouncing clowns were on seesaws in the prototype.

The race with Jimbo and Kearney uses a different background, with different bushes and colors. This section does not have its own music yet, instead playing the circus theme used in the proceeding section. The final game uses a remix of the Mr. Softee theme.

After hitting every student, Bart moons the camera in the prototype. This was toned down to a generic silly face in the final version.

Homer had a green frown face on his swim trunks that was removed in the final, referencing the season 2 episode Brush with Greatness this level was based off of, in which Homer wore similar swim trunks.

The girl in the water slide was larger and had a dark yellow outline.

The lion is drawn crudely with a rough outline compared to the final.

Dino Bart's thigh was more of a straight line in the prototype.

The background is completely different in the prototype, and is only seen in the opening cutscene. The rudimentary nature of the background implies it had just been worked on before being scrapped, with the scene taking place in the actual level later in development.

In the prototype, Jimbo and Kearney just tug on Bart's arms and it ends. In the final, they stretch his arms out. He also had a five o'clock shadow in the prototype. Oddly, Bart's jacket was not recolored in the final. 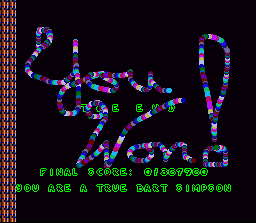 There's actually an ending screen, though it's very sloppy and glitchy. The "YOU ARE A TRUE BART SIMPSON" text remains in the final, but is unused.