This page details one or more prototype versions of The Simpsons Skateboarding.

The E3 demo of The Simpsons Skateboarding is dated May 10, 2002, predating the final US build by almost five months. It was obtained through Hidden Palace's Project Deluge. 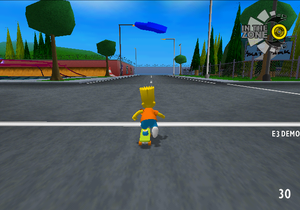 Alpha 13 of The Simpsons Skateboarding is dated June 26, 2002, predating the final US build by about three months. 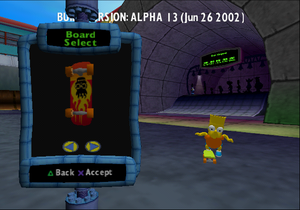 The loading screen is more basic-looking and lacks Bart.

The title screen has copyright info at the bottom, which was removed in the final. Also, the render of the logo is in a noticeably lower resolution.

Every level uses the same preview video, which appears to be an early version of Springfield Elementary.