From The Cutting Room Floor
< Proto:Doom (32X)
Jump to navigation Jump to search

This is the earliest known prototype of Doom for the 32X. 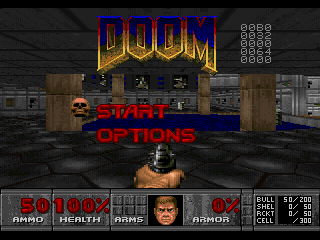 Doom's legendary starting level doesn't see much in the way of geometry changes for the final version, just some minor simplifications.

The most significant change is that tech columns in the room before the green armor are still present in this version.

The gratings that are present near the end in the PC version have already been altered to be windows. The candelabras were given little alcoves in the final version, likely to stop you from bumping into them.

The stairs that are present at the start of E1M2 in the PC version have already been removed in this version.

Instead of having its own (pointless) room, the green armor at the start sits on a computer console, like it does in the PC version. This console was dropped to floor level and the back wall moved to make the final room.

The walls surrounding the secret outdoor section are shorter than they are in the final version and doubled up. This entire section has also been reduced in size.

The switch to open the final area of the level tiles in the prototype, likely because the switch texture used in the PC version was twice as wide.

The stairway after this area had part of the curve removed, making it a straight walk to the exit door in the final version.

The exit room is similar to the PC version, featuring a platform that drops into a small alcove with the exit switch. The final version removes the platform and alcove, moving the exit switch forward.

This level will receive a few minor simplifications in the final version, but the most noticeable change is that the level receives an entirely new, Doom II-inspired texture theme. The secret exit takes you to E1M4 instead of E1M9 as expected.

The walkover trigger to lower the lifts leading to the soul sphere and the switch that raises the walkway to the secret exit is still on the stairway in this version, the final version has two triggers which are closer to each lift.

Nothing has been done to compensate for the lack of masked textures in the beginning of the level. While it looks like you should be able to drop down in several places, any area that originally had a grating is still impassable.

The outdoor donut-shaped walkway is the same as it is in the PC version. The final version raises the nukage surrounding it (making it escapable in the process) and removes the center pool.

One of the more memorable parts of this level in the PC version is when you collect the blue keycard and the lights in the room go out and imps are released behind you. This is still present in this prototype, but will be removed in the final version. A possible reason for this change is because things are always drawn with full brightness in this port, making the darkness pretty pointless as you can still see the imps just fine. 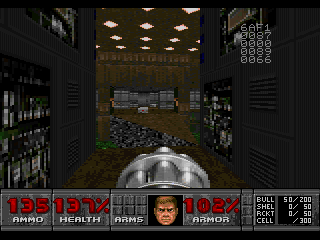 The rising walkway that leads to the secret exit has a line splitting it down the middle diagonally in all versions. This is a trigger that opens the wall in front of you as you cross the walkway. In this prototype, half of the walkway is accidentally assigned the same sector as the surrounding nukage pit, instead of the other half of the walkway's sector, so it does not rise as intended.

The tech columns in the room before the secret exit are still present in this version.

The area beyond the yellow door retains its height differences in this version.

This level also gets a new, Doom II-inspired texture theme in the final version, replacing most of the paneling with brown bricks. More importantly, though, it's the first level that had notable level flow alterations made for the final version. 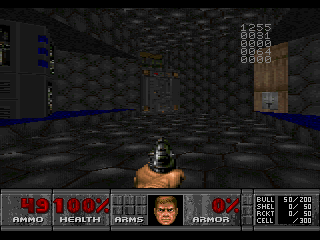 The room in the middle of the two raised corridors was removed in the final version...

...and instead, there is a hallway in its place, which connects the start, the hallways, and the central area together.

Stepping into the square of light on the floor surrounding the blue key is still what opens the circular area's doors in this prototype. The final version replaces this with a switch.

Instead of the standard lower-wait-raise elevator platform used to access the soul sphere in the final version, the one-time-use rising floor from the PC version is still present in the prototype. The switch to activate it is also poorly offset, likely the result of simply replacing the PC switch texture, which was 128 pixels wide, with the one used here, which is only 64 wide, without updating the sidedef's X offset. 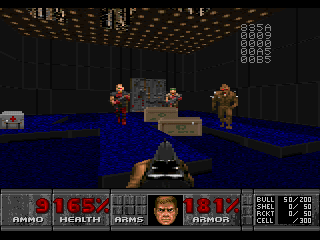 The swastika has already been censored in this prototype, but interestingly, it's not as elaborate as the censorship done in the PC version.

The maze area retains its height variation in this prototype. The final version adds another hall on the western side of the maze, making it much more interconnected than the PC version.

The area near the yellow key and door was simplified slightly for the final version. In the prototype, this area has already been simplified slightly from the PC version: a sector that existed only for detail was removed, and the impassable property was removed from the two openings on the sides of the column, since the masked textures originally used there were removed. The final version raises the floor bordering this area, making them impassable again, however.

The exit switch is also poorly offset in this prototype, again likely the result of simply replacing the switch texture from the PC version without updating its offsets.

Not many changes were made to E1M5's geometry – a few areas were widened, but that's about it.

This level crashes the game. It appears to be identical to the PC version, barring some minor edits like the removal of masked textures. The final version of Level 6 was greatly cut down, so it's likely the level is simply too big for the 32X engine to handle.

This is another level that sees very few geometry changes for the final version – surprisingly, since it's so large and interconnected.

The player 1 start point was moved from the western side of the room to the east.

The ceiling above the yellow door in the eastern side of the level is set too high, meaning the door texture tiles up to the ceiling.

The area leading to the red key is still two separate narrow corridors like the PC version, instead of the single wide one used in the final version.

The large brown pillar in the area before this corridor does not lower when you walk over its trigger. It's set up properly, so the line action itself must be broken in this version of the game.

The blue key sits on the ledge surrounding the floor leading to it, rather than being placed on the floor like the final version.

The item in the secret outdoor area is a blur sphere in this prototype, instead of a second soul sphere.

This level's geometry received a lot of simplification for the final version – here it's identical to the PC version.

The start area still features a nukage pool surrounded by demons and barrels. The frame rate, which is bad throughout the prototype, is absolutely abysmal here. The final version does a complete redesign, featuring zombiemen and barrels on a raised platform. This platform now leads to the computer area map, instead of having to ride a raising/lowering floor to get it.

The secret compartment before the first door still contains a soul sphere in this prototype. This will be replaced by MegaArmor in the final version.

The structures the Barons of Hell emerge from are smaller and unconnected in the prototype. The soul sphere between them is not present. There is also a rendering error with the area of the map open to the sky. The blur sphere, extra computer area map, and barrels were all removed in the final version.

The walls surrounding the star-shaped arena do not lower upon killing the Barons of Hell, so it is impossible to see the outside of the star normally. Looking at the map in an editor reveals that, like the rest of the level, it's identical to the PC version. The final version is significantly cut down: only the "top" of the star opens, the outside area is much smaller, and the stair builder and exit teleporter were given their own room. It also provides teleporters back into the star and area with green armor.

Moving the player 1 start outside reveals that the sky rendering error applies to the entire border of the star. Trying to cross any of the teleport lines will result in the game crashing. Moving the player 1 start into the darkened room that the teleport leads to will also cause the game to crash as soon as the level is loaded. It seems that sector type 11, which damages you and exits the level when your health is under 10% in the PC version, is not functional in the prototype. The final exit teleport is just that, a normal exit, without the "dying" sequence the PC version features.

This level only has one significant difference: The trap in the room with the star is based on the PC version, where monsters teleport into the room after you collect the rocket launcher, but it does not work since monsters in this version only react to sight, not sound. The trap relies on the monsters hearing your gunfire and walking across a teleport line trying to track you down. This trap will be replaced with a simple monster closet in the final version.

The pen full of imps at the start of the map is another example of masked textures not being accounted for, as it looks like the imps are free to escape and you to enter the pen, but blocking lines still prevent this.

The menu text and status bar numbers use a shade of red closer to the PC version, rather than the pink shade they use in the final version.

The status bar is closer to the PC version than the final, placing the arms panel between health and the face, and having keys and a count for all ammo on the right side. The ammo count is actually static, though, as is the face. Numbers for weapons and the key graphics are not drawn on the bar, either.

Many textures are identical to the original PC textures. Most had their width reduced by half and/or were touched up for the final version.

STBAR is an early version of the status bar used by the Jaguar version. It retains the PC version's gray scheme instead of the final brown scheme, but has already been altered to be 40 pixels tall. It has the stat names listed at the top instead of the bottom, and two frag counts printed on the right side of the bar. The final Jaguar version stores the panels for the frag counts in a separate graphic, STBARNET, which is drawn over the arms and area panels when playing multiplayer.