From The Cutting Room Floor
< Proto:Doom (PC, 1993)
Jump to navigation Jump to search 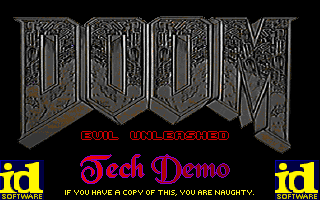 Version 0.2 of Doom dates back to February 4, 1993. At this point, Doom is little more than a tech demo, as only two months of work have been done. 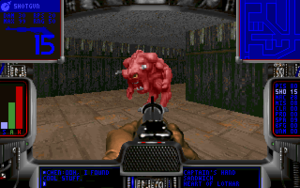 The only map you'll ever see in this build. 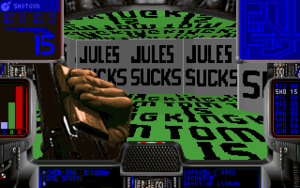 There was a lot of tension between Tom Hall and some of the Id guys during development (Jules being Adrian Carmack). Hall left before the game's release.

At this point in development, several weapons were planned but eventually cut. All of the weapons are documented in the Doom Bible. Everything but the shotgun can only be seen through hacking the .wad. Weirdly, there are no references to the chainsaw or the plasma launcher in this build.

The Knife would have been an attachment for the pistol, but it did minimal damage. Its main purpose was to be used during close-up combat.

The Pistol is also present in the final, but as mentioned above it would have a knife attachment.

Also in the final, the Shotgun although its silhouette is a bit different at this point.

The Machine Gun's sprite is like the one from Wolfenstein 3D.

The Missile Launcher's sprite from the 0.4 build looks exactly like this build's silhouette.

The Dark Claw would have drained life from enemies, but it seems like the developers deemed the weapon redundant.

The Probjectile would have little fire power, but also gave stats on enemies. It did not get any farther than this.

Would have been as powerful as the shotgun, but with a wider spread of fire. Again, this is the most iD ever did.

The BFG 2704's silhouette is identical to the sprite found in Doom 0.4.

The Unmaker would have been used in the commercial version to hurt enemies, depending upon what type they were. A similar demonic weapon was used in Doom 64, although it was not intended to be the Unmaker according to the developers[1] and functions completely differently.

The shotgun is slightly different from the final. Notice that the player has sleeves when it is used.

Aside from the re-coloring of the mouth and eyes, the Imp appears to be identical to the final version.

The Demon's teeth were made bloodier, and the poses are different. The sprite was re-shaded, and the eyes were redrawn to look like they're glowing.

The Baron of Hell's walk cycle is close to the final, but the horns were made darker and some shading around the shoulders was tweaked for the final game.

'FLAT1' was renamed 'FLOOR0_1' in subsequent builds with lighter shading and thicker outlines.

The rest of the flats are unique and don't appear in any other build of Doom.

The palette color ranges in PLAYPAL (the actual 256-color VGA palette), while not precisely final, largely resemble their final counterparts in the retail game. The palette only saw nearly-unnoticeable tweaks leading up to the final game, with the exception of colors 3-15 being unused in this prototype and some of the latter color ranges being moved around. In addition, the PLAYPAL data in this prototype only contains one palette, while the final version contains 14 (for things like the red haze when the player takes damage, or the yellow haze when picking up items).

This is probably debug text for the CPU to see how the program crashed.

Compiler leftovers scattered throughout the executable.