This is a sub-page of Proto:Duke Nukem 3D (PC). 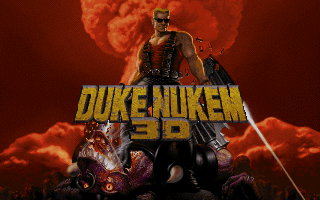 Duke Nukem 3D 1.0 is the first official shareware version of Duke Nukem 3D released by 3D Realms. It was sent out to the world on January 29th, 1996. While much closer to the final game than 0.99 is, there are still some minor differences.

This prototype still contains code for the Snake Head enemy, the DUMMYDUKE bosses, BOSS3, and Flamethrower. Ammo pickups for the Shrinker also gives 1 round of Shrinker ammo, like in 0.99.

The ability to activate the crosshair and mouse aiming are still not in this version of the game.

The RPG still does only 120 damage instead of 140. Oddly, the Pipebomb has had its damage values bumped to its final number.

The Battlelord now has his final amount of health.

The help screen has several differences.

The title screen background is similar to the one in 0.99, but has Duke's mouth fixed.

The rocket fired by the RPG uses the final's colors, but is still tilted, like the 0.99 design is.