This is a sub-page of Proto:Fire Emblem (Game Boy Advance).

The newer of the two Fire Emblem prototypes. This prototype is timestamped as February 19th, 2003, at 10:10PM putting its assembling a mere two months before release. It is over all really close to the final release, but it does feature plenty of different graphics and other differences from final and the earlier prototype.

The prototype can be pretty much played start to finish, and has the vast majority of, if not all, story dialogue and scenes implemented.

Several of the newly implemented weapons and items still use placeholder graphics (generally shared with other items). Some items also have different names and designs than final.

Work-in-progress versions of Merlinus's graphics used during his promotion scene in the final game are present. These appear to be unused as of this revision as Merlinus is not yet able to be added to the party. This particular graphic appears to only be present in the 0219 revision. They have 仮 (temporary) written on them.

This prototype also has a fairly extensive set of debug features.

A lot of this stuff is identical or very similar to the debug menus in The Sacred Stones's prototype, give or take a few things. 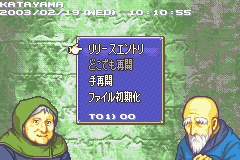 Upon starting the game, it immediately goes to this boot-up menu without much fanfare. The commands available are:

There are three variants to the test map in the chapter select, each activated by a held button.

Yes, the L button (once again) is awesome enough to have its own section.

The L shoulder button allows access to one of the more interesting and most versatile debug functions. These functions vary on where it is used.

In a unit's stat screens it can be used to modify just about any variable a character can have. To change a stat, press L, and a little hand will appear, probably pointing at the Str or Mag stat to start. Place the hand over what you want to change by using any direction on the D-Pad. Once on the desired stat to change, hold A then press Left or Right on the D-Pad to decrease or increase that stat.

If the L button is used like this on the character's inventory, every item and weapon in the game is accessible. In this instance pressing Left and Right while holding A scrolls through the entire game's items in their internal order.

If used on the status screen during a chapter, the player can give themselves a large amount of money or set the chapter's turn count. 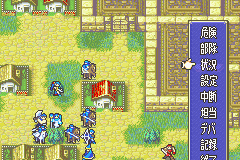 Hanging out with the regular options in the map menu are several debug commands. 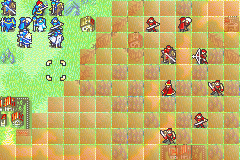 The デバ (Debug) menu mentioned above has several options appear in a new window. 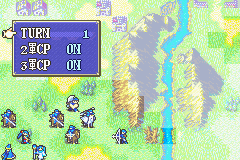 Hold Select and press Start twice with the cursor on an empty space. This opens a small window that contains the following. 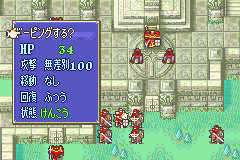 To open this menu, hold Select and press Start twice with the cursor on a character. The menu includes: 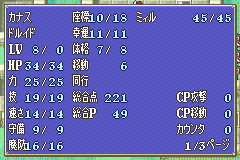 Hold Select and press the R shoulder button while the cursor is on a character, this will open an alternate set of stat screens. These screens have the same data and more as the regular stat screens. 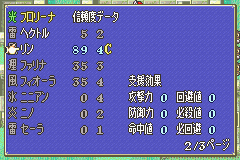 On page two, the one displaying a character's possible support partners, pressing the L or R shoulder buttons brings up a hand cursor over the names of the support partners. Pressing Left or Right decreases or increases support points, which, for whatever reason, don't increase normally in this build. 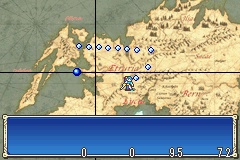 When entering a chapter with world map narration, hold the L shoulder button the game will load the game's map with a coordinate viewer with some other features.

Miscellaneous combinations that cause useful (or not so useful) effects, though they in themselves don't bring up any menus.

Very usefully, the prototype has a "win the chapter" button combination. Press and hold the R shoulder button and B at the same time, then press Select twice. After this is done, the game will skip to the current chapter's ending scenes.

Holding the L shoulder button before pressing A to enter the game's Sound Room auto-unlocks everything in it.

On the startup menu's chapter select hold the L shoulder button when entering a chapter to disable the game's forced tutorials. Though you'll have to exit the world map debug first to get to the chapter.

If you, for some reason, didn't disable the tutorials you can break out of a forced tutorial with another button combo.

Hold any direction on the D-Pad, then also hold A, B, Start, and Select to exit the current forced tutorial segment. Be careful, this button combination includes the combination for a soft-reset in it, if you don't hold a D-Pad direction first the game will probably soft-reset.

It's not super useful, as the game will sometimes force you back into the tutorial again depending on what part of the tutorial you exited. This is actually in the final release, too... Who knows why it was left in?

Holding the L button while going to the title screen (either by skipping the intro or backing out of the menus) causes the logo's fly-in animation along with the sword and axe to play. Usually when backing out of menus and such the logo fades in without movement.

While this sometimes displays when the prototype experiences an error, it can be brought up at the player's discretion by holding B, the R shoulder button and Right on the D-Pad.

Contains information relating to the state of the game, such as the status of the save files, playthrough count, and status of the tutorial and sound room. (And other things this editor is not smart enough to understand.)

Enter the Fire Emblem: Fuuin no Tsurugi transfer screen from the Link Arena

This seems to be more of a glitch than actual debug feature, but when in the Link Arena menu press Select and R, and the game will go to the Fuuin no Tsurugi linkup screen. This doesn't seem to do anything useful and produces odd glitches.