A demo disc of Jak II that was distributed at E3 2003, but is not the same demo that was playable at the event. Two missions are playable: "Protect Sig at the pumping station" and "Destroy eggs in strip mine". It is dated March 15, 2003 while the final game is dated August 25, 2003. 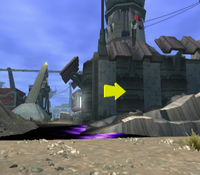 The appearance of Dark Jak is the same as in the final game, but the powers and moves have some differences.

The dive attack leaves a red-ish cloud on impact, which slowly fades away, similar to the Scatter Gun's cloud from the same prototype. 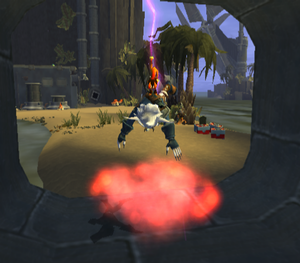 While in the final game the Dark Powers are activated with the buttons used for regular physical attacks and movement, in this prototype they are activated with the D-Pad. A HUD on the top-right is used to display what each of the four D-Pad buttons' functions are, although the icons used for the powers are vague in what they are supposed to represent. There are also four inventory flags in the game's memory used for unlocking Dark Powers, all of which also make the HUD appear. However, only one of these inventory flags actually unlocks a power (Dark Bomb, activated with the Up button), making its icon brighter. 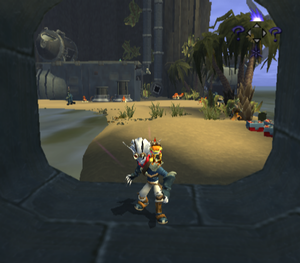 The Dark Bomb itself does not have any noticeable differences from its final game counterpart, apart from that it makes Jak collect pickups that are touched by the bomb's impact, and that Daxter is in a T-pose during the animation. 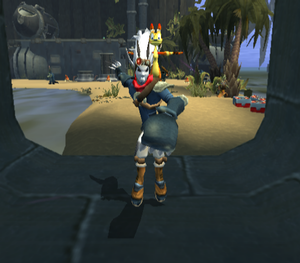 The Scatter Gun produces scattering, red clouds and also has the laser for aiming. It is otherwise identical to the final game.

The Blaster shots are visually different and make a different sound effect, but function the same as the final game.

It is referred to as 'Power Blaster' in this prototype: 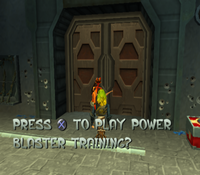 The Vulcan Fury gun can be used through hacking. It has minor visual and audio differences and also has an issue where it often points at a downward angle, which was fixed in the final game. It also appears to fire more slowly in the demo.

A weapon called the Boom Stick, which would later be replaced with the Peace Maker in the final game, can be used through hacking. It fires small grenade-like objects with a trail resembling dark eco. The projectiles create a large explosion that can send enemies flying and also has the ability to hurt Jak. It is difficult to aim properly and the projectile often bounces off surfaces. It does not create any sounds when used, suggesting it was at an early stage of development. 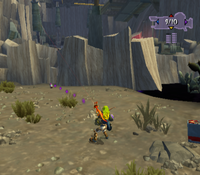 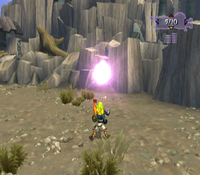 Concept art of the weapon can be viewed in the "Mega Scrap Book" in the final game: 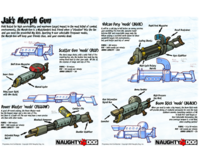 There are several unused menus in this prototype that can be accessed using hacks. 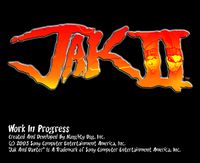 WOMDRAWN.STR is a 2048 x 3840 pixel image of the world map from The Precursor Legacy with a number of other drawings added to it. The image is stored as 128 x 128 pixel blocks, has a total of 128 colors and does not have a known palette. The image on the right uses a mock-up palette based on scans of the original map which came with the Precursor Legacy instruction manual. 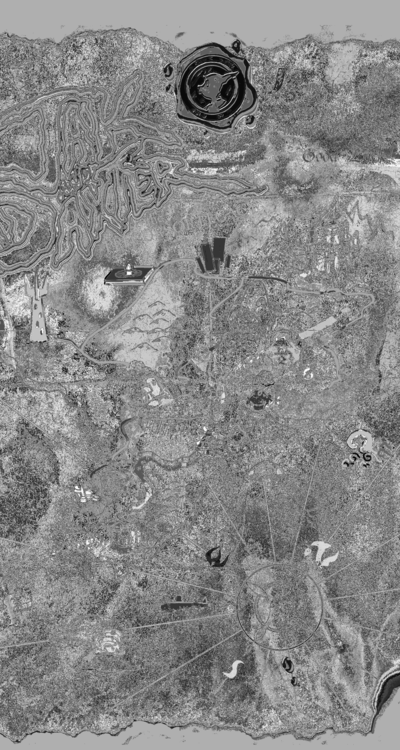 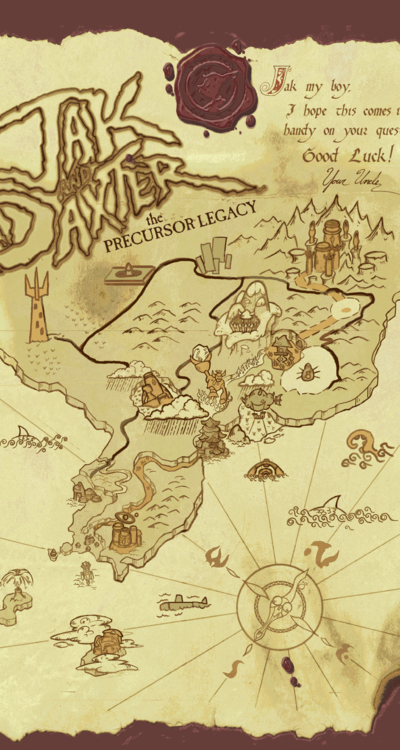 WOMEMPTY.STR is the same image but with all pictures except the background removed. It is also stored as 128 x 128 pixel blocks but unlike WOMDRAWN, it has a total of 256 colors. Likewise, this image doesn't have a known palette with the image on the right using a mock-up palette instead. 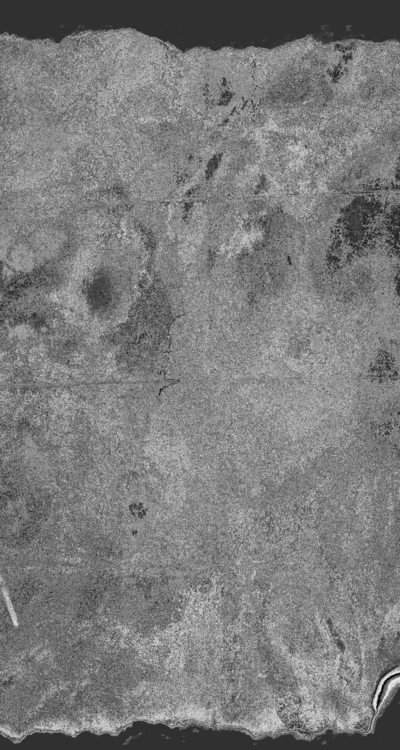 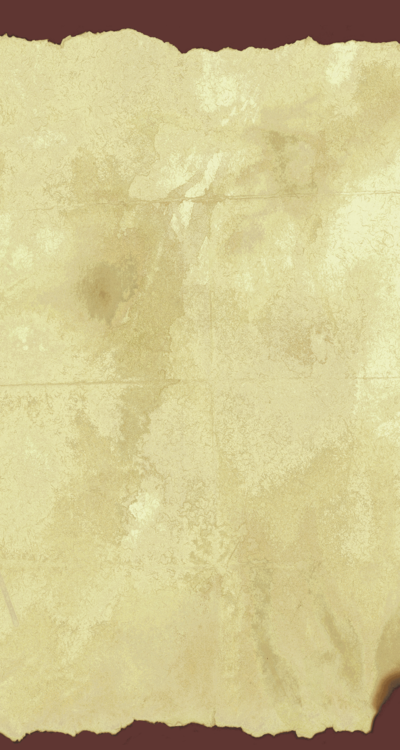 The following dialogue is unused in the demo with the files completely removed from the final game.

Like in the Precursor Legacy demo, much of the dialogue with distortions, such as through communicators, is unedited, while a large amount of cutscene audio doesn't yet have the background sound effects.

The file 0COMMON.TXT has unused text that differs from the file of the same name in the final game. All text in this version is in capital letters like in The Precursor Legacy, while in the final game capital and lower case letters are used more appropriately.

Much of the text refers to the game as "Jak and Daxter" instead of "Jak II", including the text used when the disc is removed.

Other text, including where the Blaster gun is called the "Power Blaster" as seen in the same concept art featuring the Boom Stick. (NB: The symbols for buttons are represented by long strings of text and have been changed to [button] here for convenience.)

Retrieved from "https://tcrf.net/index.php?title=Proto:Jak_II/E3_Demo_Disc&oldid=1131501"
Categories:
Cleanup > To do
Subpages