This page details one or more prototype versions of Just Cause 3.

An early build of Just Cause 3 was leaked in early 2020. Compiled on June 24, 2015, it features a ton of dev and debug tools, 24 test areas in the form of additional islands, a few differences in terrain, smaller differences here and there, and clues to even earlier versions of the game.

Can be accessed from the pause screen by pressing E, and lets you do quite a lot of things like spawn vehicles and weapons, teleport to bookmarked locations and more. Pressing R once it's up already will bring up a second, smaller page.

It can be force enabled in the final game via the pause menu file. It shows up mostly like it would in the beta. Some of these features sadly don't work anymore though. 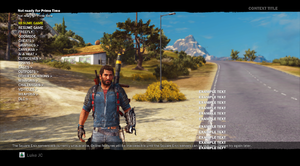 The dev menu once enabled in the final game.

For a detailed showcase of the dev menu, see here. To get the dev menu in the final game, use this unreleased mod.

The debug menu is a much larger menu and can be opened by pressing F9. The initial page shows: 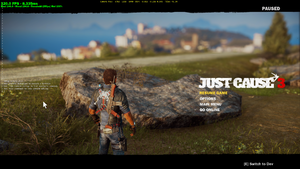 The debug console once opened.

Pressing the tilde key, you can open the beta's debug console. It presents you with the version number, here 1.0, and three tips on how to use it:

The first option tells you how to execute a buttfile. A buttfile can be compared to a batch file under Windows. You can create one by creating a txt file in the install location of the game and changing the file extension from .txt to .butt. As for commands you can use, you can use the same commands as you'd use for the debug console. As an example, the console has the command add_menu_event <eventname>, which lets you add a game event to the debug menu. The events you add will show up under a new "Events" tab. So say you want to add the player kill event from the console, you'd enter "add_menu_event ply.kill". It is now available to quickly trigger from f9 > events. But say you want to add a bunch of events. You could then create a buttfile and enter commands to add several events. Then simply execute the buttfile using "execute events.butt" as an example and you got all your events ready with just one command.

The help command is used just like the list command, entering "help send_event" as example gives us its usage, which would be "send_event <event name>". So the command allows us to call any game events.

Just Cause 3 was meant to have a built in multiplayer mode, but like the microtransactions, it was cancelled. Apart from some leftover multiplayer code that was used by nanos as reference for the Just Cause 3 Multiplayer mod, nothing really is left in the final game. The debug menu however shows a multiplayer option in the dev submenu.

Opening the multiplayer submenu, you can see the options:

Pressing the latter two does nothing visible. The debug submenu has the options:

It has been tested by two persons on the same virtual network, but none of the options here can be used to communicate to another game on the same network.

Going into the debug menu's "spawn" section, you get presented with a bunch of categories, one of them is "main_characters". Going here, we can see an additional character, called Salvatore, mc_salvatore in the menu. He looks just like one of the concepts for one of the mafia faction's members, which was also cut. One concept image also shows him and Looch next to each other. This character is not in the files of the final game anymore, the file that has spawn names and paths to character files however still lists mc_salvatore.

On test island 24 on the far left there is a collection of all chaos objects. One of them is the completely unseen oil pump, similar to the ones in Just Cause 4. It has simple textures, working animations, and can be properly destroyed.

On test island 13 you can find a series of buttons that trigger random encounters for testing. One of them triggers "cast away (has been cut)". It is basically the opposite of grounded boat. A rebel in a boat is stuck on the water because the engine broke and you have to tow it to land. It looks to be unfinished however, as bringing the boat onto land does nothing. Instead of instructions in the top right, it just says "LOC: 1675637260). 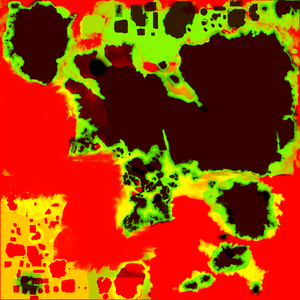 The water mod texture of the beta.

Just like for the regular game, the beta too has a texture revealing landmasses that don't exist in it anymore. For the final game we could see the terrain of this beta. The file found here shows another range of test islands, this time in the bottom left.

Just like lacrima overlaying the test areas of the beta in the final game, boom island overlays some of them, but was not in the game at this point.

In the beta, around the big cut off areas of the main land, you can still see shallow water, similar to the top right test island and the final game.

Near boom island in the beta you can actually find leftovers from an earlier test island. Making a mod that shows these even earlier test islands on the map, we can also see which one it was. Teleporting to "Test_Ground_material_sound" in Bookmarks > Test Areas brings you to a floating grid with names displayed over each area what sound it would make. Sadly it doesn't make any sounds since there's no ground there anymore.

Launch options for Just Cause 3 are used to load mods in the final game, to do that, you would use --vfs-fs dropzone --vfs-archive patch_win64 --vfs-archive archives_win64 --vfs-fs . with "dropzone" being the name of the folder mods are loaded from. The beta loads mods from dropzone by default, but also has a lot of other launch options:

The final game actually still has the --autorun_buttfile= launch option, but due to all debug console commands being removed, this option is pretty much useless.

In the beta's image files, you can find three previously unseen concept images.

One of them shows the old ship at the rebel cave, though it's in one piece instead of being broken apart. There's also a small port next to it.

The next one shows a giant warship, which probably became the corvette warship, though the one in the concept is many times bigger and looks to have emp cannons and trucks with trailers.

The last one might as well be Just Cause 4. It has a way bigger mountain region, a bigger base and a plane that looks super similar to Just Cause 4's Thunderhead bomber jet with folding wings.

Instead of having a transparent background like in the final game, the map screen in this build has an image as a background. The other map tabs have some design alterations as well.

While in freefall, the camera shakes like it did in Just Cause 2, which is probably just a leftover.

Vehicles in this build do have a very different offroad driving sound. It's much louder than it is in the final game. Additionally, when you drive a vehicle in water, you leave it automatically after a few seconds, similar to Just Cause 2.

Going underwater in the beta you can see it is less green and more blue. It also looks like there's less of a filter over it.

Every item in the rebeldrop menu has a preview video. Most videos in the beta are not final and give us a look at even earlier versions of the game! Even though these videos are pretty low resolution, they still show us a lot of information.

Rico's appearance for Just Cause 3 was altered over time as well. One of the videos shows him with a slightly different looking face.

A few videos also show earlier revisions of the game's UI. One of them show a quite different layout from even what we can see in the beta and another one showing the map screen, but the window of the map being angled to the right. Another video shows a different speedometer on both a plane and a boat.

These videos also reveal earlier versions of a few vehicles, like a pretty different looking rebel Obrero tuck. But we also get a look at the before known of Vistosa without spoiler and dust free police car actually in-game.

Weapons seem to have been finished pretty early on, at least for the most part, we can still see a few differences, like the CS Negotiator having a front grip, slightly differently coloured UVK rocket launcher and a CS Spectre Mark V with lasers.

Chaos objects didn't see any drastic changes that we know of, besides the sphere tank, which was completely white instead of silver-gray.

In one of the videos we get a view at the snowy mountains of the main island. They look to be very unfinished at this point and consist of simple shapes and plain white. Another video shows what seems to be Babica, the terrain however looks to be a desert instead of grass. There is also no desert in the final game. Another video supports that some areas, or potentially the majority of Medicí would have been in a desert is shown in the entire mainland with desert terrain in the background.

The entirety of these early videos can be found here.

Retrieved from "https://tcrf.net/index.php?title=Proto:Just_Cause_3&oldid=947359"
Categories:
Cleanup > To do
Games > Games by content > Prototypes
Games > Games by series > Just Cause series